Increased Demand For Vaccines Will Continue To Benefit CMOs

At a time of year when flu season is usually winding down, news of a new form of bird flu has emanated from China. The strain was identified as H7N9, which had not been found in humans before. However, it took the lives of two Shanghai residents in late March. Initially, H7N9 was thought to be a low-pathogenic strain that was not easily transmitted between humans. But an expert from WHO has now expressed concern that the strain does show signs of mammalian adaptation. This news reminds us all too painfully of the recent swine flu pandemic, which killed 284,500 people in 2009 according to the Centers for Disease Control and that the possibility of a global pandemic is real.

This news came after a particularly rough flu season, where increased demand for the flu vaccine created spot shortages across the United States. According to industry research released by Kalorama Information, the vaccine market has grown from $5.7 billion 10 years ago to exceed $27 billion currently. Increased global demand for the influenza vaccine has contributed significantly to this growth because the vaccine does not offer long-term immunity and must therefore be administered annually.

Each year, infectious disease monitoring organizations worldwide coordinate with vaccine manufacturers, fill/ finish suppliers, distributors, and healthcare practitioners to try to ensure the parameters are in place to meet demand. The large market for the influenza vaccine brings two key vaccine production issues to the forefront — time-to-market and cost.

Vaccine Contract Manufacturing Market Growing
Improving time-to-market and reducing costs consistently rank among the top three reasons behind decisions to outsource work to a CMO (alongside improved quality). While vaccine production has historically been retained in-house for quality control and regulatory reasons, the evolving nature of outsourcing — from an ad hoc basis to more long-term partnerships — means it is highly likely we will see growth in outsourced vaccine manufacturing. Current predictions estimate the vaccine contract manufacturing market will reach $620 million by 2015.

In reviewing the data from Nice Insight’s pharmaceutical and biotechnology outsourcing survey, we looked at how CMOs offering vaccine manufacturing scored on productivity as it relates to improved time to market and affordability, since decreasing manufacturing costs can positively impact product price. Two companies scored in the top five for both productivity and affordability — GSK Biopharmaceuticals (76% and 71%) and OSO BioPharmaceuticals (75% and 71%).

The remaining CMOs to rank in the top five for productivity were Fujifilm Diosynth Biotechnologies (80%) — the only company to receive an “excellent” score in productivity — Althea Technologies (78%), and BioReliance (75%). For affordability, Cytovance Biologics (73%), Cook Pharmica (71%), and IDT Biologika (71%) joined GSK Biopharmaceuticals and OSO Bio in the top five providers. It is important to note that GSK Biopharmaceuticals was the only company to rank in the top five for quality in addition to productivity and affordability. However, the companies that ranked highest in productivity and affordability tended to score above the benchmark in quality, meaning these businesses still performed above average among their competitors.

Interestingly, there were no strong patterns across the 20 CMOs included in this analysis. Twelve different companies comprise the top-five lists for each of the six outsourcing drivers, with only one company scoring among the top five across all six categories — GSK Biopharmaceuticals. As such, finding the right CMO for a specific project will vary depending on factors specific to the vaccine.

In the case of the influenza vaccine, improved time-to- market and affordability are key to reaching a large population on an annual basis. Another benefit of CMOs adding vaccine production is increased capacity, which will reduce the potential for vaccine shortages, including those caused by the need to shift production of seasonal flu vaccines to the manufacture of vaccines for new threats like the H7N9 bird flu. 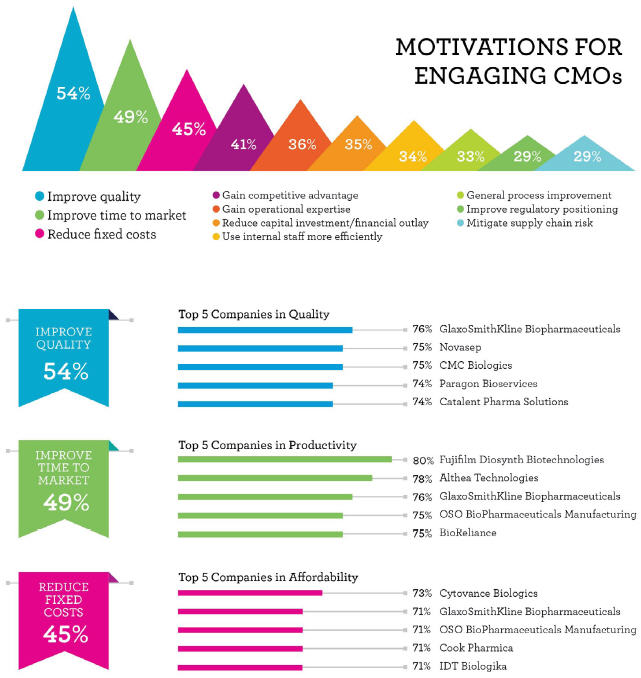 Survey Methodology: The Nice Insight Pharmaceutical and Biotechnology Survey is deployed to outsourcing-facing pharmaceutical and biotechnology executives on an annual basis. The 2012 sample size is 10,036 respondents. The survey is composed of 500+ questions and randomly presents ~30 questions to each respondent in order to collect baseline information with respect to customer awareness and customer perceptions on 170 companies that service the drug development cycle. More than 800 marketing communications, including branding, websites, print advertisements, corporate literature, and trade show booths, are reviewed by our panel of respondents. Five levels of awareness from “I’ve never heard of them” to “I’ve worked with them” factor into the overall customer-awareness score. The customer perception score is based on six drivers in outsourcing: Quality, Innovation, Regulatory Track Record, Affordability, Productivity, and Reliability.

If you want to learn more about the report or about how to participate, please contact Nigel Walker, managing director, or Salvatore Fazzolari, director of client services, at Nice Insight by sending an email to niceinsight.survey@thatsnice.com.