Innovation Capital: How Do Leaders Win Support For Their Ideas?

If you approached your shareholders, an investor, or employees and told them you wanted to drill tunnels underneath Los Angeles, they would probably think you are crazy. But somehow when Elon Musk proposed an idea which had been around for decades to do precisely that, investors opened their pockets and people quit jobs to form companies to do exactly that. Why? Because Musk and the other leaders of innovation we’ve studied have something other leaders do not. We’ve all seen leaders who excel at winning resources and support for their ideas. It turns out that this quality is so valuable and measurably more important for innovation than just being creative that it has a name: innovation capital. And it matters much more than most of us realize in gaining buy-in for ideas. The truth is that, although innovation depends on good ideas, having a big insight is only half the battle. Many potential innovations die, not because the idea is bad, but because innovators can’t win support to turn their ideas into reality. We call it the innovator’s paradox: The more groundbreaking your idea, the greater the risk, and the harder it is to win support. Potential sponsors for the idea want you to reduce the risk. But you need resources to push the idea forward. So how can you overcome the innovator’s paradox?

THE 4 SOURCES OF INNOVATION CAPITAL

We interviewed some of the world’s greatest leaders of innovation — including superstars like Jeff Bezos, Elon Musk, and Mark Benioff — and found that they don’t leave it to chance. Instead, they purposefully and thoughtfully build up their innovation capital so they can use it to bring innovations to life. Innovation capital isn’t tangible, like money or equipment. It is an intangible force, like political capital, that helps you win backing for your ideas. We found it comes from four sources.

First, innovation capital comes from who you are — what we could call your innovation-specific human capital. That may sound simpler than it is. The leaders we studied demonstrated three specific qualities: forward thinking, creative problem solving, and persuading. Forward thinking means spending time envisioning the future, and then positioning yourself to be there. Creative problem solvers tackle problems proactively with ingenuity and determination. Finally, these innovators build up their creative and persuasive abilities in order to sell people on their ideas.

The second source of innovation capital comes from who you know, or what we would call your innovation- specific social capital. Who do you know, such as investors, innovators, or others in your network, who can support an idea? 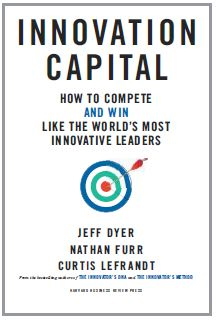 Third, innovation capital comes from what you are known for, or your innovation-specific reputation capital. The best way to build this is by gaining some experience as a founder or leader of an initiative. You also can build innovation capital by tackling difficult projects and getting noticed for being good at strategic prioritization or just being scrappy and efficient with resources.

Being successful as an entrepreneur or innovator requires conscientious thought being applied toward building your innovation capital. Because innovation capital isn’t something you are born with, it’s something hard to build and, if not careful, easy to lose.

NATHAN FURR, PH.D., is an assistant professor of strategy at INSEAD, where he teaches innovation and technology strategy.