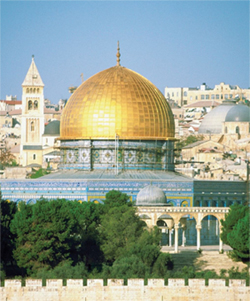 Israel has been called, accurately, a nation of start-ups. With its scientifically oriented population and entrepreneurial drive, the nation is driving Middle East biotech. Approximately 60 percent of Israel’s life sciences companies focus on medical devices, while about 35 percent focus on biopharmaceuticals. Typically, 40 to 60 biotech companies are founded each year.

Per capita, Israel has the most biotech startups in the world. Entrepreneurs make up 6.4 percent of the population. Israel has one of the highest concentrations (1.45 percent of its population) of scientists in the world — a percentage that was enhanced by the 1990s’ influx of Soviettrained scientists and engineers. To put this in context, the percentage for the U.S. is 0.81, according to CORDIS, the EU’s Community Research and Development Information Service.

BioPharma Presence Grows
Benny Zeevi, co-chairman of the Israel Advanced Technology Industries (IATI), characterizes the Israeli life sciences industry as “relatively young, rapidly growing, and exuberant.” Currently, more than 800 life sciences companies operate in Israel, and nearly two-thirds are less than 10 years old. More than a third already generate revenue. The Israeli life sciences industry is dominated by the medical technology industry, but the pharmaceutical field is growing. In March, ClinicalTrials.gov reported 4,013 clinical trials were currently underway, up from 3,000 a few years ago. (This figure includes trials conducted in Israel by international companies.) That’s 70 percent of all the clinical trials conducted in the Middle East.

Many of Israel’s biopharma companies have grown beyond the one-man-and-a- lab stage. About 30 of the companies are midsized and are beginning to make their marks. For example, Protalix Biotherapeutics is using its proprietary plant-based expression system to develop enzymes used in treating Gaucher disease. Its product, Elelyso, recently received regulatory approval in the U.S. and Israel. Five other compounds are in the pipeline. The most advanced is entering Phase 2 trials. Another firm, Gamida Cell, expects to launch its stem-cell-based leukemia therapy, StemEx, in 2013. Five products are in its pipeline. Cell Cure Neurosciences is working to develop OpRegen for agerelated retinal degeneration. Human trials are ongoing.

Late-Stage Financing Needed
Funding is, perhaps, the biggest challenge for biopharmaceutical companies in Israel and throughout the world. Israel boasts 25 to 30 active VC firms but only about 10 actively invest in biopharma. One, Pitango, has $1.4 billion under management and includes 16 life sciences companies in its broad portfolio. Additionally, in 2011, Merck Serono launched the Merck Serono Israel Bio-incubator Fund. The purpose, according to Merck, is to “accelerate the successful development of entrepreneurial start-up companies.” It offers seed financing and the opportunity for researchers to use a dedicated part of Merck Serono’s Israeli research and development center, Interlab, for their own projects. Over a seven-year time span, Merck Serono plans to invest a total of 10 million EUR into this fund.

To help bridge the funding gap, the Israeli government established the Heznek venture capital fund in 2002, with a focus on life sciences, software, and communications. The organization matches the capital funding secured from outside investors or investment entities, providing matching funds peak at 50 percent of the total capital requirements, and do not exceed 5 million NIS (New Israeli Shekel, the currency in Israel) — about $1.3 million. The fund invests in companies that are less than six months old with less than 1 million NIS in expenses. The government’s investment is exchanged for shares in the company, which the matching investor may purchase at the original price (plus interest) during the first five years of the investment.

Nonetheless, like most young biotech companies, Israeli firms need additional financing. As Zeevi says, “To become a global company takes time and a lot of money. We have almost no latestage funding.” Companies need this influx of cash to take them all the way to commercialization or, at least, to the point at which licensing or mergers or acquisitions become feasible.

Among firms funded by venture capital, “For pharma/biotech companies, licensing is the most probable funding and exit strategy,” Alon says. “For medical device companies, the most common exit is via mergers and acquisitions.”

The exit strategy for medical devices, however, is shifting to licensing as the costs of trials leading to commercialization increase. “The structure of licensing deals gives the acquirer better control in validating the value of the assets it is interested in buying,” Zeevi explains. Acquisitions may evolve from those licensing agreements.

Governments Offer Incentives
The Office of the Chief Scientist (OCS) is a good starting point for companies interested in investing in Israeli biotech. That office is a function of Ministry of Industry, Trade, and Labor, which is charged with executing government policy to support industrial R&D. To attract biotech specifically, the government is establishing a new biotech incubator to help attract large, international pharmaceutical companies to Israel. This bio-incubator will join the more than 20 incubators or accelerators in Israel. “But not all include biopharma,” Alon points out.

Israeli biotech can count on “significant government support” from that office, Zeevi says. Multiple programs and incentives are available. “But,” Alon cautions, “that is mainly initial funding. Companies must develop additional funding sources.”

Much of the support comes in the form of tax incentives for local and foreign investment that significantly reduce the corporate tax rate. “These incentives for approved enterprises are included in the Encouragement of Capital Investments Law, which took effect January 1, 2011,” Alon says.

As in the United States, Israel levies taxes on the global income of companies incorporated there, and on the income of foreign companies operating there. However, it has tax treaties with many nations, including the U.S., to avoid double taxation. The corporate tax rate for 2013 is 25 percent. Income tax rates on individuals increased January 1, 2013, and the tax burden for individuals and corporations appears to be in flux.

Most of the universities have ties to the industrial parks that are home to R&D centers and laboratories for some of the world’s leading life science companies. Additionally, an OCS magnet program forms consortia composed of university research departments and high tech companies in multiple fields, including biotech. Consequently, investigators are cognizant of requirements for scale-up and commercialization and are likely to consider them during the early stages of project design.

According to the Worldwide Intellectual Property Organization’s (WIPO) list of educational institutions filing patents, Hebrew University ranks 23rd in the world in the number of total patent filings in 2011, with 52. Tel Aviv University holds 33rd place, with 43 patent filings. In terms of academic ranking, Hebrew University, Tel Aviv University, Technion, and Bar-Ilan University are among the world’s top 400 universities, according to the British weekly magazine, Times Higher Education. Consequently, corporations working in Israel have ready access to innovative employees trained at world-class institutions.