It’s 5:30 p.m. on Wednesday, June 5, 2019, at the BIO International Convention and Conference in Philadelphia. Up an escalator and down a side hall of the convention center, you’ll find a temporary office for BIO’s newly elected board-director chair, Jeremy Levin, DPhil, MB BChir, CEO of Ovid Therapeutics. Believe it or not, we talked about a wide variety of things, including tractors and farm equipment. This is because, in addition to being a doctor, a CEO, and the chair of BIO for the next two years, Levin also raises certified Aberdeen Angus beef cattle, making him a farmer as well. So we sat a spell and chewed the fat toward the end of a day that was still far from over. Had we some rocking chairs, overalls, and tall glasses of lemonade, we’d likely never have gotten around to whittling away at some of biopharma’s biggest challenges, which we did, beginning with biosimilars.

I think perpetual franchises are the enemy of innovation, and these need to be called out. The way to encourage innovation is if everybody in the company is incented on two fronts, helping patients and creating new and better products. If a company uses patent thickets to protect the old and the not-so-good-but-still-profitable biologic to prevent competition, it does two things. Number one, the company becomes dependent on that old product internally, and that inhibits being able to create a culture of innovation. Number two, you prevent others from bringing cheaper biosimilars to the marketplace, and in doing so, do not benefit patients. The concept of protecting an old biological asset by multiple incremental patents is not the way to stimulate innovation. It’s very important to resolve this matter expeditiously. First-generation biologics and the biosimilars, which will replace them, are just the beginning. On the horizon we have bifunctional antibodies, payload-armed antibodies, peptides, gene therapies, and CAR-T. What do you think a patent thicket will look like for those? This wave of biological innovation is the reason why we have to get this sorted out. If we don’t deal with the challenge of biosimilars now, we’re going to run into great difficulty in the future, because these other, much more complex biopharmaceutical programs present the opportunity to erect walls of patents to protect — potentially forever — these complex biologics. We can’t have that happen. The patent system was put in place to give innovators a wonderful period of time of exclusivity and, at the end of it, if the company isn’t continuing to add significant value to a product, it goes generic. That’s fair. After all, in exchange for getting a patent and holding competition at bay, you also know, from the very beginning, when it will be time to walk away from a product once the patent expires. In the meantime, companies should be using their cash flow to drive innovation to replace the older products rather than spending money to litigate with the intent to secure a perpetual franchise. 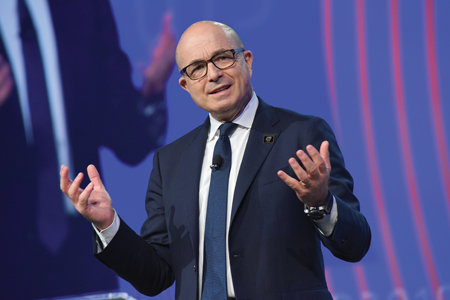 "The concept of protecting an old biological asset by multiple incremental patents is not the way to stimulate innovation."

2. HOW CAN THE BIOSIMILAR PATENT-THICKET CONUNDRUM BE ADDRESSED?

We know one way to spur biopharmaceutical innovation is to guarantee the innovator gets a consistent revenue stream from a product it has developed which has been approved by the FDA. How do you assure a biologic drug development company that it’s not going to lose everything? This is a complex question, and no one has the answer. But at its core, companies need to decide that they want to do it and seek creative ideas and methodologies. For example, imagine if you offered a biologic developer, in exchange for guaranteed licensing of their cells and processes to any number of generic companies at the end of day “X” after some years of exclusivity, that they’d provide a perpetual license to all their processes and cell lines to those biosimilar manufacturers for a royalty stream in exchange. The original developer would be able to walk away from the original branded product that is now generic and still be guaranteed a royalty-based revenue stream.

To me, if regulators and industry were brave enough to work on constructs like this, it would help solve this patent-thicket problem. Further, you wouldn’t have biosimilar companies developing poor-quality products because they’d be using the exact same cell lines and processes, and the new biosimilar product would be identical to the originator. And that benefits the patients. Unless we resolve current practices with all parties at the table and understand the needs of all stakeholders — most importantly patients — it’s going to be very tough to implement. A company that is failing to innovate, but has a blockbuster that is bringing in billions in revenue, is going to fight to the death to protect what they have, despite what is important for patients and the economy.

3. WHAT ARE YOUR PRIORITIES AS BIO’S INCOMING CHAIR?

Most important is setting the appropriate tone regarding BIO and our industry’s culture. The culture needs to be underpinned by the fact that as an industry we have a covenant with the patient and a compact with society. The covenant works like this. Every time a company within our industry makes a decision, it has to be done with the patient in mind — every time. Coupled with that, you have to encourage policies that directly relate to that covenant and compact. Take capital formation, for example. How can we improve on better capital formation for smaller companies to get them to be able to take risk? We need incentives that drive biopharmaceutical drug developers to go after really novel products. This means you have to work with the innovator and the FDA so that when those products get to the FDA, they’ll have their best chance for approval. Regarding the compact with society, we should be asking ourselves how we are going to develop great medicines that the patient can access. How are patients/payors going to pay for them? Patient out-of-pocket expenses are something we must pay particularly close attention to.

The opioid overdose epidemic is another area of importance. I got involved in trying to do something about this national catastrophe. We need a group of biopharma CEOs to tackle all aspects of this crisis, including addiction. They need to go see the problem on the ground.

BIO has put in place three key objectives focused on the opioid crisis. The first was enabling additional capital to go to the NIH to fund non-opioid research to better understand pain. Another was looking at how we get drugs to the right people at the right time. Third was working with the FDA to think through ways of modifying a clinical trial structure so you don’t have to have a pain medicine in development requiring an opioid as a comparator. With this approach, we were able to pass through an important bipartisan bill that has already been signed by President Trump.

I also intend to make sure BIO stays focused on improving leadership diversity in the industry. I let my actions lead. Take note of the boards I sit on (i.e., Biocon and Lundbeck), with both having women CEOs.

Finally, BIO will take an active role in supporting the emerging flood of companies focused on rare diseases. Rare diseases is not just an incredibly active area of innovation; it is also going to provide many new therapies, and it is going to teach us about many other disorders.