In February 2019, the French immuno-oncology diagnostics company HalioDx opened its first laboratory in North America. The five-year-old company, a Qiagen spin-off, selected Richmond, VA, as the location of the lab, in part, because the state’s capital city is only a two-hour drive from the FDA’s headquarters in Maryland.

In addition to that proximity to the FDA, the advantages of a Virginia location for HalioDx and the 1,900 life sciences companies in the state also include a low corporate tax rate and relatively low housing costs, says Jeffrey Gallagher, CEO, Virginia Biotechnology Association (VA BIO). Gallagher is the former VP and general counsel at Lyotropic Therapeutics in Ashland, VA.

“Richmond is two hours from the beach, two hours from the mountains, and two hours from Washington, D. C.,” says Carrie Roth, president and CEO of the nonprofit Activation Capital, which connects Richmond entrepreneurs with resources needed to grow life sciences and advanced technology companies. The firm has a number of ways it supports the growth of the biopharma industry in this region, including having the ability to issue bonds, create joint ventures, and invest in companies.

Roth also heads the 34-acre VA Bio+Tech Park, a life sciences and technology hub and incubator adjacent to Virginia Commonwealth University’s (VCU) medical campus in Richmond. The state financed the construction of VA Bio+Tech, which is home to HalioDx and 27 other bioscience companies as well as 40 research institutes and other health-related organizations.

Virginia’s leaders regard the life sciences industry as a key economic driver for the commonwealth. As a result, the state incentivizes emerging bioscience companies through R&D tax credits, tax capital gains exclusions for investors, and angel investor tax credits. In addition to tax breaks, life sciences companies can obtain research funding from the state.

To help fuel the growth of its life sciences industry, Virginia also has been increasing its investment in academic biomedical research, especially translational science. In 2007, the state helped provide the $90 million required to create Virginia Tech Carilion (VTC) in Roanoke. VTC includes a medical school and a translational science institute, which was recently renamed the Fralin Biomedical Research Institute. Funding for VTC also was provided by Virginia Tech (VT) in Blacksburg and Carilion Clinic in Roanoke.

Thus far, six startups have been launched by institute researchers. “A critical component of the Fralin Biomedical Research Institute’s program is to foster translation, commercialization, and economic development based on the discoveries made at the institute, and that includes nurturing the spin-off of new companies,” says Michael Friedlander, Ph.D., the institute’s executive director and VP for health sciences and technology at VT.

Virginia’s life sciences industry experienced a growth spurt during 2001 to 2008, when the number of companies increased by 55 percent, while private-sector growth statewide grew by 18 percent. During 2014 to 2016, Virginia’s bioscience industry expanded by 15.5 percent, according to BIO. (Data for 2016 to 2018 is not yet available.) The numbers of biopharmaceutical companies and medical device and equipment companies increased by 37 and 31 percent respectively during 2014 to 2016. “The life sciences industry is on the uptick in Virginia,” says Gallagher.

The concentrations are near the University of Virginia in Charlottesville (UVA), VT in Blacksburg and Roanoke, Eastern Virginia Medical School (EVMS) in Norfolk, George Mason University (GMU) in Fairfax and Manassas, as well as VCU in Richmond. The following are examples of Virginia’s bioscience companies in each cluster.

RICHMOND: HOME TO MEDICINES FOR ALL

The Medicines for All Institute, WynnVision, BrainBox Solutions, and Immunarray are among the 28 life sciences companies at VA Bio+Tech.

Medicines for All, funded by grants totaling $40 million from the Bill and Melinda Gates Foundation, is developing pharmaceutical manufacturing processes to lower prescription medicine costs. The institute was founded in 2014 by Frank Gupton, Ph.D., former head of chemical engineering and manufacturing in North America for Boehringer Ingelheim. Gupton, the institute’s scientific director, is professor and chair of chemical and life science engineering at VCU.

WynnVision focuses on the prevention of catheter- associated infections. BrainBox Solutions is designing a multimodality system for diagnosing and treating mild traumatic brain injury. BrainBox, which has VC funding, is a spin-off of Immunarray, which develops molecular biomarker tests. 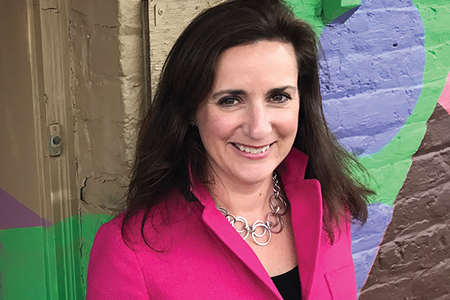 "We’re completely out of lab space. So we’re in the early stages of planning the next building at VA Bio+Tech Park. "

Several bioscience companies have left VA Bio+Tech for larger spaces in Richmond. More than 400 life sciences companies are located in the region. They include Kaléo Pharma, which has designed and commercialized two auto-injectors, one with epinephrine to treat life-threatening allergic reactions, and the other with naloxone to temporarily reverse the effects of opioid overdose.

BioTherapeutics, which uses computational modeling and informatics to design therapeutics against inflammatory bowel disease, is one of three Blacksburg bioscience companies founded by Josep Bassaganya- Riera, Ph.D., director of the VT Biocomplexity Institute’s Nutritional Immunology and Molecular Medicine Laboratory. Bassaganya-Riera has raised over $65 million in nondilutive, equity financing rounds to support the companies.

Continuum Biosciences is developing therapies based on self-limiting, uncoupling proteins that are highly specific to mitochondria, the cell’s power generator. The research could lead to therapies against obesity, diabetes, and liver diseases.

Techulon is using its proprietary peptide-peptide nucleic acid technology to develop nanotherapeutic drugs against MRSA and other tough-to-treat bacterial strains.

Ceres Nanosciences, Orpheus Bioscience, and Serpin Pharma are among the bioscience companies in the Prince William Science Accelerator in Northern Virginia. The accelerator, which has the only commercially available wet lab space in Northern Virginia, is part of Innovation Park, anchored by GMU’s science and technology campus.

Ceres Nanosciences has designed a point-of-care diagnostic test for Lyme disease that has received the FDA’s Breakthrough Device Designation. Orpheus Bioscience is developing therapeutics to combat autoimmune disease without suppressing the entire immune system. Serpin Pharma is designing a new class of peptide drugs against autoimmune, inflammatory, and infectious diseases.

Also based in Northern Virginia is Inova Health System, which has joined forces with UVA to create a 117- acre life science ecosystem in Fairfax. The state and UVA each provided $28 million, and Inova contributed $56 million to construct the new campus, which will include a new school of medicine and an expansion of the current Inova Center for Personalized Health (ICPH).

ICPH’s business accelerator provides early-stage funding and mentoring to health technology startups such as Cyrano Therapeutics, which is developing a nasal spray to restore and maintain the sense of smell and its connection with the ability to detect flavor in food.

HemoShear Therapeutics has an exclusive drug discovery partnership with Japan’s Takeda Pharmaceutical Company that is based on the Charlottesville company’s proprietary models that recreate human liver diseases. HemoShear has received up-front payments and R&D funding and is eligible for milestone payments totaling $470 million from Takeda.

Cavion is developing therapies for essential tremor and epilepsy and a biomarker assay for an investigational drug against glioblastoma. In 2017, the clinical-stage company received over $26 million in series A funds, led by Lilly Ventures and the Novartis Venture Fund. In 2017, Diffusion Pharmaceuticals, which like Cavion is publicly listed, raised $25 million in series A funds to support development of its novel approach for combatting cancers by eliminating oxygen deprivation in tissues.

FOR VC FUNDING, GO OUTSIDE VA

The $25 million raised by Diffusion Pharmaceuticals came from Charlottesille investors, says Martin Chapman, Ph.D., chair and cofounder of CvilleBioHub. “Charlottesville has a very active community of angel investors,” says Chapman, also president and CEO of Indoor Biotechnologies in Charlottesville. In 2017, the Angel Resource Institute named the Charlottesville Angel Network one of the most active early-stage investment groups in the U.S.

Throughout Virginia there are many seed and angel investors interested in life sciences. To obtain VC funding, Virginia companies usually go to Boston, New York, or San Francisco. However, “VCs are paying more attention to Virginia’s bioscience companies. Several Vcs have begun to regularly visit the state,” explains Gallagher.

“In my opinion, what’s missing is scalable risk capital on the ground,” says Sirinakis, a VA BIO board member. “Having a local ‘lead’ in an emerging ecosystem can often catalyze other Vcs to either syndicate with them or follow them into companies that have been de-risked. In turn, as these companies become successful, it’s easier to recruit talented C-level leaders, which then creates more successful companies. Ultimately success breeds success, and Vcs outside the region will more easily be attracted and look at opportunities here.”

Because of Virginia’s lack of life sciences-focused Vcs, several universities have created their own VC and seed funds. In 2017, VT and Carilion Clinic launched a $15 million fund that invests in early-stage life sciences and technology companies. The first recipient was Charlottesville- based TearSolutions, which plans to use the funds to sponsor a Phase 1/2 clinical trial of its first-in-class topical treatment for dry eye disease.

In early 2019, VCU launched a three-year, $7 million initiative to support the development of new healthcare innovations. The initiative will allow “students or faculty who have an idea to innovate healthcare to move seamlessly from concept to commercial viability to mature startup,” says VCU President Michael Rao, Ph.D.

Lack of VC financing is not the only challenge to the growth of Virginia’s life sciences sector. “We’re completely out of lab space,” Roth says. “So we’re in the early stages of planning the next building at VA Bio+Tech Park.” The building will provide step-up space for companies that have advanced beyond the incubation stage of their development.

CvilleBioHub is documenting local companies’ lab space needs. The results will be used to encourage developers to design and construct R&D facilities in the area.