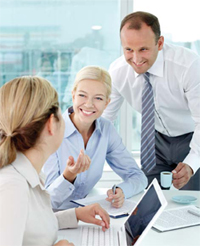 In May 2011 Johnson & Johnson executives sat down to figure out how to tackle a growing problem — inefficient clinical trials. Improved internal processes and new technologies were at the top of the agenda, but it quickly became apparent these measures were insufficient. In fact, J&J executives realized that any action they took alone would be insufficient to address some problems. To design the clinical trial processes of the future they would have to look outside their walls. Collaboration was needed.

Andreas Koester, MD, Ph.D., was at the J&J meeting. “We identified very quickly that some of the things that make clinical trials inefficient today can only be tackled when we work in concert with other companies,” recalls Koester, head of clinical trial innovation and external alliances at Janssen Research & Development. Many others have reached the same conclusion, but putting those simple words into action is tough. Most Big Pharma firms have tried to do it by forming precompetitive collaborations with rivals and academia. But it is tough for two companies to even agree on what information is precompetitive. Successful precompetitive collaborations only occur when multiple companies put aside traditional rivalries and adopt new ways of thinking about drug development and their respective roles within the industry. It is a big challenge.

Koester and his colleagues have managed it, though. Janssen’s parent company, J&J, is now sharing investigator training information with Eli Lilly and Merck. And Koester went from discussing the idea internally to presenting the initiative to the world within 18 months. How? “We focused on what you could call ‘lowhanging fruit,’” he explains. By targeting easily achievable, uncontroversial goals — the ‘low-hanging fruit’ — Koester hoped to quickly advance the project. But in an industry resistant to change, even ‘low-hanging fruit’ can be difficult to pluck.

How To Get Collaborators On Board Quickly
To understand how to make a precompetitive collaboration work, Koester looked at what had failed in the past. He soon found a common theme. Many of the projects that stalled had over-reached, either in scope or scale. The J&J team was determined to avoid these traps and worked on a concept they could push through quickly. This involved anticipating potential bottlenecks, the first and most fundamental of which was opposition to sharing information. To sidestep this early potential obstacle, J&J looked at sharing “items and data that are really noncontroversial; everybody can easily say, ‘Yeah, that makes total sense,’” Koester explains. For example, trial investigator good clinical practice (GCP) training information fit the criteria. It would be hard to argue that keeping these records confidential offers any competitive advantage. And there is a clear case that such secrecy is detrimental to the industry as a whole. It is among the lowest of the low-hanging fruit referred to by Koester. Currently, investigators undergo basically the same training each time they begin working with a new company. So, if investigators work with five companies, they will have to do five separate training sessions. This duplicated workload is often cited as a reason why more than half of investigators drop out after running just a few clinical trials. “They are inundated with red tape and administrative burdens, just because we don’t share what is really generic information that should only be captured once,” Koester says. As well as duplicated GCP training programs, clinical investigators must undergo repeated therapeutic area education sessions and face administrative burdens associated with institutional review board meetings. If these burdens distract too much from treating patients, a physician is likely to stop running clinical trials.

Having formulated an initial plan, Koester and his colleagues got in touch with their contacts at other Big Pharma companies. “The response was very enthusiastic. But of course it can take time for an enthusiastic response to become a firm commitment,” Koester recalls. Persistence and patience are needed to bring people on board with such a project. Merck and Lilly were at the head of the queue, and J&J selected them as its two partners. J&J could have waited for more partners to sign up, but Koester says that was never the plan. The decision to restrict initial membership was made after looking into the travails of earlier collaborations. Koester saw that initiatives with more members tend to become bogged down by an inability to make decisions. “You can only move forward once you have consensus, and consensus is naturally easier to get with three players than with 5, 10, or 20,” he says. Once inertia sets in, it is tough to regain the early momentum and optimism. With more voices involved, every potential stumbling block and bottleneck, from agreeing on a central data warehouse to the drafting of privacy agreements, would have taken longer to navigate. The risk of delays is particularly pronounced for a project, such as the database, that is well outside the comfort zone of the industry. Sharing information is, for many good reasons, unnatural to pharma as an industry, and getting the green light from internal departments can be more challenging than finding common ground with external partners. A lot of determination is needed to overcome such internal resistance and drive through disruptive innovation projects.

Having played a central role in multiple partnerships, Eli Lilly’s Jeffrey Kasher knows more than most about what it takes to make a precompetitive alliance work. Kasher, Lilly’s VP of clinical trial transformation, is an advocate of precompetitive partnerships but admits they present “unique challenges.” These challenges meant that the investigator database remained a nice, but seemingly unworkable, idea for years. The concept became a reality only when a few “committed partners who were willing to take the much needed first step” got together, Kasher explains.

What J&J Is Doing To Expand The Database
The end result has made the effort worthwhile, though. J&J talked to investigators throughout the development of the project and found overwhelming support. Some asked Koester, “Why have you not done this 5 or 10 years ago? That’s what we were waiting for,” he recalls. Yet, in its current form, the database has limited benefits for investigators. The shortcomings stem from the deliberately narrow scope of the project. Investigators who sign up to share their data will avoid duplicated training by the three partners but still have to jump through hoops for the rest of the drug industry. Repeated GCP training will still weigh heavily on their business.

J&J foresaw these shortcomings but decided to sacrifice comprehensiveness for speed. With 10 voices vying for attention, it is highly unlikely J&J could have got the database going so quickly. Yet, while the project could only come into being by starting small, it could only fulfill its potential by thinking big. “It becomes really valuable to the investigators only once all major pharma companies — and in the future smaller and biotech companies — share their data,” Koester says. In working toward the ambitious goal of getting all companies to sign up to the project, J&J has broken the task down into manageable steps.

The first step is getting the remaining eight members of the Big Pharma consortium, TransCelerate, on board. Talks are already underway, and for companies looking to join now, the risk-reward proposition is clearer. J&J, Lilly, and Merck have already cleared out the stumbling blocks involved in setting up the project, and data on its benefits should start coming in soon. “Our thinking was that once we set up the database and showed its benefits, it would be much easier for other companies to join,” Koester explains. To further simplify the process for new sign ups, TransCelerate members automatically qualify for participation. TransCelerate will formalize its support for the initiative next year when it makes the investigator database one of its priority projects.

What Information Is Precompetitive?
As J&J planned from the start, few if any companies are likely to have strong objections to sharing investigator GCP training records. But with this project now well underway, Koester and his collaborators are becoming more ambitious. “The discussion ‘what is precompetitive?’ can be expanded. There may be other data fields in the future we may want to include,” Koester says. Other training records, such as those related to specific therapeutic areas, could be next. For example, it is questionable whether investigators need multiple companies to train them on how to limit placebo response in CNS studies. Sharing these training records could reduce duplicated effort.

Opening peoples’ eyes to the benefits of collaborating through an uncontroversial proposition improves the chances of gaining acceptance for more radical ideas. How radical remains to be seen. To illustrate the breadth of views on what can be classified as precompetitive, Koester notes that some people are calling for companies to share all information on a drug target until it is validated. It would take a major re-imagining of the pharma industry to reach this stage, but clearly there is a lot of scope for expanding precompetitive collaboration. More importantly, the pressures on drug development mean there is now an increased willingness from the industry’s biggest players to consider new ways of working.

In the past year Lilly alone has formed several collaborations, with the investigator database and TransCelerate coming months after it allied with the NIH. Each partnership is an acknowledgement that it is no longer viable to operate in isolation. Many of the current drug discovery and development challenges are simply too big for any one company. “It is important that those involved in the drug discovery and development ecosystem complement and not compete against each other. Ultimately, we believe we can create value for patients and clinicians through improved transparency and ease of use, and by engaging all to contribute to the drug development process,” Kasher says.