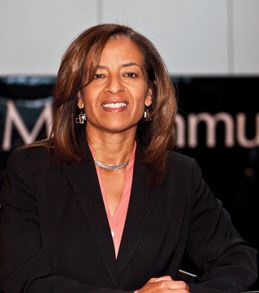 When I sat down with Bahija Jallal at this year’s Bio International Conference in Chicago, the new leader of MedImmune surprised me with her sense of humor. I was telling her about my fondness for unique names and inquired as to the country of origin of “Bahija.” In a deadpan reply that even Carol Burnett would have been proud of, she stated, “It’s Swedish.” Laughing — because I actually bought it — Jallal went on to explain that she grew up in Morocco before studying in France and Germany and working on both the West and East Coasts of the United States. I quickly learned that Jallal thrives on change, something she experienced relatively quickly after joining MedImmune in 2006 as the VP of translational sciences.

Just one year into her position at the Maryland-based biotech, the company was acquired by AstraZeneca (AZ) for a whopping $15.6 billion. Under her watch, Jallal guided MedImmune’s R&D biologics pipeline from 40 drugs to 140+. That track record didn’t go unnoticed by AZ’s newly appoint

ed CEO, Pascal Soriot. In what some described as a management shake-up, Soriot, who joined AZ last August, announced earlier this year that MedImmune would be taking center stage as AZ’s biologics R&D center — elevating Jallal to executive VP (the top position at the company, a position previously held by Peter Greenleaf). According to Jallal, the move is designed to more fully integrate MedImmune into AZ, with the former commercial and manufacturing operations being folded into the parent company instead of operating as a subsidiary. “What changed,” says Jallal, “is I now report directly to the CEO of AZ, elevating the biologics business to the executive suite.” The move makes sense when you consider MedImmune’s biologic pipeline has gone from 5% to half of AZ’s current portfolio. If biologics are taking on a more prominent role within your organization, Jallal has some insights on how to successfully focus your biologics R&D operation so as to encourage, not kill, the entrepreneurial spirit on which it was built.

The Benefit Of Consolidating Early- And Late-Stage Development
In the real estate industry, the three most important things to buying or selling a piece of property are — location, location, and finally location. The same principle applies when building a productive biologics R&D organization. For AZ, the decision to focus its biologics drug development business in Gaithersburg (the fourth largest city in Maryland) may seem odd when the most well-known biotech hubs in the United States are in California and the greater Boston area. “When planning where you want to be, you really need to plan for the long term,” she states. “Sure, having close access to talent, universities, and other biotechnology companies are key components to a company’s innovation ecosystem, but there are other things to consider as well.” Being in Gaithersburg places MedImmune within close proximity to universities such as Johns Hopkins and approximately 131 other biotechs. It also places it within 15 minutes of Bethesda, MD, home to the main campus of the NIH and the Walter Reed National Military Medical Center. This location also is within 20 miles of the FDA and 30 miles from the nation’s capital. But the decision to centralize in Gaithersburg had other advantages as well.

Prior to this move, MedImmune’s early-stage research was conducted in Gaithersburg and late-stage research was conducted in Wilmington, DE. Though only a two-hour commute between the two cities (on a good day), Jallal believes that keeping the two processes separate was not an effective structure. “In the next two years, there are several projects moving into later stages,” she asserts. “When you have people located geographically apart, knowledge transfer is inhibited when progressing a candidate through the various stages of development.” By having late-stage development integrated to where the biologic initially evolved, Jallal believes it will make the development progression between stages more seamless, improve productivity, and increase internal collaboration. But along with improved internal collaboration, she wanted to increase external collaboration as well.

Sometimes Less Is More
When AZ acquired MedImmune, it began significantly investing in growing it from a smaller company to where it is today. The result has been a threefold increase in the biologics pipeline. Jallal cautions that such rapid success can sometimes make you complacent. “When you are growing, you cannot take for granted that you can keep that level of innovation going,” she states. “You really have to do something that entices scientists to continue to be innovative.” One of the things MedImmune has done, quite deliberately, is to size the organization a little bit smaller than expected. For example, MedImmune currently has around 2,500 employees globally — a figure that is not much different from when it was acquired in 2007. According to Jallal, this limiting of internal resources forces the MedImmune scientists to collaborate with the outside. “I think that’s the essence of keeping the scientists at the cutting edge of what they do best, which is to innovate and do good science,” she affirms. It is hard to argue with the results. About 40% of the current MedImmune pipeline consists of external collaborations and partnerships, including a joint development and commercialization agreement with Amgen on five monoclonal antibodies from Amgen’s clinical inflammation portfolio, giving MedImmune the most robust inflammation pipeline in the industry. “We don’t have the ‘has-to-be-invented-here’ syndrome that you find in some organizations,” she says. Jallal’s advice on maintaining your company’s entrepreneurial spirit — keep your organization deliberately small as you grow. Another key to creating and maintaining the entrepreneurial spirit within your organization, according to Jallal, is to include the establishment of lofty goals. “For instance, five years ago we said that by 2016 — and at the time we had very few programs in the pipeline — we were going to have one BLA [biologics license application] every year in a sustainable fashion.” She says they then worked backwards from the goal to determine how they could achieve it while keeping science and patients as the focus. Focusing on external collaboration, while having a smaller staff, was one component to achieving the goal. Another was implementing HR policies which emphasized and rewarded publications and patents. “We made this part of the MedImmune career progression path for scientists,” she states. For an example of this, you need to look no further than Jallal herself — author of more than 70 peer-reviewed publications and holding more than 15 patents.

Put Science At The Core And Simplify
When I was concluding our discussion, I asked Jallal for a couple of pearls of wisdom for those readers seeking to grow their biologics business with the same level of success as MedImmune’s. She told me that the core of any strategy has to be about the people and the science. You need to have scientists who thrive on challenges and are passionate about their science, yet rigorous in their decision making. For MedImmune, this means having an effective governance process. For instance, the team has to be willing to walk away from a project when they know it isn’t going to work. “You have to remember that you still work for a business, and you need to strive for balance between the business and the science,” she says. That being said, Jallal firmly believes science must be at the core. “To be able to publish and be open to the outside and collaborate is the way to go,” she affirms, adding that science is something that can only flourish when you are sharing it and having other people think about the same problems.

The move by Pascal Soriot to consolidate AZ’s R&D into three strategic units — U.K., the U.S., and Sweden — has the hefty price of $1.4 billion. Annualized benefits of the overhaul are expected to reach approximately $190 million by 2016. There are other anticipated benefits such as improved productivity and better communication resulting from the reduction of managerial layers. For example, the executive team, which represents the entire R&D engine of the $28 billion, 51,000-employee-member company, is now represented by three people, including Jallal, all of whom report directly to the CEO. Jallal gives credit to Soriot for creating a sensible organizational structure and a simplified strategy. Now, it is up to her to execute on the vision for MedImmune to continue to serve as a blueprint for how to build a biologics R&D engine at a Big Pharma company.

Credibility Is Key To Communication

In her leadership role as executive VP of MedImmune, Bahija Jallal is responsible for biologics R&D and clinical activities. She believes being a scientist at the top of a scientifically driven organization brings credibility. “In any tough decision that you’re going to make, you need to have credibility that you are still associated with the science,” she affirms. “I think one of the mistakes we make is when we move from the bench into a leadership role, we tend to take the approach of becoming a manager of scientists. That’s not the right way to look at it. As a leader, you have to keep on the cutting edge so that when you make decisions, you are actually explaining why, from a business point of view, which is grounded in scientific understanding.” For Jallal, that means working on one “pet project” each year that keeps her hands in the science, in addition to reading scientific literature and publishing papers.

According to Jallal, one of the key things she learned early in her career is the importance of communication. “There is power in being able to explain the entire ‘food chain’ from a business and scientific perspective,” she states. “It brings the understanding of why we’re developing whatever we’re developing, why we have to make decisions, and why we have to make trade-offs.” Jallal believes people are very reasonable when things are well-explained and they understand the why behind a decision. “One of the worst things you can do is to assume that just because a decision in your mind makes complete sense, you don’t need to take the time to communicate and explain it to people. If you do that, you won’t get buy-in.” Her advice is to keep your science sharp, as it not only gives you credibility, but helps with communication. “That’s a really big lesson that I learned,” she confides. “When you communicate more about why you’re making a decision, it creates buy-in, bringing people with you much more so than just sending a memo saying, ‘This is what we decided.’”

Featured Event:
Webinar - The Cost of Failure In Pharma Development:  A Risk for Everyone