Continuous improvement doesn’t just depend upon Lean principles and/or zero-based budgeting. It depends upon people inspired by a culture that values learning, promotes problem-solving skills, and strives toward big goals by making small improvements every day.

Every outcome can be obtained through a process and, hence, improved,” says Craig Kennedy, senior VP of supply chain management at Merck. “And once it starts, it never stops.” 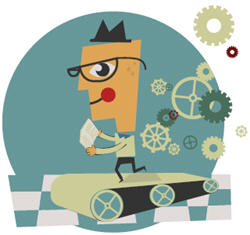 With Lean, Six Sigma, Kaizen, Agile, total quality management, and other process improvement approaches, after an initial surge, results sometimes slipped backwards to baseline levels. That’s because, like most companies, Merck focused on costs, outcomes, and big goals. Once the desired results were achieved, the company turned to other projects. “That approach was not focused on the human capability to make continuous improvement part of the culture,” Kennedy says. “Unless you do this, methods ultimately will fail and even slip backwards.”

One part of the problem, Kennedy elaborates, was that “we tried to improve unstable processes. We focused on Lean as a promise to gain efficiency and achieve results significantly different than we had at the time.” The steps to ensure continuous improvement — scientific problem solving, coaching, leader involvement, and daily application — weren’t fully addressed.

START WITH A CHALLENGE
One of Merck’s continuous improvement challenges was to improve its line-item fill rate for its top products. As Kennedy says, “We set a very high standard for line-item fill rate. To be considered a success, each line item must be filled exactly with the quantity the customer requested and be delivered exactly when the customer requested, and this must be verified by the customer. We were filling tens of thousands of items that were shipped to 200 markets each month with high schedule adherence, but it wasn’t translating to high service in the eyes of the customer. Therefore, with stability as a first goal, we focused on deliberate improvements. We worked through one variable at a time, adjusting through experiments and learning along the way. Each effort was guided by a clear sense of purpose and challenge,” Kennedy says.

For example, in his previous role as a plant manager, “Our overall goal, which we achieved, was to produce 1.4 million vials per week, 95 percent of the time.” Initially, Kennedy recalls, fill rates fluctuated from about 700 vials to 1.2 million vials per week on any given line. He slowed the lines until each produced a consistent number of vials each week and could maintain that consistency for about a month. Once the first goal was achieved and maintained, the goal increased, and any issues that could prevent reaching that goal were addressed. By the end of the year, each line had met the goal of filling 1.4 million vials per week, and the issues that had prevented filling so many vials consistently in the past had been resolved.

Continuous improvements can be made in other areas, too. For example, Merck has a high level of customer service because it addressed its ability to fill orders on time and in full. “A systematic program of continuous improvement addressed issues and improved our customer service scores by more than 10 percent in one year. For the past nine months, 95 percent of orders, globally, are filled on time and in full, as verified by the customer,” Kennedy says. At the same time, costs were reduced.

This approach works throughout organizations because, regardless of the area targeted for improvement, the basic questions are the same: “What are you trying to achieve? Where are you now? What’s preventing you from getting the results you want? What did you try last, and what did you learn? What are you trying next, and what do you expect to happen? When can we see results?”

Importantly, Kennedy cautions that not every experiment will work. “Success requires a strong focus on scientific methods. People are expected to hypothesize, design a test, and run the experiment. Continuous improvement occurs in an environment in which people practice, fail, learn from their mistakes, and try again. It occurs by making incremental, small steps in a routine, regular fashion.”

LEADER-DRIVEN
Lasting improvements must be driven by leaders. At Merck, senior leadership sets a challenging, but ultimately reachable, long-term vision. To achieve it, the company develops smaller goals with clearly identified steps that connect to that vision. Because these goals are smaller and nearer- term, the vision becomes achievable. The primary goals are not only to make an improvement but also to obtain the learning that accompanies the efforts, thereby building from previous attempts.

The situation can be compared to the space program in the 1960s. The program that began with the launch of a small satellite spurred the nation’s leaders to envision the landing of a man on the moon by the end of the decade. NASA approached the challenge scientifically, one step at a time. First, launching a man into space, extending human time spent in space, and learning to maneuver the space capsule, before leaving Earth’s orbit and, in 1969, landing men on the moon.

In the pharmaceutical industry, the vision may be a bit more earth-bound but nonetheless challenging. One goal, for example, may be to achieve single-piece flow on customer demand. As Kennedy explains it, “Patients and customers don’t buy batches at one time; they buy doses or courses of treatment.” Sometimes their personal situations or economics require that they buy single courses of treatment or even a few doses at once, excluding them from purchasing the larger quantities the industry more often provides.

In addition to better serving small markets, enabling single-piece flow helps expose problems in the process flow. Supply chains that are capable of providing single units tend to be more efficient than those that can only supply larger quantities, he says. The benefits, which include limited inventory, fresher ingredients, and longer effective shelf life at the end-user level, are comparable to those of just-in-time delivery.

The connecting challenge in this scenario is to scale down batch size to a one-month supply, and then a one-week supply, and eventually a single dose.

SCIENTIFIC PROBLEM-SOLVING SKILLS
To achieve continuous improvement, leaders must do more than provide a vision and issue a connecting challenge. They also must actively implement the needed changes and ensure those changes actually are made. “They can’t merely announce a change, confirm that their people are trained, and assume the change will happen,” Kennedy says. “They must not delegate their authority.”

Ideally, “leaders will set challenges so people stretch, learn, and improve. A challenge too far above current capabilities may be demotivating, but I have found that people are extremely motivated when they have a good purpose and a definite challenge.”

THE LEARNING IS AS IMPORTANT AS THE OUTCOME
Developing problem-solving skills and a continuous improvement mindset requires coaching. Management throughout the organization is responsible for coaching.

“Skills are different from knowledge,” Kennedy points out. Training can provide skills, but it needs to be augmented by practice for it to become most valuable. Training also must be directed toward the company’s goals. Aligning learning with organizational goals is key, because improvements don’t arise from learning for learning’s sake.

To help ensure alignment between training and organization objectives, “We record the learning and coaching sessions and measure subsequent activities.” For example, rather than merely recording that a manager and employee met for a coaching session, Merck measures whether their learning is progressing, using a skills matrix divided into novice, intermediate, and expert categories. The goal is for employees to progress to the point they can teach each skill within their matrix.

Plateaus in progress are normal, Kennedy points out. “Managers need to recognize when learning has stopped and set a different challenge to help employees learn in a different direction. The manager’s job is to send them back when necessary to relearn elements. Learning occurs by doing.

“People, in general, like to learn and to solve problems. Continuous improvement really means investing in people.”

By directing the energy of people in ways that make continual, incremental improvements, companies can increase productivity and build more engaging environments. “I’ve never seen a piece of equipment improve itself,” he points out.

Since Merck’s commitment to continuous improvement some four years ago, the benefits have rippled throughout the company. The line-item fill rate has increased from 82 to 97.5 percent. Inventory has been reduced 10 percent by shortening lead times for business, financial, and physical processes. Merck’s product flow and velocity have increased in four key supply chains, which led to double-digit growth in emerging markets each year. Even employee engagement has improved 15 percent. “Most importantly,” Kennedy says, “we’ve built a measurable skills base in scientific problem solving that is being deployed and improved daily.”

Achieving continuous improvement doesn’t happen overnight, Kennedy stresses. Committing to a process of continuous improvement requires a mindset that is focused on excellence and efficiency and that refuses to accept the status quo. To gain the benefits, organizations and individuals must actively try to improve. As Kennedy says, “Companies build cultures over a long time, formed by rigorous adherence to the same thing, again and again.”