Freewheeling engagement with the public is not the first thing that comes to mind when considering the pharmaceutical industry. But that’s what is happening more and more as drugmakers set up social media sites that allow patients to interact with company experts and the broader community about health problems and potential solutions. 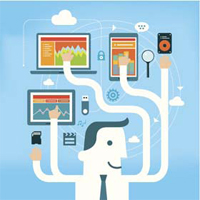 Social media has become the place to go for patients to find information and share views with others, says Murray Aitken, executive director of the IMS Institute for Health Informatics. “Pharma companies who are ‘patient-centric’ recognize the critical role that social media plays in healthcare and the importance of engaging with patients through those media outlets,” he adds.

Taking the social media plunge, however, hasn’t come quickly for an industry in which one wrong statement or omitted fact can draw the FDA’s ire. At the end of 2013, just half of the 50 largest drugmakers were using social media to communicate with patients and consumers about health issues, according to a January 2014 study from IMS Institute for Health Informatics. Today usage continues to increase as companies become more comfortable with the regulatory framework for online activities and recognize the growing role that patients play in their own healthcare, especially as high-deductible plans bring more visibility to the cost of care.

DRUGMAKERS ESTABLISH RULES TO AVOID MARKETING VIOLATIONS
Some companies have jumped in with gusto. Take drug giant Pfizer, which has a strong presence on the major channels of Facebook, Twitter, and YouTube, as well as others. One of Pfizer’s Facebook pages is called “Meet Meningitis,” which describes itself as “your source for information about meningococcal disease.” The page, which launched in November 2014, has nearly 8,000 likes and includes a wide variety of posts, videos, information, advice, and personal stories of survivors. A December 2014 post detailing statistics of meningococcal disease had been shared more than 2,810 times as of early February and generated nearly 500 comments, many telling harrowing tales of their own experiences with the disease.

But the discussion, as robust as it is, is not without parameters.

Pfizer includes a prominent section on the site that explains why the company sometimes has to pull comments from the wall. The top reason is a comment referencing a product, either Pfizer’s or someone else’s. “While we do not endorse any users’ comments, we still have to be mindful of the important regulations that govern our industry,” Pfizer says. “If your post references a pharmaceutical brand from any company — positive or negative — we will need to remove it because, among other reasons, we can’t guarantee that it will represent Fair Balance.” Other posts that get the chop include those that reference a side effect of a drug, offer medical advice, are off topic, or are simply vulgar.

HANDLING NEGATIVE COMMENTS
Indeed, it is not uncommon for consumer engagement to appear out-of-bounds on social media. A recent consumer posting on Pfizer’s Twitter feed, for example, claimed that one of the company’s drugs had turned him into a rapist. Pfizer’s prompt response was to direct the consumer to the company’s adverse-events reporting site. Such an exchange underscores a significant pitfall of the medium. “You can’t control the user-generated content,” says Jeffrey Wasserstein, a director at law firm Hyman, Phelps & McNamara, and an expert in pharmaceutical promotions. The FDA has issued guidance that basically says a company is not held responsible for user-generated content, he explains. But companies still worry about the person who talks about taking a drug and relaying all of the adverse events that started happening. You are limited in how you can respond, he explains. “Short of saying, ‘We’re very sorry that you had this experience; please call our drug-safety department for followup,’ you can’t really say very much.”

"You have to be careful because your messaging is being put out there to a much broader audience than you typically see for a promotional piece."

Still, negative comments about a drug on a pharma social media site may have less bite than do negative reviews for other consumer goods. Patients are savvier and recognize that individual experiences will vary on a drug. Wasserstein notes, “Patients also have their doctors who are discussing things with them and explaining the likelihood of adverse events.” While a bad comment could cause some concern, it’s unlikely to tarnish the reputation of a pharmaceutical company.

FDA TO PROVIDE LONG-AWAITED GUIDANCE
On another front, pharmaceutical companies also appear to be avoiding FDA enforcement actions in their use of social media. Last year, the FDA issued only 10 warning letters for promotional violations, down from 24 in 2013 and 50 in 2010. Nevertheless, three of the FDA actions last year were for electronic promotions, including those on Google-sponsored links and Facebook.

Still, Wasserstein says the FDA is focused more on developing social media guidance than trying to announce or clarify rules through enforcement.

The FDA last summer issued long-awaited guidance on using limited space posts, such as the 140 characters on Twitter and Google-sponsored links, for drug promotions. The FDA still requires drugmakers to present a balance of risk and benefit information in these posts, something that is virtually impossible to do to in a short tweet, industry complained. More helpful, the FDA last summer issued guidance that says companies do not have an obligation to correct misinformation created by third parties on their sites.

Drugmakers appear to be avoiding promotional rules in social media altogether by focusing on unbranded disease states, such as the meningitis site. “They’re giving patients a chance to interact and understand that there are options out there, without necessarily saying what the options are,” Wasserstein says. “In other words, they’re trying to increase the pool of participants without necessarily pushing a particular promotional message.”

Such efforts demonstrate that a company is a responsible participant in the community. “You talk to any of the social media gurus, and it’s all about community building, not pushing messages about a drug,” Wasserstein says. “You lose a lot of credibility if that’s what you’re doing.” At the same time, participants understand that in the background there is a drug company and there are solutions without necessarily talking about the drug.

IMS’s Aitken underscores the value pharma companies also get when hearing directly from patients about their healthcare experiences and their views on alternative treatment options, especially if the individuals may benefit from the company’s products. “They are able to capture ‘raw’ comments from patients that are otherwise expensive or difficult to obtain,” he says. “The directness of the communication is unique and removes intermediaries such as payers and providers, though their role is still critical.”

SOCIAL MEDIA CONTINUES GROWTH, ESPECIALLY AMONG OLDER ADULTS
Aitken also points to another driving value factor in pharma’s growing interest in social media: the sheer number and range of sites along with increasing consumer participation. This point is born out in a January 2015 report from the Pew Research Center that finds 71 percent of all U.S. adults last year followed Facebook, up from 67 percent in 2012. Other popular social media sites have much lower penetration rates but have seen membership jump even more. Twitter, for example, had a 23 percent follow rate last year, up from 16 percent in 2012, according to Pew.

Furthermore, online users have been skewing toward people more likely to use drugs. Roughly 56 percent of Internet users ages 65 years and older used Facebook last year, up from 45 percent who did so in late 2013 and just 35 percent who did so in late 2012, according to Pew. This is an exciting space for pharma companies, Aitken says. “Not only because of the way in which social media is used every day by millions of consumers and patients, but also because its growing use is happening at the same time other changes are afoot in our healthcare system.”

Some of those consumer-shifting changes include a move to high-deductible plans, the vast pool of newly insured individuals via the new health insurance exchanges, or Medicaid expansion and the greater focus by payers and providers on patient outcomes and performance of the health system.

WEIGHING THE COSTS AND BENEFITS
But that doesn’t mean drugmakers should jump into social media without a serious cost-benefit analysis. “There are a lot of costs,” Wasserstein says. “You’re going to need personnel dedicated to monitoring. You’re going to need extensive discussions about what kind of messaging you’re going to craft that go well beyond what your traditional promotion review looks like. You have to be careful because your messaging is being put out there to a much broader audience than you typically see for a promotional piece.”

And chatting directly with individuals raises a whole host of concerns, particularly that the company is not overstepping the bounds between a doctor-patient relationship by dispensing medical advice, but rather playing a supportive, adjunctive role, he says. “It’s a very tough balance,” Wasserstein notes. “The companies that have done it have found it very rewarding, but from a regulatory and legal standpoint, you have to be very careful.”