Just days before it was to take effect, the courts halted President Trump’s international reference-pricing scheme, the Most Favored Nation model. On December 28, 2020 a preliminary injunction was granted, blocking implementation of President Trump’s eleventh-hour interim final rule (IFR) meant to slash drug pricing through a nationwide “demonstration program” based on the lowest price in 22 countries of 50 widely used drugs in Medicare.

In bypassing the notice-and-comment rulemaking process, which requires input and consultation of affected stakeholders, the Trump administration had improperly attempted to implement a radical change in Medicare reimbursement policy.

The courts were not buying the government’s weak arguments that the COVID crisis constituted “good cause” for skipping rulemaking as required under the Administrative Procedures Act. If Medicare patients urgently needed cheaper drugs because of the crisis, why wait nine months into the pandemic, and more than two years after the international reference pricing idea was first broached, to issue the regulation?

Administration Dressed Down By Courts

Judge Vince Chhabria chastised the Trump administration: “It seems obvious — based on both common sense and the way the interim final rule is written — that the reasons the government offers for dispensing with the notice-and-comment requirements are contrived.”

He continued, “The real reason is that the current presidential administration is in its waning days and would not have time to enact the policy if it adhered to these requirements. While there’s nothing unlawful per se about rushing to enact policy in the final days of a presidential administration (indeed, it’s a time-honored tradition), executive branch officials may not circumvent clear legal requirements in the eleventh hour to achieve goals they couldn’t accomplish in the
normal course.”

The relief was not at all preordained, as the legal standard for issuing a preliminary injunction is quite high. Prior to the ruling, physician practices set to take the brunt of the reimbursement cuts were already canceling treatment regimens and moving patients to less-costly (and less effective) drugs that were not impacted by the reimbursement cuts. But the injunction has the impact of retaining current reimbursement policy of average sales price plus 6% until the Biden administration can decide whether and how to proceed.

Tom Barker, former Health and Human Services General Counsel, and currently, a partner at Foley Hoag, commented, “Interested parties should still comment on the Interim Final Rule, even though it has been vacated by at least one court. The incoming Biden administration could finalize the rulemaking process, withdraw the rule, or issue a new rule. Although CMS has said that it would not implement the rule on January 1, it is only temporarily enjoined; no court has ruled on the legality of the IFR.”

The industry is not out of the woods, but it has bought itself time to mobilize allies in the physician and patient advocacy communities to try to convince a new administration it hopes is more focused on solving the COVID crisis than perceived international pricing disparities that became a fixation for President Trump.

The Biden transition team has not commented specifically on the Trump proposal or the litigation but has been generally supportive of leveling international price disparities. Biden endorsed the Democratic House-passed legislation, which would cap drug prices based on an index of six countries, and empower the Secretary of HHS to negotiate for further discounts. 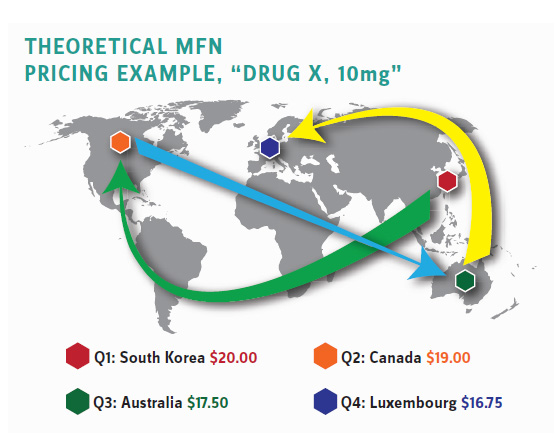 The Chaos of MFN Will Be Hard to Predict

But, at least, that proposal does not have the volatility, uncertainty, and sheer chaos that the Trump most favored nation (i.e., cheapest nation) policy would impose on hospitals, physician practices, and infusion centers administering Part B drugs. The price controls would apply to those healthcare providers who would see their reimbursements fluctuate from quarter to quarter based on peculiar and changing circumstances in 22 countries across four continents. (See illustrative example.)

These healthcare providers would be in a constant scramble to attempt to acquire complex and expensive pharmaceutical products with no way to predict whether a price cut in countries such as New Zealand, South Korea, Norway, and Israel would determine their Medicare reimbursement a couple of weeks later. They’d likely often be behind the eight ball where the acquisition cost for their inventory far exceeded their Medicare reimbursements.

Independent physician practices and infusion centers that administer these complex infusions at a much cheaper cost than hospitals are likely to be the hardest hit. Unlike mega-hospital systems with multiple lines of business and revenue streams, they have little ability to cost-shift. This would be tragic for patients who rely on these community providers who deliver the drug administrations at a fraction of the price of hospitals. As a result, a significant number of patients would be unable to obtain the most effective treatments their doctors would prefer to administer because those treatments would be rendered unaffordable for providers under the MFN. But it’s exactly what the administration’s own actuaries predict — noting that nearly one in five patients would have “no access” to their medications.

This barbaric proposed policy where the government seems to be deliberately tormenting the healthcare providers and innovators that seek to treat patients with complex and debilitating diseases stands in stark contrast to an incredibly successful partnership the government initiated with industry to bring COVID vaccines to market in record time.

Commenting on the success of Operation Warp Speed, Bruce Booth of Atlas Venture put it best: “Science is leading us out of the pandemic. The COVID vaccines being developed and now deployed by multiple companies brought a constellation of biotechnologies together, evaluated them in enormous clinical trials, all in record time. Regulators helped facilitate their rapid development, while maintaining a high bar for efficacy and safety.

“Same goes for a number of new anti-viral antibodies and medicines. Despite the hype about whacky treatments, data from well-designed frontline trials ultimately seem to have won — proving that other candidate medicines didn’t work [allowing us to cast aside ineffectual therapies],” he concluded.

While the logistics of vaccine distribution can certainly be improved, moving several vaccine candidates from discovery through substantial, rigorous clinical trials, and then ramping up massive production in a matter of months, is an accomplishment that should not be overlooked or dismissed. It is an incredible achievement of government-industry partnership and our best hope to return America and the world to normalcy after so many lives have been lost and businesses and families decimated.

Moreover, it stands as the manifestation of how government and industry should be partnering to solve pressing public health matters in contrast to the MFN, which would result in upheaval and chaos that would irreparably harm patient care.