Effective in 2022, the “Part D Payment Modernization Model” will permit Part D and Medicare Advantage plans to change therapy for patients stabilized on anticonvulsants, immunosuppressants, antidepressants, antineoplastic, and antipsychotics.  The change would apply to HIV/AIDS medications in the following year.  In addition, the proposal allows plans to restrict formularies to just one drug per therapeutic class, instead of the two drugs per class, as has been the case since Part D was enacted.

The impact of allowing plans to switch or to prohibit access to medications to the most vulnerable patients may be incalculable to their care. This wasn’t an 11th-hour regulation.  It was an 11:59.59 regulation that will harm patient access for a program that is already effectively controlling costs.

According to the CMS Office of the Actuary, average Part D monthly premiums have actually decreased for four consecutive years, from $35.62 in 2017 to $31.80 in 2021.  While there is a wide variety of plans and plan premiums, the base premium has held relatively steady over the past decade, fluctuating in the low $30s over that time period.  Similarly, Part D costs have been stable, with an annual growth rate of about 1.6% since 2015. The Medicare Payment Advisory Commission reports that 80% of beneficiaries report their drug plans “provide good value with reasonable cost-sharing.”

Sacrificing patient access to necessary therapy when costs are steady for an outgoing administration is hard to understand, but perhaps Trump officials were reacting to the latest polling as they shut out the lights. A January poll of 2,000 people by The Campaign for Sustainable Rx Pricing (a group critical of the drug industry) found that 96% of those surveyed believe lowering drug prices is an important challenge facing Americans.

The pharmaceutical industry’s hesitation is due to the explosive growth of contract pharmacies since the Health Resources and Services Administration (HRSA) released guidance in 2010 allowing 340B covered entities to establish arrangements with an unlimited number of pharmacies.  The Berkeley Research Group’s October 2020 study documents a 4,228% increase since that guidance, and now, 27,000 pharmacies participate in the program, with half of the 340B profits reaped by four large Fortune 20 pharmacies — Walgreens, Walmart, CVS Health, and Cigna’s Accredo specialty pharmacy. The advisory opinion is now being litigated by three manufacturers in separately filed lawsuits. 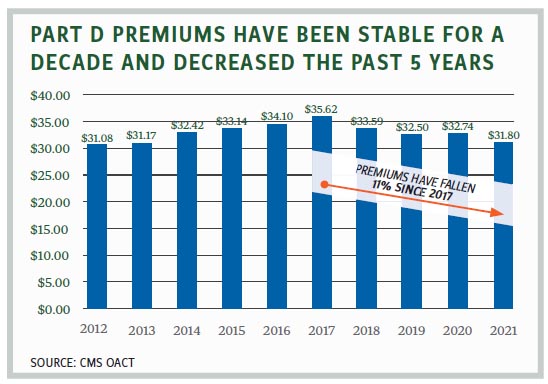 This increased government activity to leverage further price concessions from the industry is belied by government statistics showing decreased out-of-pocket cost burden to individuals in all demographics for their prescriptions over the past decade. In December 2020, the Agency for Healthcare Research and Quality, an arm of HHS, released analysis from the National Health Expenditure Accounts that showed, adjusting for inflation, the following:

The data excludes drugs used in the inpatient and physician office settings, and accounts for patients switching to cheaper generics. But it is compelling evidence that much of the populist rhetoric on prescription drug pricing is hyperbole.

Still, out-of-pocket costs remain a real challenge for chronically ill patients enrolled in health plans with high deductibles and coinsurance. Health plans negotiate significant rebates from brand-name manufacturers. But patients are paying for their prescriptions at the full, undiscounted price in the deductible and on their coinsurance, where they pay a percentage of the drug’s list price.

A recent study by IQVIA found health plans are increasing the amount chronically ill patients pay out-of-pocket for brand-name medicines.  Between 2015 and 2019, plans increased out-of-pocket obligations 32% for depression, 50% for HIV, and 55% for anticoagulents. That study also found pharmaceutical patient assistance “coupon” programs were critical in constraining out-of-pocket costs.  Those programs cut patient out-of-pocket spending by 81% for MS drugs, 74% for oncology drugs, 91% for HIV, and 67% for depression. On average, cost-sharing assistance helped patients taking HIV or oncology medicines with more than $1,600 toward their out-of-pocket costs in 2019, and helped patients taking MS medicines with more than $2,200.  However, coupon programs are under attack by many health plans that employ “accumulators” that exclude the value of that assistance from counting toward the deductible.

In one piece of good news: In November, the Trump administration issued a final regulation replacing the safe harbor for retrospective rebates provided by manufacturers to Part D health plans and PBMs with a new safe harbor that would permit point-of-sale rebates or discounts that will lower patients’ costs at the pharmacy counter.  It also permits service fees that are unrelated to price or volume.  The rule is not slated to go into effect until 2022, and the Pharmaceutical Care Management Association (representing PBMs) filed litigation in January attempting to block implementation, arguing that the administration did not abide by the Administrative Procedures Act and that the rule will result in higher premiums and costs to the federal government.

Biden Takes the Lead on Pharmaceuticals

Hopefully, President Biden will adopt a more thoughtful approach than the impulsive and combative President Trump, who treated the industry as a populist punching bag.  The priority will be solving the COVID vaccine distribution problem that has hampered timely administration of the vaccines, which the industry produced in record time, to our most vulnerable population.

Then, the Biden administration will have to decide whether to finalize or withdraw these proposals, and, more fundamentally, whether to continue to pursue Speaker Pelosi’s legislative agenda of tying Medicare and commercial plan reimbursement to an index of foreign countries and empowering the Secretary of HHS to negotiate for even larger price concessions.  That will come later in the year after Congress considers the $1.9 trillion COVID relief package President Biden has proposed.