Norway is known worldwide for its offshore industries, including oil, gas, and fishing, as well as mining and forestry, but what is perhaps less well-known is that the country has an emerging biotechnology industry, including biopharma, medical biotechnology, and biorefining (the process of refining products from biomass such as waste from the fishery or timber industries). 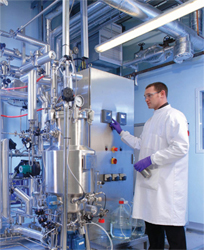 “There are quite a large number of biotechnology start-ups in Norway, spinning out from universities and research institutions,” says Øystein Rønning, special adviser at the Research Council of Norway. “Most of these are in the biopharma sector, but others include marine biotechnology, such as fish feed and fish genetics.”

One of the drivers for the industry is the Norwegian government’s national strategy for biotechnology, which is targeting the environmentally sound provision of healthcare, food, clean water, and energy for a growing global population. The strategy runs from 2011 to 2020 and has been designed to balance basic and applied research, innovation, and commercialization in biotechnology. It is backed by the Research Council of Norway and Innovation Norway, an organization that promotes and supports innovation in industry.

A Biotech Industry With Potential
The Norwegian pharmaceutical industry has a long history, growing out of the country’s long heritage in the biomedical sciences. However, biotechnology in Norway is still a relative newcomer, only emerging in the 1990s.

“There is a lot of potential, with Norway having plenty of resources for biotechnology, such as biomass from industries such as fishing, agriculture, and timber,” says Jan Buch Andersen, who sits on the boards of Industrial Biotech Network Norway, Barents Biocentre Lab, and the Biotek2021 Program in the Research Council of Norway, and is also business development director at Tromsø-based ArcticZymes. “Norwegian biotechnology has the basic tools, but the industry is not yet established. There has been phenomenal growth of biotechnology in Denmark, which is a smaller country. If it can be achieved in Denmark, it is also achievable in Norway.”

Facing The Funding Gap
One of the key challenges facing biotechnology in Norway is the funding gap. While the country is not alone in this, it is a particular problem for this region because its economics are so tightly focused on high-value and low-risk technologies such as oil and gas. Investors are reluctant to put money into higher-risk projects such as biotech while returns are virtually guaranteed from the offshore industries.

“The offshore oil and gas industries are high volume and high profit, and so private capital and investment is more likely to go to these; so it is hard to get money for other industries such as biotechnology and ICT (information and communications technology). This will be the biggest challenge and will need both governmental and private investment,” says Rønning. This gap in funding means that few of the Norwegian start-ups are becoming sustainable, according to Rønning, and those that do become targets of mergers and acquisitions or move away from Norway, further depleting the embryonic industry.

Ole Jørgen Marvik, sector head of health and life sciences at Innovation Norway, has also seen this investment deficit. He says, “We would like to see more projects and could in fact have invested more in the biotech sector. Our grant volumes for healthcare projects have been flat for the past three years, and I suspect that companies are struggling to raise private capital to match the public funding opportunities.”

To try to bridge the gap, a number of key sources of financing and support have been put in place recently that could have potential to move the industry forward. These come from both private and public sources.

Companies Finding The Funding
While finding private funding and venture capital is hard for Norwegian biotech companies, particularly those that are working on early-stage research, there have been some recent success stories. For example, in 2012, Targovax secured NOK18.5 million (around $3.1 million) in public and private funding for further development of its cancer vaccine TG01 in pancreatic cancer.

Also in 2012, BerGenBio completed an $8.8 million Series A financing round to take its lead oncology compound BGB324 into clinical trials and to develop a companion diagnostic. Lead investors included Sarsia Seed, a Norwegian seed capital fund, and Investinor, a government- funded investment company. This funding will allow BerGenBio to make the step from preclinical to clinical development.

BIOTEK2021
BIOTEK2021 (Research Programme for Biotechnology for Innovation) is the Research Council of Norway’s most recent biotechnology funding initiative. It will run from 2012 through 2021 and follows the completed Functional Genomics in Norway (FUGE) program. The aim of BIOTEK2021 is to help the Norwegian biotech industry to mature and make sure that the knowledge gained from FUGE, which had more of a focus on basic research, isn’t lost. The program will have around NOK140 million (approximately $24 million) available each year.

“Until now, Norway has spread its funding rather thin, giving small amounts to many groups of researchers. BIOTEK2021 gives larger grants to consortia with a long-term perspective,” says Andersen. “It has industrial relevance written in.”

The Research Council of Norway also provides funding for individual projects, awarding up to 50% of total costs for companies, and 100% for universities and research institutions. These grants, which are worth between one and ten million kroner each year, are for earlystage research projects lasting up to three or four years.

The U.K.-Norway Collaboration
In February 2011, at the BIOPROSP bioprospecting conference in Tromsø, Norway, the United Kingdom’s Technology Strategy Board (the U.K.’s innovation agency) and Innovation Norway signed a five-year memorandum of understanding to support collaboration between industry in Norway and the U.K. in industrial biotechnology and biorefining. While this isn’t a new source of funding, it is ongoing and will fund a new group of projects every year of the project.

The collaboration has funded eight projects so far, four in 2011 and four in 2012, at a total value of just over €2 million. Organizations involved have included seven U.K. companies, eight Norwegian companies, and one U.K. university. Merlin Goldman, lead technologist in high-value manufacturing, Technology Strategy Board, confirmed that he expects to see a similar number of new projects supported for 2013.

“The aim of the collaboration is to generate projects and create more high-value chemicals and in the process grow the Norwegian biotech sector, which is still young. Norway has biorefining expertise and access to biomass from the wood, fishing, and agricultural industries, and the U.K. has expertise in industrial biotechnology and specialist areas such as biocatalysis and formulation. Working together, we can drive discoveries toward the marketplace,” says Goldman. “The U.K. companies had a free choice as to whether to partner with a U.K. or Norwegian company. We were pleasantly surprised to see how many of them chose a Norwegian one.”

Two of the first four funded projects are expected to launch products this year. One of these is a collaboration between Borregaard, Unilever, and Croda to develop alternative sources for cellulose as an ingredient in cosmetics. Borregaard is a Norwegian biorefinery company, making environmentally friendly biochemicals, biomaterials, and bioethanol from sustainable biomass, including waste timber. The second is the result of a collaboration between Aquapharm Biodiscovery in Scotland and Aqua Bio Technology in Norway. The Oban-based company was founded based on discovery of bioactives produced by bacteria found in Scottish rock pools; they now have a culture collection sourced from authorized locations around the world.

The Technology Strategy Board has created a network of organizations from the U.K. and Norway, which currently includes around 250 members and recently launched its Industrial Biotechnology Directory. This is freely available and features U.K. and Norwegian companies and research technology organizations involved in biorefining and industrial biotechnology.

While the sector’s future growth will be dependent on continued funding, practical support for the fledgling industry is also important. This needs to include the provision of reasonably priced lab space and services for start-up companies, which allows them to put more of their precious capital into R&D. Barents Biocentre Lab, created through a collaboration among industry, the University of Tromsø, Norut (Northern Research Institute), and Norinnova, provides access to laboratories and equipment. Bioclusters, such as BioTech North, a growing cluster of approximately 30 companies and organizations based in north Norway, or the national parallel — Industrial Biotech Network Norway — can offer support for small companies, as well as shared infrastructure and networking opportunities.

The Future of Norwegian Biotechnology
Moving forward, the Norwegian biotechnology sector has potential to supplement and even replace the role of some of the traditional income sources in Norway. These include the oil and gas industries or the small molecule-based traditional pharmaceutical industry. To achieve this will require continued investment, as well as making connections globally.

“These investments have created a foundation for building a biopharma industry,” concludes Asbjørn Lilletun, team leader for life sciences at Norinnova Technology Transfer. “Norway has a lot of platforms and services that can help to bring candidates through to the clinic. It needs to realize all these opportunities and build on its reputation, including putting more investment into commercialization, so that its companies can bring products to market.”

While biopharma is a vital part, for the Norwegian biotechnology sector to be really significant, Norway will need to exploit its breadth of skills and experience and focus across the whole of the industry.