Buried in the President’s 2,000-page FY 2014 budget is a table showing the cost of healthcare reform’s subsidized coverage in newly created health insurance exchanges will be twice as expensive in 2014 as his budget projected just two years ago. That’s right — the President’s own actuaries are now conceding health reform will be substantially more expensive than they originally let on.

No explanation is provided for the ballooning estimate. But there are only two possible reasons: 1) per capita cost will be higher; or 2) there will be more individuals accessing subsidized coverage. Certainly, the Supreme Court’s decision to make Medicaid expansion optional for states could drive more coverage to the exchanges.

But what about employers’ incentives to dump their employees into the exchanges?

Looking back at the tussle over the Affordable Health Act (ACA), proponents of healthcare reform appeared to have drawn a royal flush from the Congressional Budget Office (CBO). CBO speculated that just 8 million of the 162 million individuals with employer-sponsored coverage would lose that coverage and get subsidized coverage in the exchange.

This was an unbelievably favorable budget estimate because it predicted almost every dollar spent by the federal government would result in an expansion of coverage to the uninsured rather than displace employer-sponsored coverage. It validated the Obama Administration’s narrative that most people would keep their current coverage and also tremendously understated the true cost of health reform.

How will employers react when they realize that they can typically save $18,000 for a family policy and only pay a $2,000 penalty so their employees can get subsidized coverage in the exchange?

Most economists would argue the math is not that simple. Employer-sponsored health insurance is exempt from income and payroll taxes; thus, it is, in essence, subsidized by the government. A dollar of health benefits is worth more than a dollar of wages. This tax subsidy is equal to the individual’s marginal tax rate, which increases with income.

But what if we compared that tax subsidy to the meanstested subsidy for individuals enrolling in the insurance exchange? Those subsidies are enormous for low-income individuals and gradually phase down as income increases. The ACA limits premiums individuals pay for their coverage to a percentage of their income and requires the government to subsidize the remaining amount up to a benchmark plan (the second cheapest “silver plan” in the exchange). In addition, low-income individuals also receive cost-sharing subsidies.

But for a small employer who pays no penalty for failing to offer coverage, that tipping point does not occur until the employee earns $80,000 a year.

According to the U.S. Census Bureau, 58% of households earn less than $60,000 a year, and 79% of households earn less than $100,000. Yet in the face of this math, CBO predicted —as I stated earlier — that only 8 million people, of the 19 million receiving subsidized coverage in the exchange, are in the exchange because they were dumped by their employer.

What if just 10% of those with employer-sponsored coverage lost that coverage and were dumped into the exchange? That would result in a 50% increase of those receiving subsidized coverage, as it would result in another 16.2 million people (10% times 162 million) getting government-sponsored coverage. A 20% drop more than doubles the number in the subsidized exchange. The sensitivity analysis is breathtaking. No wonder a McKinsey survey predicts 30% of employers will drop coverage. A different survey of 71 Fortune 100 companies found employers could save $28.6 billion in 2014, which would impact 10.2 million employees and dependents. 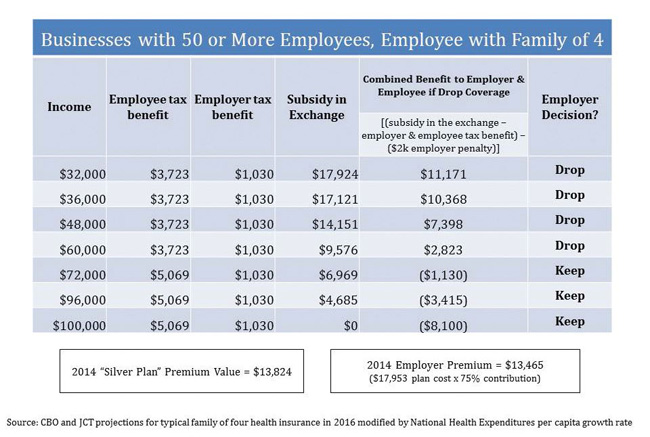 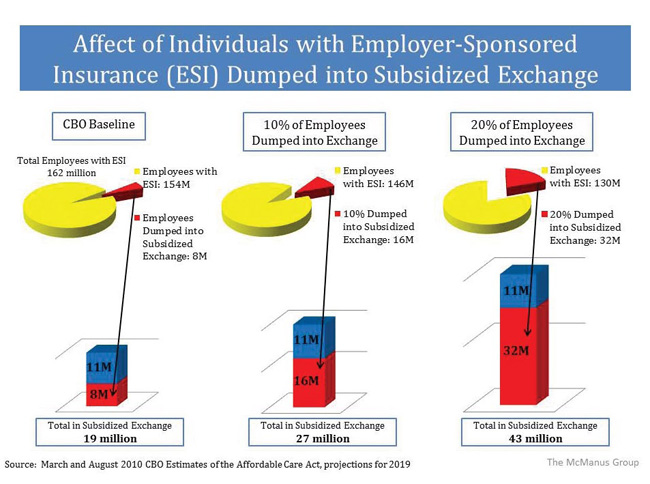 The Administration and healthcare reform proponents often fall back on a more nebulous argument — employers offer health coverage to attract and retain workers. Yes, that’s certainly the case now. But will that be the case if workers can obtain comparable coverage offered by the government with employers actively directing them to exchange websites and assisting in paying their unsubsidized premiums?

This phenomenon does not have to occur overnight to have a substantial impact. The chaos of the initial implementation of healthcare reform will indeed likely encourage most employers to retain coverage in the short term. A number of other factors unrelated to these subsidies will roil the insurance market.

But even if a minority of employers drop coverage in the next several years, others may be compelled to join them in order to remain competitive. How would Verizon and AT&T respond if Sprint were able to substantially cut its cost by dumping workers into the exchanges and started cutting its rates? How would large chain pharmacies respond if a company like Walgreens created a subsidiary to provide employer-sponsored coverage to its highpaid pharmacists and a different subsidiary employing low-paid clerks who were shuffled off to the exchange for their healthcare?

The momentum for employers to offer coverage to hire and retain coverage will be reversed.

The long-term impact of such a phenomenon?

John McManus is president and founder of The McManus Group, a consulting firm specializing in strategic policy and political counsel and advocacy for healthcare clients with issues before Congress and the administration. Prior to founding his firm, McManus served Chairman Bill Thomas as the staff director of the Ways and Means Health Subcommittee, where he led the policy development, negotiations, and drafting of the Medicare Prescription Drug, Improvement and Modernization Act of 2003. Before working for Chairman Thomas, McManus worked for Eli Lilly & Company as a senior associate and for the Maryland House of Delegates as a research analyst. He earned his Master of Public Policy from Duke University and Bachelor of Arts from Washington and Lee University. He can be reached at jmcmanus@mcmanusgrp.com.