Not to build a platform, but to create new, FDA -approved therapeutics for unserved indications in the ear, this developer focuses on novel delivery.

SNAPSHOT
Otonomy is a private company developing a line of new therapeutics for the ear using its own proprietary formulation of existing antibiotics and steroids. Its OTO-201 (reformulated ciprofloxacin) is now in Phase 3 trials for use during ear-tube placement surgery, and OTO-104 is currently being evaluated in the first of two pivotal studies for the treatment of Meniere’s disease. The company also has initiated a third development program, OTO-311, that utilizes a new molecule, the N-Methyl-D-Aspartate (NMDA) antagonist gacyclidine, for the treatment of tinnitus. 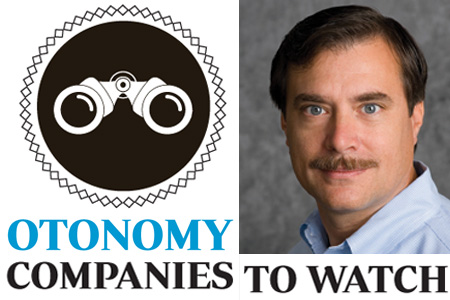 WHAT’S AT STAKE
Whatever flows in can also flow out. At least, the simple rule applies to the ear, as anyone who has ever used ear drops knows well. Otonomy chose its modus operandi for that reason. Clinical research already had shown the usefulness of “intratympanic (IT) drug treatment,” as in ear-drop delivered antibiotics in the treatment of otitis media and steroid solutions to treat patients with Ménière’s disease or acute onset hearing loss. But the swift elimination of the drops from the ear limited treatment efficacy, and no one had addressed the problem. Thus Otonomy began with the aim of developing special formulations of existing drugs rather than original molecules for the ear conditions.

The company developed its proprietary “sustained- exposure” formulation not to get into the platform business, but to overcome the ear-drug delivery problem for the large patient groups suffering from the curse of dizziness, hearing loss, and other discomforts of ear disease. Backed, it says, by a strong vault of patent protection, it is going after indications where the FDA has never specifically approved a drug. For those reasons, says President and CEO David Weber, “Otonomy is able to maximize its market opportunity and support a premium-pricing position.” Weber says the same strategy also limits risk.

Heretofore, doctors have improvised dosing to the inner ear. “Physicians use oral and local injections (called intratympanic injections) of steroid solution off-label to treat these conditions,” Weber says. “However, dosing to the inner ear is limited and variable, which necessitates repeat administration and likely compromises efficacy.” Otonomy’s formulation uses an injectable thermosensitive gel to slow elimination of the drug from the inner ear, thus boosting effectiveness and eliminating the need for more frequent injections. Short-acting ear drops are approved only for outer ear and recurring middle- ear infections following ear-tube placement, but not for OTO-201’s lead indication: intraoperative use during ear-tube placement surgery. According to Weber, ear specialists have identified many additional indications for OTO-201 — infections throughout the ear left unaddressed by short-acting ear drops or any other treatment.

Although combination of components in the sustained-exposure formulation is novel, the parts themselves — the gel, APIs, and injector — are all off the shelf. Thus, says Weber, there are no pricing, licensing, or availability issues for these materials. “We manufactured clinical trial material for our OTO-201 Phase 3 studies at commercial scale, and are doing the same to support the OTO-104 late-stage program.”

Otonomy’s recent C round will fund the Phase 3 trials it now has underway. The company must continue to explore other alternatives such as global partnerships for further clinical development. But, because the physician audience is relatively small and would require only about 100 reps in the U.S. market, the commercial partnering strategy has more nuance: “Our current business plan is to self-commercialize our products in the United States and work with partners for all other markets.” For a company with broad worldwide patents and original products for unserved indications, the strategy seems logical and appropriate. It is also a good example of how a novel platform, even a new creative assembly of existing pieces, can be put to an immediate, targeted therapeutic use.