Outsourcing To CROs And CMOs In Emerging Markets In 2014

In Nice Insight’s most recent pharmaceutical and biotechnology outsourcing survey, 70 percent of all respondents indicated they would consider CROs and CMOs in emerging markets, such as Brazil, China, and India, when selecting suppliers for their upcoming projects. Of that 70 percent, 49 percent already work with an offshore supplier. Another 31 percent indicated they are aware of reliable businesses in emerging markets, but simply haven’t worked with one yet. One in five said they are willing to outsource to emerging markets but do not know any reliable CROs/CMOs yet.

On the flip side, respondents who said they would not consider suppliers in emerging markets were primarily concerned about quality level (47 percent), followed by regulatory (33 percent) and intellectual property (26 percent). Complicated logistics and communication issues were each mentioned by 23 percent of respondents. Notably, 27 percent said they have simply not considered it.

There were some significant differences between buyer groups when it comes to offshoring to emerging markets. Big Pharma (71 percent), Biotech (70 percent), and Emerging Pharma (67 percent) showed a similar likelihood of considering offshore CROs and/or CMOs. However, Emerging Biotechs indicate they are much more likely to consider suppliers in emerging markets (86 percent), whereas Specialty Pharma sway strongly in the opposite direction, with only 61 percent considering this option. So it correlates that respondents indicating that their company considers emerging market suppliers are more likely to be involved in the development of biologics (81 percent) than those that don’t (55 percent).

The volume of projects a company has to outsource may influence consideration of emerging market CROs/CMOs. Respondents who consider them reported that they will outsource an average of five different services in the next 12 to18 months, compared to an average of 3.3 services among those who don’t consider emerging market suppliers. One could conclude that this might be influenced by cost, but that would be false. After all, the group that considers emerging market suppliers has a larger annual outsourcing expenditure, on average, than their counterparts who do not.

Where Is Offshoring Happening The Most?
Ultimately, 1/3 of the survey respondents (34 percent) already work with suppliers in emerging markets. Those who do tend not to send all of their work offshore — they actually split their projects across several markets, with some inclusion of CROs and CMOs in emerging markets. Among these outsourcers, an average of 26 percent of projects will be awarded to businesses in the U.S. and Canada — a notable decrease from two years ago when this group reported that 36 percent of outsourced projects were awarded to North American businesses. This is a big trend worth noting. However, no single emerging market picked up a significant amount of the work shifted away from the U.S. and Canada — in fact, there was a 2 percent uptick in projects outsourced to China (17 percent), India (13 percent), Western Europe (12 percent), Argentina and Brazil (11 percent), and Eastern Europe (9 percent). The remaining 13 percent of outsourced projects was split among Korea, the Middle East, and Thailand and Vietnam.

It’s likely that existing concerns about outsourcing to emerging markets will remain a barrier for some decision makers in the near future. And there will always be projects that are best served by domestic suppliers for logistical or strategic reasons. However, data continues to indicate that there is a growing trend toward successful outsourcing to emerging markets, which is something all companies should consider in their longterm positioning strategies. We’ve heard reinforcement of this in qualitative interviews in the past year, and it also correlates with news reported this month relating to the implications of Obamacare. 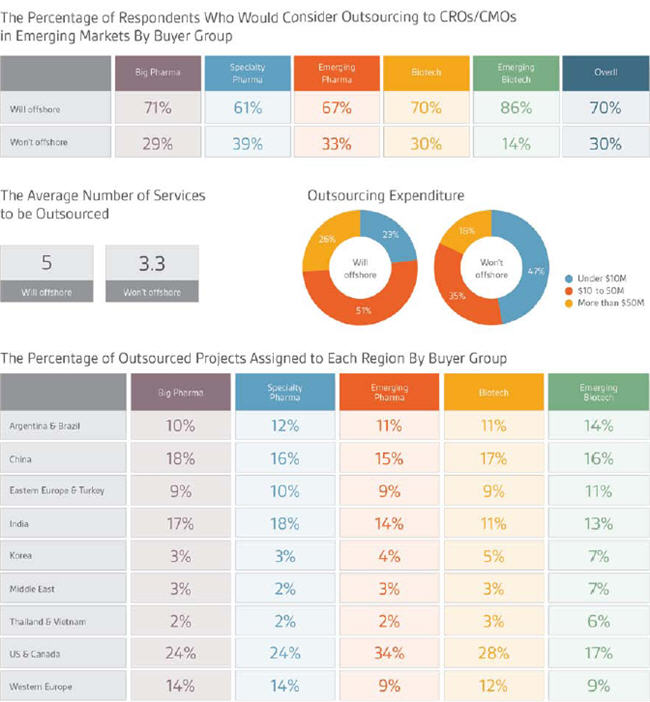 Survey Methodology: The Nice Insight Pharmaceutical and Biotechnology Survey is deployed to outsourcing-facing pharmaceutical and biotechnology executives on an annual basis. The 2013-2014 report includes responses from 2,337 participants. The survey is composed of 240+ questions and randomly presents ~35 questions to each respondent in order to collect baseline information with respect to customer awareness and customer perceptions of the top 100+ CMOs and top 50+ CROs servicing the drug development cycle. Five levels of awareness from “I’ve never heard of them” to “I’ve worked with them” factor into the overall customer awareness score. The customer perception score is based on six drivers in outsourcing: Quality, Innovation, Regulatory Track Record, Affordability, Productivity, and Reliability. In addition to measuring customer awareness and perception information on specific companies, the survey collects data on general outsourcing practices and preferences as well as barriers to strategic partnerships among buyers of outsourced service.