Perils And Challenges Of Building A Biotech In Kentucky

Start-up funding for new biotechs has always been a dicey proposition. But today, investment opportunities are even more precarious, both from the private and public sides of the equation. According to Reuters data, venture capital investments in biotechnology declined by 33% in the first quarter of 2013, compared with the previous period in 2012, which had dropped 14% from 2011.

On the public side, NIH will suffer the loss of a trillion dollars over the next 10 years unless the sequestration cuts are reversed. These cuts will dramatically impact the ability of NIH and other government agencies to support small biotech companies through the Small Business Innovative Research (SBIR) program. To date, more than $16 billion has been allocated by the federal government for support of innovative research leading to commercialization, but it is not clear how the program will be affected in the coming years.

Biotech Start-ups: Where To Locate?
In this climate, biotech start-ups must do everything they can to optimize their chances for success. The path to this goal has traditionally been through the major hotbeds of biotechnology — San Diego, with at least 400 biotechs; the Bay Area, with several hundred; or Maryland, with more than 500 companies. A number of other cities, including Seattle, Boston, and Los Angeles (home to the behemoth biotech Amgen) have welcomed many start-up biotech firms.

The basis for the decision to locate in a recognized biotechnology-friendly environment is guided by the availability of human resources and the proximity to academic centers, hospitals, and private-research institutions. Support services, such as biotech suppliers, are readily available in these zones. Venture capital firms are located nearby, and their management has an excellent understanding of the industry. Finally, these areas are noted for their high quality of life with excellent schools, recreational and leisure time activities, and cosmopolitan lifestyles.

In contrast, the center of the United States has been defined by biotech executives as what they have to fly over in order to get from one coast to the other. Whereas major cities, including Chicago, St Louis, Cleveland, and Kansas City, are home to numerous medical device and major pharma companies, the biotech sector tends to be underrepresented in these regions.

An Overlooked Region Offers Possibilities
So it is noteworthy that bioLOGIC, a biotechnology accelerator located in the metropolitan Cincinnati area, has adopted an unconventional approach to initiating small, innovative biotechs. As such, it tests a number of standard assumptions that have guided the industry since its inception. The company was founded in 2006 by Nigel Ferrey and Dr. Ray Takigiku, who were dedicated to building a community of networking researchers. It now provides resources for about 14 companies — among these is Bexion, which seeks to develop a cancer therapeutic. Bexion was also founded in 2006 by Takigiku and rents office and lab space from bioLOGIC.

The most significant factor that entered into bioLOGIC’s decision to locate in northern Kentucky was the availability of a unique support vehicle for emerging technologies. The state provides generous sums for SBIR recipients in the form of 100% matching funds. These figures amount to a doubling of up to $150,000 for Phase-1 SBIR awards and up to $1 million matching support for a Phase-2 SBIR. In addition, the Kentucky legislation includes “Phase Zero” and “Phase Double Zero” support programs, which award up to $4,000 to help cover the costs of SBIR proposal preparation. Many other states provide supplements to SBIR awards, but none as munificent as the Kentucky program. While even doubling the size of an SBIR award is not sufficient to fund a biotech company, there is substantial prestige attached to a concept that is approved by a peer-review panel. This provides an important marketing tool in the recruitment of additional funds from private sources.

Cincinnati sits on the Ohio River, which forms the border with northern Kentucky. The bioLOGIC facility is located in Covington, KY, a 19th century river community facing the downtown Cincinnati skyline. This location takes advantage of proximity to a major city with two outstanding research institutions, Cincinnati Children’s Hospital Medical Center and the University of Cincinnati. The two campuses are adjoining; Cincinnati Children’s is recognized as one of the top pediatric hospitals in the world.

Ferrey and Takigiku’s decision to locate the biotech accelerator in Kentucky rather than Ohio was based on a number of considerations in addition to the generous SBIR program. Although Covington is a 5-minute drive from downtown Cincinnati, it retains a small-town flavor and, along with it, small-town living costs and an ample range of available commercial real estate. For example, in Covington, current average rates for class A rental space are $15.42 per square foot versus $19.23 in downtown Cincinnati.

In addition to the SBIR matches, Covington offered a small pond for a large biotechnology fish to splash in. City fathers and mothers welcomed bioLOGIC with unbridled enthusiasm, and the Duke Energy Foundation awarded a $100,000 grant to the city, which went to bioLOGIC and was critical in providing the recognition and prestige to build the company in its early days.

bioLOGIC’s home sits in stark contrast to the lavish space-age architecture favored by many biotechnology companies. In construction of its wet labs and office space, the company chose to rehab an historic structure, an 1877 livery stable that had been used as a garage and a warehouse over the years. The expansion encompassed 8,000 square feet, and costs ran to one million dollars, bringing the facility’s total square footage to 14,000. There is an adjoining 4,300 square feet of unfinished space in the building available for future development. In addition to Bexion, there are six other companies listed on the bioLOGIC website, and numerous negotiations with other start-ups in the works.

The company’s location also figures into another tax incentive program not usually available to biotech companies. Both state and federal laws provide for the availability of historic tax credits for the renovation of qualifying structures, subject to guidelines for appropriate exterior preservation. The tax credits can be quite generous, amounting to up to 50% of the costs and can be extended out over a number of years. bioLOGIC is midway between the Covington train station, now a museum, and the Mutter Gottes Catholic Church, a massive Italian Renaissance revival structure built in the 19th century. BioLOGIC was able to meet the Federal legislative requirements and obtained a substantial boost from this source. 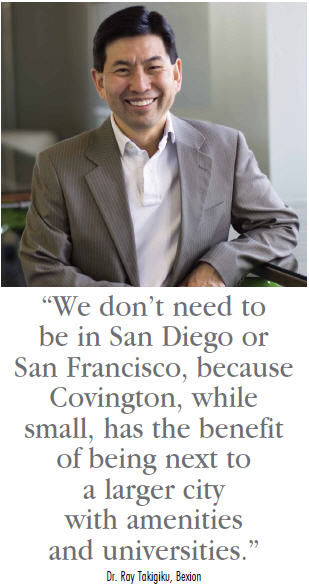 The Search For Therapeutic Windows Of Opportunity
Takigiku, the CEO of Bexion, is a transplant from the Proctor and Gamble Pharma division, where he was director of core technologies and played a role in the development and marketing of Actonel, an anti-osteoporosis therapeutic, and Asacol, for the treatment of ulcerative colitis.

Bexion’s technology is based on the fact that virtually all cancer cells possess the membrane component phosphatidylserine on the outside of the cell membrane, rather than on the inside, as is the case for normal cells. Saposin C is a possible therapeutic agent owing to its ability to interact with the phosphatidylserine present in the cancer cell outer membrane. Bexion has developed Saposin C–dioleoylphosphatidylserine nanovesicles and evaluated their killing potential on malignant and nonmalignant cell lines as well as tumors in experimental animals. The compound, referred to as BXQ-350, targets and treats a broad range of solid tumors without damaging nonmalignant cells. The company anticipates entry into clinical trial later in 2013.

“While our long-term goal is developing treatments for cancer, I am hopeful that we can open a dialog for new approaches that move away from targeting abnormal genes,” Takigiku says. “Our strategy is just one of a number of new ways of looking at cancer treatment.”

Bexion’s approach is quite different from most therapeutics that target cancer cells, given that it addresses a fundamental property of the cancer cell, without which it cannot flourish. For this reason it seems unlikely that tumor cells could develop resistance to the drug. Moreover, the side effects from its application would be predicted to be much less severe than conventional chemotherapy, which is often accompanied by devastating side effects.

A Business Model That Fits The Environment
Takigiku is enthusiastic concerning his business plan. “Covington has pluses and minuses,” he stated. “One disadvantage is that northern Kentucky has no research establishment and no medical school. But weighing all the relevant factors, this was the right choice for Bexion. We have Fortune 500 companies in the area, and we draw from a diverse population whose experience and history motivate us to drive forward. We can create a space in which to work that is accessible and affordable while meeting our needs for a stimulating social and intellectual environment. We don’t need to be in San Diego or San Francisco, because Covington, while small, has the benefit of being next to a larger city with amenities and universities. I believe the network of northern Kentucky cities that have a common hunger to be better drives bolder thinking and quicker action on opportunities. That sort of mentality fits in with our idea of a pioneer spirit. We can’t afford NOT to get things done.”

The companies that are forming under the bioLOGIC umbrella constitute the basis for a community of investigators that are building collaborative agreements with themselves and with other research groups both locally and internationally. “We founded Bexion on the concept of developing new cancer therapies and building our own network for cancer research and expanding our efforts within and beyond the community,” Takigiku added. “Similarly, bioLOGIC has a sister company in Ft. Collins, CO, and affiliations with offices in Shanghai, Australia, and France.”

The Future Is Now
Both Bexion and bioLOGIC have chartered their own respective courses, while taking advantage of the desire of a community to expand its high-tech base and the willingness of the state and local foundations to back up their expansionist goals with solid cash. This game plan could not have succeeded if the region were already thick with high-tech enterprises. As long as the companies within bioLOGIC are able to move their products forward, they will be likely to gather more private and governmental support.

Taking biological inventions from the laboratory to the clinic is a challenging task, requiring years of effort and evaluation. Bexion will need funding and clinical success as it moves its technology forward in the coming years. So far its efforts to confront established wisdom have brought gains that probably could not have been realized if it had followed the conventional routes to biotechnology development. But its eclectic business model is a work in progress that will be judged by the company’s success.