According to the World Health Organization, 1.3 million people die each year from unsafe injection practices such as needle sticks, blood-born pathogens, and the reuse, sharing, and unsafe disposal of syringes. As more parenteral drugs come on the market — driven by the increase in biological drugs that must be injected into the body — it is important that improved safety measures accompany these medications. Technology is playing a part in improving injectable drug safety with the introduction of retractable safety syringes to prevent needle sticks, and prefilled syringes — with or without retractable needles — to improve patient safety and compliance and reduce the likelihood of contamination at the injection site.

According to Visiongain’s report, “Prefilled Syringes: World Market Outlooks 2011-2021,” prefilled syringes represent one of the fastest growing markets in drug delivery and packaging, with total revenues expected to reach $5.5B by 2025. Prefilled syringes also offer one of the highest growth potentials in the biopharmaceutical industry, with 20% CAGR over the past five years. There is good reason for this growth, as prefilled syringes are arguably a win for all. They offer improved safety for the patient by mitigating dosage errors; healthcare providers have faster access to injectable medications in pre-measured doses, and manufacturers save money through reduced overfill wastage that occurs with vials. In addition to the healthcare benefits, prefilled syringes also offer marketing differentiation for drug makers.

Strength In Regulatory And Productivity
Twenty CMOs included in Nice Insight’s annual research offer services for prefilled syringes. We reviewed how the market perceives these brands with respect to the six outsourcing drivers and learned that their strengths lie in regulatory and productivity categories, which were ranked respectively third and fourth in order of importance by buyers of CMO services. On average, regulatory scores among CMOs that offer prefilled syringes were a point higher than the general CMO benchmark for regulatory, 75% vs. 74%. This bodes well for drug innovators concerned about the regulatory challenges that accompany the transition from vials to cartridges. And fortunately for outsourcers, 16 of the 20 CMOs that offer prefilled syringes also provide regulatory support. Productivity was the second highest scoring category for CMOs offering prefilled syringes. Again, we found the average score among these CMOs to be one percentage point higher than the general CMO benchmark for productivity, 74% vs. 73%.

Quality and reliability traditionally score high among buyers of outsourced services. Here, they tied for third place among prefilled syringe CMOs. The two factors were additional areas where these CMOs received higher scores than the typical, broader benchmarks. The average among the prefilled syringe subset was 73% for quality, two percentage points higher than the CMO benchmark of 71%. There was also a single percentage point increase in the reliability benchmark between CMOs offering prefilled syringe services and the broader grouping, 73% vs. 72% respectively.

Innovation often holds sixth place among the outsourcing drivers when ranked by survey respondents, but when viewed from the perspective of CMO performance perceptions, it was ranked one place higher—in fifth. With an average score of 72% among CMOs that offer prefilled syringes, the innovation score was the same as the broader CMO benchmark (72%). The prefilled syringe subset also averaged the same score for affordability as the mainstream CMO benchmark, each at 69%. Affordability tends to be the lowest scoring category regardless of groupings (CMOs, CROs, and service or technology related subsets), which should not come as a surprise since drug innovators are consistently facing cost pressures and the overarching goal of reducing drug development expense.

In this instance, however, poor affordability may be a misconception of sorts, as prefilled syringes have proven to be cost effective for several reasons, including the increased durability of plastic-based prefilled cartridges over traditional glass products that may crack or break, as well as the reduced overfill when compared to vials. The logistics associated with distributing prefilled syringes offer some cost benefit over traditional vials as well. For example, prefilled syringes weigh less and take up less space, which saves on both shipping and storage. In addition to cost efficiencies for drug developers, patients save money by self-administering drugs instead of going to a doctor’s office or infusion center — another area where the prefilled technology proves to be a win for all. 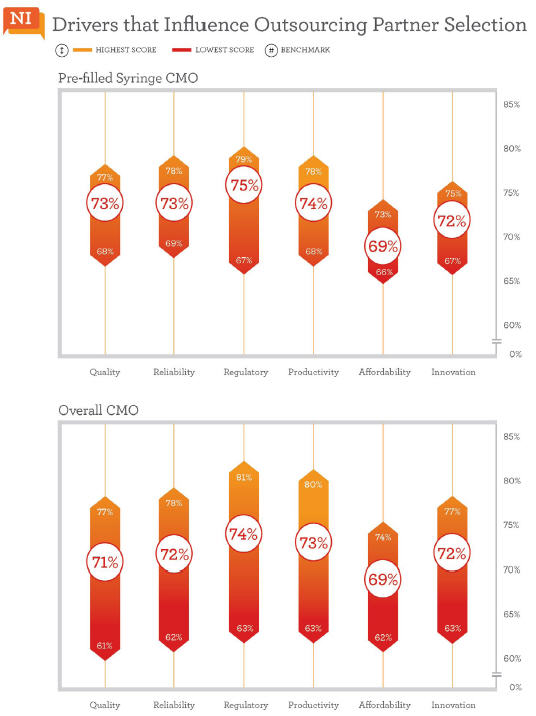 Survey Methodology: The Nice Insight Pharmaceutical and Biotechnology Survey is deployed to outsourcing-facing pharmaceutical and biotechnology executives on an annual basis. The 2012 sample size is 10,036 respondents. The survey is composed of 500+ questions and randomly presents ~30 questions to each respondent in order to collect baseline information with respect to customer awareness and customer perceptions on 170 companies that service the drug development cycle. More than 800 marketing communications, including branding, websites, print advertisements, corporate literature, and trade show booths, are reviewed by our panel of respondents. Five levels of awareness from “I’ve never heard of them” to “I’ve worked with them” factor into the overall customer-awareness score. The customer-perception score is based on six drivers in outsourcing: Quality, Innovation, Regulatory Track Record, Affordability, Productivity, and Reliability.

If you want to learn more about Nice Insight’s CRO/CMO report or to participate in the survey research, please contact Managing Director Nigel Walker of That’s Nice at nigel@thatsnice.com. If you have a question about the data or are interested in custom market research, contact Kate Hammeke at kate.h@thatsnice.com.