Prefilled Syringes: The Next "Big Thing" 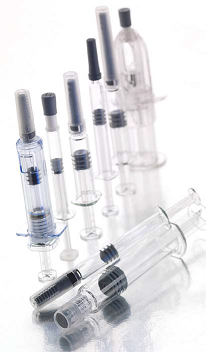 Until recently, most injectable drugs were mainly supplied to end users in sterile vials and syringes. However, the growing use of biologics and biotechnology drugs, coupled with a staggering increase in the number of patients who self-administer drugs to treat chronic diseases, has forced drug manufacturers to reconsider the vial-andsyringe format, which is prone to dosing errors and low patient-compliance rates. Because of this, prefilled syringes — single use, disposable syringes filled with a prescribed unit dose of medication — are rapidly replacing the traditional vial and syringe format to deliver protein-based drugs, sustained release formulations, and other parenteral medications.

Typically, prefilled syringes are made of glass and use a conventional plungerbarrel delivery mechanism. These syringes come in a variety of sizes with the 1.0 ml syringe being the most popular. Glass is the material of choice because it is strong, chemically inert, dimensionally stable, and easy to sterilize. Further, it is transparent, which allows visible inspection of a dosage form before it is injected. In recent years, syringe manufacturers introduced plastic prefilled syringes, mainly in response to the possibility of breakage and plunger failures. Nevertheless, “Glass is still the gold standard,” said Brian Lynch, program lead, health science & technology, immunization, BD Medical- Pharmaceutical Systems. Needle options for prefilled syringes include staked-in (needle is manufactured as part of the syringe) and luer cone or luer lok designs. Staked prefilled syringes are primarily used in medical and emergency situations (where treatment speed may be vital), whereas luered-prefills are mainly used for self-administration purposes. Because of growing concerns about needle stick safety and prevention, many commercially-available prefilled devices offer automatic needle shielding or retractable needle options. “Needle safety and prefilled syringe disposal continue to be an issue,” said Jo Anne Jacobs, manager of drug product technical services at Cook Pharmica.

Prefilled syringes are filled aseptically; sterile plungers are inserted, and individual units are packaged in blister packaging before shipping. To facilitate the filling process, sterile prefilled syringe barrels are usually shipped to filling facilities in nested carriers or tubs and then filled aseptically with automated fill-finish machinery.

Why This Market Is Poised To Grow

Like Kiang, Tony Pidgeon, Patheon’s senior manager of global science and technology, believes the convenience offered by prefilled syringes is what is mainly driving their uptake. Also, he stressed that “prefilled syringes help eliminate dosing errors, improve patient compliance, ensure greater sterility, and reduce the likelihood of contamination during the injection process.” 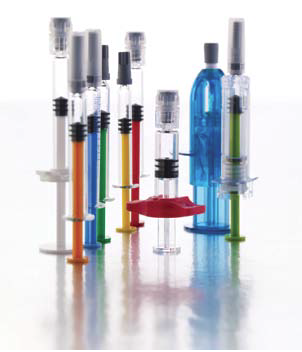 Healthcare reform, cost containment, and changing medical practices are also driving the uptake of prefilled syringes. To cut costs, patients are increasingly self-administering drugs, especially biologics, rather than traveling to physicians’ offices or infusion centers. Also, BD Medical’s Lynch added that the “retailization of immunization,” a growing trend where people are being vaccinated outside of traditional medical settings such as pharmacies, schools, retail outlets, and even airport kiosks, is driving the prefilled market. He said, “Because many other people besides healthcare professionals are administering vaccines, prefilled syringes offer a simple, convenient, and efficient way to meet burgeoning patient demand.”

The Advantages To Drugmakers

While prefilled syringes offer many advantages to end users, they also offer a variety of benefits to drugmakers. First, according to Jonathan Arnold, VP and general manager of sterile technologies at Catalent Pharma Solutions, prefilled syringes usually offer drugmakers lower overall cost-per-dosage-unit as compared with syringe and vial formats. This is because prefilled syringes contain an exact amount of drug to be delivered whereas vials are typically overfilled 10% to 25% to account for any drug that may be lost during injection preparation and administration. To that point, Mahesh Chaubal, senior director of drug development at Baxter BioPharma Solutions, said, “Elimination of vial overfills can result in substantial cost savings, especially for biologics manufacturers whose products are very expensive to produce.”

Second, Cook Pharmica’s Jacobs offered that from a logistical and supply chain management perspective, prefilled syringes are easier to handle, store, and ship than vials. She explained that prefilled syringes weigh less and take up less space than vials, so they cost less to ship. She added, “Prefills occupy less shelf space at distributors and pharmacies, which makes them easier to store than vials, which can also help to reduce costs.”

Finally, prefilled syringes can help drug manufacturers with brand differentiation and life cycle management for their products. For example, according to Kiang, many biotechnology companies typically launch new products in a standard vialand- syringe format and switch to prefills for second generation products to better differentiate themselves (because of ease-of-use) from competitors. Also, Baxter’s Chaubal added “Prefilled syringes offer biopharma companies more flexibility for brand differentiation and lifecycle management of their products.”

The Challenges Of Manufacturing Prefilled Syringes

Because of the plunger-barrel design of prefilled syringes, syringe barrels must be coated with silicone to ensure sufficient glide force for the plunger to easily deliver a drug during injection. Storage of proteins in silicone-coated prefilled syringes can sometimes result in silicone leaching into the product. Also, protein-based drugs (especially those formulated at low or high pH) can leach or extract contaminants from prefilled syringe rubber stoppers. To overcome these challenges, many syringe manufacturers developed new silicone coating techniques and specialized silicones to reduce the likelihood of silicon leaching. Moreover, Patheon’s Pidgeon and Baxter’s Chaubal suggested that some of the extractable concerns with prefilled syringes might be overcome by replacing rubber stoppers with less chemically-reactive substances like Teflon.

While glass remains the industry standard for prefilled syringes, there have been recent concerns over pharmaceutical glass quality and the possibility of delamination — a process (especially at lower pH) in which microscopic shards of glass can be shed into solution over time. These concerns have led to the development of cyclic olefin polymers and copolymers (e.g. COC, COP, and CZ) that are “glasslike” in appearance; have low extractable, leachable, and protein surface adsorption properties; and are stable over wide pH ranges. While plastic prefills may help to reduce drug manufacturers’ anxiety about breakage and delamination, their higher cost may hinder adoption.

“There is a perception out there that it costs more to deliver biologics or a vaccine in a prefilled syringe,” said Lynch of BD Medical-Pharmaceutical Systems. “However, recent studies show that when you compare the administrative, personnel, and ancillary costs typically associated with administration of biologics and vaccines using a conventional vial-and-syringe system, prefills offer real cost advantages and savings.” In fact, she, as well as Catalent’s Arnold, offered that several time/motion studies conducted at Johns Hopkins and other academic institutions showed that flu vaccination with prefills offered substantial cost savings over conventional vial-and-syringe administration.

Autoinjectors, Needleless Devices, And Other Innovations

Autoinjectors, spring-loaded glass syringes that keep needle tips shielded or hidden prior to injection, are becoming increasingly popular for patients who self-administer injectable drugs. These devices offer patients who self administer a “one-click solution” — pressing a button releases the needle, which is inserted a predefined depth into the skin, and the drug is subsequently delivered.

Paul Whyte, CEO of United Kingdom-based Future Injection Technologies, believes that autoinjectors will become the optimal choice for self-administering patients suffering from chronic diseases like rheumatoid arthritis (RA). He said, “Many patients with RA simply lack the manual dexterity or hand strength to use conventional prefilled syringes to self-administer. Autoinjectors are ideal for these patient populations.”

Needleless injectors were initially designed to overcome “needle phobia” and the hesitation commonly associated with injection via needle-based systems. While several different needleless devices have been developed over the years, they are not widely used because many patients report that injections with these devices are more painful and sometimes cause more injection site injury than those administered with needles. Nevertheless, development of a safe and effective needleless device still represents something of a “holy grail” for the syringe manufacturing industry.

Finally, as previously mentioned, the standard plunger-barrel design of commercially available syringes continues to present many challenges (e.g. drug stability, shelf life, leachables, extractables, and rising costs) for drugmakers that want to offer their products in a prefilled syringe format. To attempt to overcome these challenges, Artemes Technologies, a Boston-based medical technology start-up is developing a plungerless injection system that uses magnetic principles to dispense medication/fluids from uniquely constructed disposable, single-use sealed cartridges. Boris Zubry, an Artemes cofounder and inventor of the device, offered, “Magneticallypropelled fluid delivery is currently used in many industrial applications. By applying these principles to a new syringe technology, we can remove the plunger from the syringe design and thereby eliminate the multiple negative issues of the barrel-plunger system altogether.” Further, Michael Dudley, Artemes’ CEO added, “Sealed cartridges can help to dramatically increase product shelf life and better contain the escalating manufacturing, shipping, and storage costs commonly associated with most conventional prefilled syringe formats.”

Despite the commercial availability of a plethora of prefilled syringe design options, many syringe manufacturers and drug delivery experts believe there is still plenty of room for innovation in the prefilled syringe market. For example, Catalent’s Arnold thinks that microneedle transdermal patches and needleless autoinjectors may represent promising areas of innovation. However, for the foreseeable future, it appears that conventional prefilled syringe formats will remain the method of choice for self-administer biologics and other parenteral drugs.