Under Mazumdar-Shaw’s stewardship, Biocon evolved from its humble beginnings in 1978 as an industrial enzyme manufacturing company into one of the most recognized biotechnology companies in Asia. During her tenure at Biocon, she created two subsidiaries: Syngene (1994), that supplies contract development support services for discovery research, and Clinigene (2000), that caters to companies interested in clinical drug development. To date, she is one of the only women in the world to control and lead a publicly traded biotechnology company.

Named among Time magazine’s 100 most influential people in the world, Mazumdar-Shaw is frequently credited with launching India’s emerging biotechnology industry.

Despite her hectic schedule, she sat down with me during a recent visit to New York City to discuss Biocon, the challenges of doing business in India, and the emergence of India as a contender on the world’s life sciences stage.

Q: How did you manage to build Biocon into one of Asia’s leading biotechnology companies? 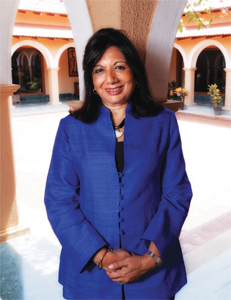 Mazumdar-Shaw: As you may imagine, India was a very different country in 1978 as compared with today. At that time, India was underdeveloped, financially challenged, and overly bureaucratic. And starting a business (especially a joint venture with a foreign company) was extremely difficult because India was going through a nationalistic phase.

At age 25, I started Biocon India with roughly $1,000 (10,000 rupees) I had earned and saved. I retained 70 percent ownership of the company because foreigners, according to Indian regulations at the time, could only own up to 30 percent of a joint venture. Not surprisingly, in the late 1970s, there was no venture funding in India, and new businesses depended upon high interest debt funding to start up operations.

After talking with countless numbers of Indian bankers — most did not want to give money to a young woman with no business experience in an industry they had never heard of — I was able to convince one to give me a small line of credit to start up operations. I rented space in an industrial part of Bangalore and used my garage as an office to conduct business.

Biocon India’s plan was to produce industrial-scale enzymes for beer, wine, paper, animal feeds, and detergents, and by the late 1980s we were profitable. In 1989, Unilever bought out the 30 percent stake in Biocon India that was owned by my Irish partners. This was a very transformative period for Biocon because Unilever’s multinational business model forced me to conform to global best practices, which, to this day, continue to differentiate Biocon from most other Indian life sciences companies. It is our commitment to global best practices that enables us to maintain our status as a world-class biotechnology company.

By the late 1990s, I decided Biocon’s enzyme business was a self-limiting one. Biocon was profitable, and things were going great, but I realized that remaining in the enzyme business would not provide me with the exponential growth I was looking for. Consequently, I turned my attention to biopharmaceuticals, which I believed was a good business opportunity for Biocon given our expertise in recombinant DNA technology and bacterial and fungal fermentations. Interestingly, Unilever had no interest in pursuing biopharmaceutical drug discovery, and in 1998, my husband, John Shaw, and I bought Unilever’s share of Biocon India and became fully independent. 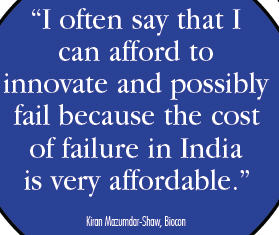 After the buyout, we were able to transform our enzyme business into biopharmaceuticals by leveraging our proprietary fermentation platforms and recombinant DNA technologies into statin and insulin production. However, I realized there was one technology platform that was missing — monoclonal antibody (mAb) production. Biocon acquired that capability in 2001 by in-licensing Cuban mAb production technology and bringing it to India. This gave Biocon its foundation in biopharmaceuticals.

In 2004, we took Biocon public (India’s first publicly traded biotech company) and decided in 2007 to sell the company’s enzyme business to Novozymes A/S of Denmark. Prior to going public, all of Biocon’s manufacturing and R&D activities were selffinanced. Getting listed on the Indian markets helped Biocon to become a fully integrated biopharmaceutical company, which today is one of Asia’s largest mAb and biologics manufacturing facilities.

Q: What are some of the important lessons you learned during your 35-year tenure as a biotechnology executive?

Mazumdar-Shaw: I think taking risks and managing them successfully is my main strength and one of the main ingredients responsible for my success in the biotech industry. Also, I am passionate about innovation, which helps to differentiate a successful company from an unsuccessful one. Innovation is something that cannot be taught; it must be in one’s DNA. And a strong innovative spirit is critical for positive leadership. Also, throughout my career, I have surrounded myself with others who share this innovative spirit and are willing to take risks with me. Of course, as an organization grows larger, the ability to take risks decreases because much more is at stake. However, I continue to promote risk-taking at Biocon, and we are very aggressive both scientifically and in execution of our IP and patent strategy.

Finally, I believe investment in R&D is going to yield huge value for Biocon, and we are going to continue to pursue that path. For example, Biocon is currently developing two innovative products we are very excited about: oral insulin (partnered with Bristol-Myers Squibb for clinical development), and an anti-CD6 monoclonal antibody (itolizumab) recently approved in India to treat autoimmune diseases like psoriasis, rheumatoid arthritis, multiple sclerosis, and inflammatory bowel disease. The next step for itolizumab is to develop and get it approved (by partnering with a larger company) in the U.S. as a treatment for certain autoimmune disease indications.

Q: Do you think Indian drug manufacturers are ready to compete in the innovative drug discovery and development space?

India offers the world an affordable platform for cost-effective drug innovation. I often say that I can afford to innovate and possibly fail because the cost of failure in India is very affordable. When other biopharma entrepreneurs realize this, I believe there will be an innovation explosion in India.

While many Big Pharma and biotech companies are getting out of R&D because “innovation is too expensive,” India offers a unique opportunity to show the rest of the world that affordable innovation is possible and can help to deliver much-needed new drugs to address unmet medical needs.

Q: What are your views on the future of the global biosimilar market?

Mazumdar-Shaw: I believe biosimilars are the future, but they will go through a painful period of slow acceptance over the next 10 years or so. But it is only a matter of time before biosimilar products will penetrate global markets as aggressively as small-molecule generics have in recent years. This is because national healthcare systems must seriously begin to address the escalating costs of prescription drugs. However, unlike generic small-molecule drugs, biosimilars face many tough challenges. 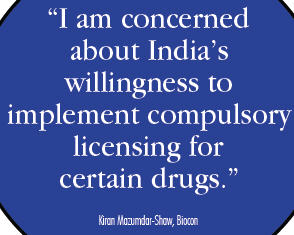 Another big challenge is physician education. Until physicians are clearly convinced of the safety and efficacy of biosimilars, they are unlikely to prescribe them to patients. Physicians need to be convinced of the quality of a biosimilar as compared with its branded counterpart.

Perhaps one of the greatest challenges for biosimilars will be whether or not these molecules are substitutable or interchangeable with innovator products. While this is still a very contentious and a hotly debated topic, I believe biosimilars will ultimately be interchangeable or substituted for branded products and become part of standard medical practice in the future.

Another challenge is one of development cost. Current guidelines mandate extensive comparative clinical studies, often larger in size than the innovator drug. It is imperative regulators evolve an abbreviated path that shrinks both the size and timeline to commercialize biosimilar drugs, or else the objective of affordability will not be met.

Finally, biosimilar products are already quite prevalent in many emerging markets. However, unlike the past, the countries that represent these markets are aggressively establishing regulatory guidelines for development and approval of biosimilar products. To that end, we recently submitted draft biosimilar guidance to the Indian regulatory authority that includes mandatory comparator clinical trials for approval of biosimilars in India. Our goal is to ensure biosimilars manufactured in India are safe, efficacious, and of high quality.

Q: What are some of the major challenges foreign drug makers must overcome to successfully compete in the Indian life sciences market?

Mazumdar-Shaw: One of the most challenging aspects of the Indian pharmaceutical market is drug pricing. Most of the drugs being developed by Western companies will simply be too expensive to sell on the Indian market. This is forcing many multinational companies to consider dual pricing and branding strategies; that is, they offer a lower price for India and other emerging markets as compared with the rest of the world. While the sheer size of the Indian market suggests this may be a viable strategy going forward, many multinational pharmaceutical companies are still weighing their pricing-strategy options.

Fragmentation of Indian supply and drug distribution chains is another huge challenge for foreign drug makers. For example, every state in India has a different set of regulations for drug distribution. Also, the current system literally supports hundreds of thousands of pharmacies and physicians with different local and regional needs. The Indian market is extremely complex and the one-size-fits-all drug distribution model favored by Western drug companies would be impossible to implement in India.

Finally, penetration of the different markets that exist in India is also extremely challenging. For example, the needs, infrastructure, and dynamics of Indian urban markets are very different from those of the semi-urban markets, which are again markedly different from those of rural Indian markets. To be successful, foreign drug companies must understand and embrace the differences of these markets and determine the best way forward for each of them.

Q: What are your thoughts on the recent patent rulings that many multinational pharma and biotech companies claim are making it increasingly difficult for foreign companies to compete in India?

Mazumdar-Shaw: The Indian government has been very clear from the beginning that it will not accept “evergreening” of patents. The recent Indian court decision not to honor Novartis’ Gleevec patent extension, in my opinion, was a clear example of evergreening. So the decision not to honor the Gleevec patent was consistent with previous court opinions and its stated intentions. I am concerned about India’s willingness to implement compulsory licensing for certain drugs. IP is vital for innovation, and the Indian government must respect it (and protect it) if it wants India to play on the world life sciences stage.

In addition, the Indian government has completely abdicated its responsibility for providing access to potentially life-saving drugs for patients; in India everyone pays out-ofpocket for their drugs. The government should be buying these drugs at negotiated discounted prices and providing them to patients. Instead, Indian companies are looking for loopholes in trade agreements to induce the government to declare compulsory licensing for certain drugs. I think this approach is wrong-headed because the quantities of “cheap” drugs that will actually be sold in India will be quite small, and India’s reputation as a place where IP is protected and innovation can take place will be seriously damaged globally.

Unfortunately, the Indian government continues to attempt to protect its generic drug industry and, in my opinion, needs to be much more respectful of IP. If the Indian government continues to refuse to respect IP, then it is very likely that multinational drug companies will not choose to launch new products in India, which could have very devastating healthcare consequences for its people. As far as I am concerned, India should respect IP, encourage innovation, and negotiate drug pricing from a position of strength, not weakness.