Renewed Focus On Prevention Is Necessary To Improve Population Well Being

Will 2020 be the year when public and political discourse anchors healthcare policy in fact-based epidemiology? Will it be the year when the ways in which healthcare policies are shaped address the root causes of illness? Could it be the year when policy gets based on a ruthless examination of past learnings (what works/what does not), the present (whether current programs drive or detract from national health), and the future (how science, technology, and behavioral science can be leveraged to affordably combat onset and cure of disease)? Lower prevalence of disease defines well-being. Moving from sick care to healthcare means focusing beyond the cure on prevention and abatement of disease. This has been the basis for vaccination programs from infancy through later years. A greater focus to influence and embed a healthier lifestyle is required now — what we eat and drink and how we move and rest impact well-being more than anything else. After all, how long can the U.S. afford the current trajectory of illness and healthcare outcomes?

FACE REALITY: ILLNESS IS RAMPANT IN THE U.S., AND OUTCOMES SHOW LITTLE PROGRESS!

Six out of 10 adults in U.S. have a chronic disease and four in 10 have two or more. These patients account for 90 percent of all healthcare spending. Approximately, 122 million have cardiovascular disease that results in 840,000 annual deaths. Nearly 30 million Americans have diabetes, and another 84 million are prediabetic, a ticking time bomb — but one that can be alleviated with the right efforts. In 2016, the direct and indirect cost of chronic disease that was influenced by obesity was $1.72 trillion, i.e., 9.3 percent of the GDP. The latest National Health and Nutrition Examination Survey (NHANES) states that 40 percent of adults and 19 percent of children between ages 2 and 19 are obese — the highest ever recorded in their survey.

Nutrition, physical activity, mental health, and substance abuse disorders are key causal factors of our chronic diseases and must be targeted as part of any public health policy that aims to arrest the trajectory of disease and improve population well-being.

Ironically, when interests of people collide with those of corporations, the latter invariably prevails as evidenced by recent examples of U.S.-led policy interventions. 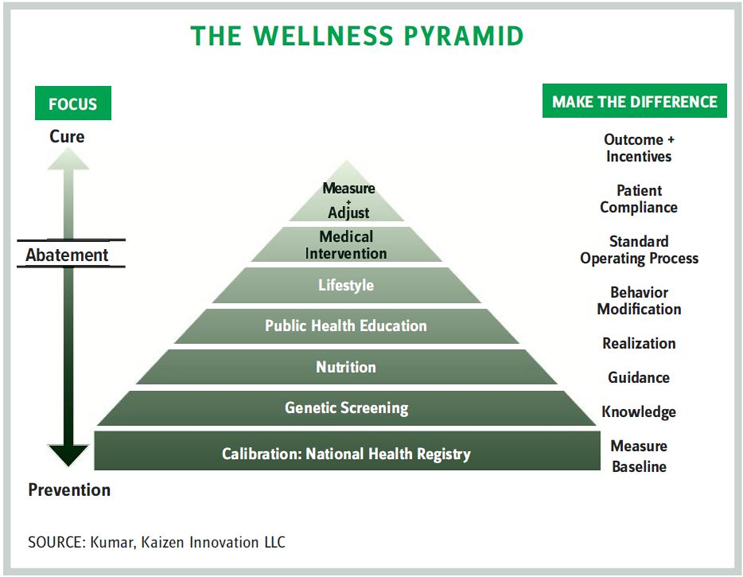 THE JOURNEY FROM SICKNESS TO WELLNESS

Healthcare is multifaceted, and we all know that governments influence how people and businesses behave. Individual behaviors such as eating, drinking, exercise, and sleep habits all impact public health. Regulations shape corporate behavior. Similarly, the public’s health, safety, and well-being are impacted by the transparency associated with a product’s contents, price, and risks associated with its use. Policy stewardship shines a spotlight on people and patients, works for the common good first, and — notwithstanding the administration’s recent performance — addresses commercial interests next.

The goal of progressive public health policies is to transition populations from sickness to wellness by aiming to:

Regressing the trajectory of disease will encompass:

a. healthy eating and drinking
b. physical fitness, exercise, and getting America to move at home, at school, and at work.
c. mental well-being, determining and reducing stress levels of our society
d. calibrating how rested or agitated we are. While this is complex, technology enables measuring one marker — sleep
e. determining the trajectory and causes of substance abuse and stress torque in a society
f. establishing if screen and typing time pose addiction risk (the ubiquity of mobile phones and technology warrants better understanding of risks such as blue light and vison, time on keyboards, and carpal tunnel syndrome).

THE ROAD MAP TO REALITY

A good journey begins with questions to identify a destination and build an itinerary. You be the judge: Are our public health policy initiatives appropriate, effective, and affordable? Are they in sync with our demographic and epidemiological trends? Can they bend the trajectory of disease and the healthcare cost curve?

SURESH KUMAR serves on the board of Jubilant Pharmaceuticals and Medocity. Formerly, he was U.S. assistant secretary of commerce and executive VP at Sanofi.