With pressure from the White House, Chairman Chuck Grassley’s (R-IA) Senate Finance Committee remarkably advanced a bill that inserts price controls into the market-based Medicare Part D program while restructuring the program’s mechanics. It also dramatically modifies the Part B buy-bill system and takes over $100 billion out of the pharmaceutical industry during the next 10 years. The 19-9 vote was composed of only six out 15 Republicans to send the bill to the full Senate for consideration.

An amendment by Senator Pat Toomey (R-PA) to strip the CPI-U price control failed on a tie vote of 14-14 with Chairman Grassley and Senator Bill Cassidy (R-LA) joining all Democrats except Senator Bob Menendez (D-NJ) to uphold the provision.

It is hard to understand why the finance committee felt compelled to begin unravelling the very successful market-based program with costs that have not increased in three years and were 45 percent below initial projections in the first decade of operation. It’s also a program with premiums that have remained stable for over a decade, actually declining for the last three consecutive years.

Misleading and inaccurate statements by certain “conservative” commentators as well as the director of the Congressional Budget Office (CBO) fueled member confusion.

In his opening statement, Chairman Grassley dismissed the notion that he was advancing price controls and inserted into the record Avik Roy’s recent Forbes article which stated, “The go-to argument for the drug lobby is that limiting government subsidy growth to inflation is a ‘price control.’ But it’s nothing of the sort, as subsidies are not prices.”

No one is arguing that enacting price controls in Medicare Part D means they would be applicable in nongovernment commercial contracts. But requiring rebates for price increases that exceed an arbitrary index obviously is a price control in Medicare. This policy is akin to the administered pricing system that governs other sectors in Medicare — hospitals, physicians, and so on — the costs of which are currently bankrupting the program. 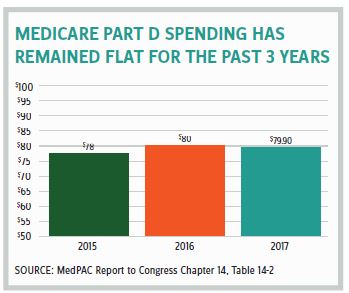 CBO Director Phillip Swagel further convoluted matters by misinforming senators that lack of competition in “protected classes” results in “a lack of power on the part of the insurers to hold down costs.”  Apparently, the CBO is not aware that five of the six protected classes — antipsychotics, antidepressants, immunosuppressants, antineoplastics, and anticonvulsants — have a higher overall rate of generic utilization than other drug classes (92 percent vs. 84 percent of prescriptions), according to Pew Charitable Trusts. There is more competition in protected classes than elsewhere!

WHAT IS THE IMPACT OF THE FINANCE PACKAGE ON PATIENTS?

About 1 percent of beneficiaries with very high costs in out-of-pocket spending and who do not qualify for extra assistance provided to those with incomes up to 135 percent of poverty will see their 5 percent coinsurance eliminated. That will certainly benefit those patients taking very expensive drugs.

But most other seniors and disabled Americans will see little change to their out-of-pocket costs when they fill their prescriptions at the pharmacy counter. That is because the current 25 percent coinsurance in the initial phase of the benefit remains unchanged and because there is no provision to require plans to pass on PBM-negotiated manufacturer rebates to patients at the point of sale. The administration pulled back that proposed rule change, and no provision in the bill would provide that needed reform. As a consequence, the impact to most seniors will be quite limited.

Such a bill will not result in the political payoff the Trump administration, members of Congress, and even the industry itself want of showing appreciable progress in reducing patients’ drug costs when they fill their prescriptions.

It is now up to Senate Majority Leader Mitch McConnell (R-KY) whether and when to bring the finance bill up for floor consideration. He will be dealing with a fractured Republican Caucus, including a majority of whom voted against the bill in committee. He may choose to make key changes to the bill through a manager’s amendment or open the bill to floor amendments to allow the Senate to work its will.

One idea gaining attention is to spread the manufacturer contribution across the entire benefit and use it to “buy-down” patient coinsurance from 25 to 20 percent. That approach would reduce a typical copay on a $200 drug from $50 to $40 and help nearly all beneficiaries with modest or even high costs. Such a policy would both improve drug adherence and provide meaningful relief to seniors.

Leader McConnell may choose to wait to see how the Democratically controlled House proceeds. The Energy and Commerce and Ways and Means committees have not reached consensus on a unified product and are also feeling pressure from Speaker Nancy Pelosi and House progressives to advance radical ideas, such as government negotiation, compulsory licensing, and binding arbitration for as many as 250 high-priced drugs. It remains unclear whether the Democratic majority will work with House Republicans on these issues of greater magnitude as it did on less controversial issues regarding IP reform and transparency, or if it will adopt a partisan approach.

Meanwhile, the Trump administration may release its proposed rule on the International Price Index that would implement foreign reference prices in Medicare Part B as early as this month. And it just announced another fusillade against the industry that it is preparing a proposal that permits reimportation of certain drugs from Canada.

Most Democrats never supported market-based delivery in Medicare Part D. The Trump administration appears to want a bill-signing ceremony on prescription drugs and is less concerned about the policy details in that bill.

That leaves it to congressional Republicans to ensure that the market-based experiment in healthcare known as Medicare Part D be protected. The CPI-U price control provision was reportedly demanded by ranking member Ron Wyden (D-OR) as the condition for Democrat support for the package. Its real purpose may be to facilitate the dynamic the Democrats really want: control over launch prices of new products. The distortionary implications of the price controls combined with the 20 percent mandatory rebate for expensive drugs in the catastrophic phase are hard to predict, and certainly new ground-breaking products are likely to be expensive in any case.

Another provision of the bill requires manufacturers to justify launch prices that exceed $10,000 for a course of therapy in a year and may require them to provide specific information regarding R&D costs, revenue and net profit, and a host of other variables for specific drugs. That is no coincidence!

Republicans should not take the bait by setting up a scenario that will allow some future government price-review board to determine who gets what, when, and how! There is no reason to dismantle the market-based model that is working, particularly when the proposed reforms do so little to actually assist patients. Congress should modernize the benefit with a focus on mitigating distortions that have arisen over time that increase a patient’s out-of-pocket costs. That can be done by embracing market mechanisms, not abandoning them.