While it is understandable why many members of Congress fear crossing their ideological base, it is high time for Republicans and Democrats alike to disregard ideological rigidity and come together on reasonable and modest reforms that can strengthen the health system and bring greater efficiencies.

For decades, when Republican leadership constructed legislation, attention was focused on maintaining support of moderate Republican members, often in Democratic-leaning suburban districts. But three recent developments gave impetus to the conservative base driving negotiations and legislation within the caucus:

Republicans are now more concerned about a primary challenge from their base than a Democratic challenge from the center/left. The primary defeat of prominent main-street Republicans such as Senator Bennett (R-UT), Rep. Castle (R-DE), and Rep. Stearns (R-FL), among others, struck fear in a number of Republicans and now drives their decision making on many matters, but healthcare above all else.

This explains why the Republican House leadership was forced to scuttle a modest bill that would have removed funds from an Obamacare slush fund in order to finance high-risk pools for uninsurable individuals, another Obamacare initiative that had run out of money because too many sick people signed up. The bill was a clever initiative because it simultaneously 1) defunded a slush fund for prevention that Secretary Sebelius was tapping to establish federal health exchanges in those states refusing to set up their own exchanges and 2) addressed a real policy problem with Obamacare, which had low-balled the resources it would take to provide assistance to uninsurable individuals through high-risk pools — a policy proposal Republicans had embraced for years.

The Club for Growth and Heritage Action — two notorious conservative groups known to drop tens of millions of dollars on Republicans they find not conservative enough, or “RINOs” (Republicans in name only) as they dub them — sprang into action. They issued alerts to their members and threatened retribution to any Republican who supported Majority Leader Cantor’s bill on the issue. The bill also drew the ire of AARP and several left-leaning groups, so bipartisan consensus could not be achieved, and a floor vote has been indefinitely delayed.

The issue is endemic of a larger problem that Republicans confront in approaching health policy. There is a substantial faction of the Republican party and the base that would like to either repeal Obamacare in its entirety or require the entire statute be implemented precisely as written and watch with glee as the Democrats’ law fails to deliver half of its promises at twice the cost. Two score and counting repeal votes in the House have been unsuccessful in getting the Democrat-controlled Senate to move.

Now Tea Party activists Senators Ted Cruz (R-TX) and Mike Lee (R-UT) are demanding that Congress defund Obamacare this fall when it votes on the appropriations bills that fund the federal government. Even if that bill passed the Senate with some Democrat support, it would be vetoed by President Obama and a 2/3 majority from both chambers would be required to override. They simply don’t have the votes, and bringing the government to the brink on an issue that has been settled by the Supreme Court and the 2012 election makes no sense.

What Should Congress Focus on This Fall?
The Obama administration is scrambling to implement the greatest change to healthcare policy in the history of the country, but by all indications, it will not be ready, and chaos will roil the health sector. 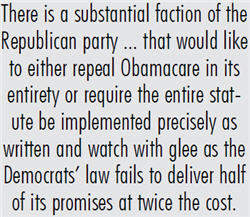 Meanwhile, in a glimmer of hope to end the paralysis, the Energy & Commerce Committee came together this summer and reported out a bipartisan bill to repeal the flawed Medicare physician payment formula, the “SGR.” That formula has been overridden more than 15 times in the past 10 years in stop-gap fashion where Congress kicked the can down the road without finding a permanent solution to the pending 25% payment cuts or reforming a fee-for-service system that rewards volume instead of quality.

It would be a real achievement to permanently repeal this unworkable formula and set the system on a path focused on patient outcomes. But how is Congress going to find the $140 billion to $160 billion necessary to fund this change over the 10-year budget window? That’s where bipartisan consensus is likely to break down.

A little-discussed option would be to delay implementation of Obamacare spending for one year.