About 80% of drug candidates fail in phase 2 trials because they don’t reach endpoints for efficacy. Of those drugs that get FDA approval, little is known about possible applications outside the narrow science of their original indication. Repurposing marketed drugs or rescuing compounds that failed in clinical trials offers entrepreneurs the potential to replenish pipelines with reduced risk and time in drug development. Yet these potential advantages may be moot if one can’t overcome the main barrier of repurposing — intellectual property exclusivity. 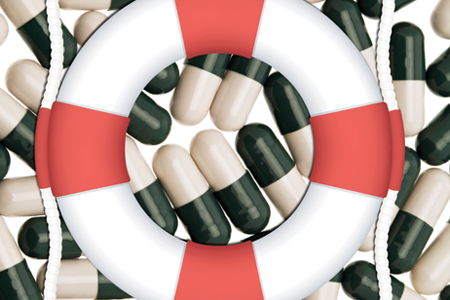 Seth Lederman, M.D., co-founder, president, and chairman of TONIX Pharmaceuticals, says the risk of abandoning repurposing projects is lower than trials with new chemical entities (NCEs). “Looking back at the past 15 years,” he says, “there’s been a credo in early-stage research, ‘fail fast.’ You don’t want to end up in late-stage trials and fail. It’s just too expensive.” He feels this led to a bias toward early discontinuance of trials with NCEs that might have succeeded otherwise.

With repurposing, research starts with defined pharmacokinetic (PK) data and a compound already proven safe through possibly millions of human exposures. If an apparent safety issue arises, investigators are more likely to approach it as an anomaly rather than to consider dropping the project. TONIX is developing the muscle relaxant cyclobenzaprine (CBP) in a sublingual form (CBP SL) for use in fibromyalgia and post-traumatic stress disorder (PTSD). Lederman says, “Even if a toxicity signal arises in an animal model during our research, we wouldn’t be discouraged. We can’t shrug it off; you have to take every piece of data seriously; but we may go and test in two other species.”

A company may shave years off R&D by repurposing, and the savings can affect the strategic positioning of the compound. A new drug application (NDA) can be submitted under the 505(b)2 provision. This allows a company to support its application using the existing safety and PK data the FDA sanctioned for the drug in its original indication. Lederman says, “It’s hard to say, but I think the provision helped TNX-102 SL (CBP SL) shorten R&D by as much as five years because we were able to go directly to dose finding.” Michael Coffee, chief business officer of MediciNova Pharmaceuticals, says having the pharmacokinetic and safety data saved a year or two of research repurposing the anti-asthmatic ibudilast for chronic neuropathic pain and drug dependency. He says, “These advantages can move a project’s priority up significantly when you’re looking at six or seven potential projects you could invest in.”

Making The Discovery
Historically, new uses for existing drugs were found by practitioners observing patient reactions to medications and linking those observations to an unmet need. TONIX is advancing the research of Dr. Iredell Iglehart, who noticed CBP had a positive effect on his fibromyalgia patients. Lederman says, “This kind of practice: a careful doctor, making a clinical observation, and then expanding on it, I think really goes back to Edward Jenner and cowpox. But, it is not necessarily reproducible in a systematic way.”

Advances in science and technology now make systematic approaches feasible. Using high-throughput technology, like phenotypic drug screening, investigators can screen libraries of compounds against banks of cellular assays to uncover potential therapeutic links. Millions of assays can be tested, and the results reported within days, that might have taken months or years to find by manual laboratory methods.

Eli Lilly’s proprietary phenotypic drug discovery system (PD2) screens human cells with a known diseaserelated biology or defect against a battery of compounds to see if there is a therapeutically positive change in the cell. Ash Bahl, Ph.D., Lilly’s senior director of global external R&D, says, “With phenotypic screening we see the positive effect (phenotype) but may not know what caused the change. It tells us we’re chasing something of value, and then we use the technology to deconvolute the disease signal and work backward from it.

The Internet provides researchers the technology to access and screen knowledge worldwide, often with surprising results. Kirk Johnson, Ph.D., chief scientific officer at MediciNova, and his collaborators were researching the role of glial cells in chronic neuropathic pain. He found that the cytokine interleukin-10 (IL- 10) acted on glia in a way that reduced chronic pain, but IL-10 had to be injected intrathecally to be effective. Johnson wanted to find a more patient-friendly alternative. His team conducted a painstaking literature search screening for studies of oral agents that reported effects on glia similar to IL-10. They found ibudilast, an oral medication available in Japan for 20 years.

To assist researchers in the discovery process and speed translational research, NIH created the National Center for Advancing Translational Sciences (NCATS) in late 2011. NCATS director Christopher Austin, M.D., says, “The center was created to speed new therapies to patients by reducing or eliminating bottlenecks in the translational research pipeline.” He characterizes NCATS as something of a cross between a matchmaker and a catalyst among academia, pharma, and patient advocacy groups. NCATS has the resources to assist with the identification of potential compounds and support research and the connections to foster collaborations among its constituents. Austin says, “Investigators, patient groups, or the industry can approach us looking for links, and we can match them with partners.”

Intellectual Property Exclusivity: The 900-Pound Gorilla For Investor Funding
“Ninety percent of FDA-approved drugs are off patent, and there’s no good way to commercialize them,” says Austin. He cites the example of auranofin, an anti-arthritic. NCATS screening found a potential positive therapeutic connection between auranofin and chronic lymphocytic leukemia, but auranofin is off patent. “Here we have a therapy with apparent efficacy for a serious disease in its current dosage that costs pennies a day, and we have no way to fund a phase 3 trial. We’re looking for a solution to this sort of situation.”

Finding an existing drug that meets an important unmet medical need is half the equation. Coffee says, “You need both a scientific case and a business case to proceed viably.” For survival in a for-profit enterprise, establishing exclusivity is equally important as proving a medical theory. “While our scientists were researching the scientific case for ibudilast, we were very careful and thoughtful about laying down a strategy for intellectual property. We got five years exclusivity under Hatch-Waxman and developed strong method-of-use patents for ibudilast, in some cases out to 2030.”

Funding is not always easy, even with known compounds. Lederman says, “Two problems right now are that investors are impatient and risk averse. Even Big Pharma is too impatient to wait for an NCE.” Repurposing lowers these obstacles, but the major challenge is convincing investors that repurposed products can get exclusivity.

Grants can be an important source of funding. The NIH is the largest grantor, but patient advocacy groups are playing a larger role, particularly in small-market drugs for rare or neglected diseases. They are more interested in outcomes than profitability. Nonprofits, such as the Nicholas Connor Institute and CureDuchenne, have been able to focus financial resources on translational research that might not normally receive commercial support.

Rescue Opportunities With Big Pharma And NCATS
In 2011, the NIH held a roundtable with industry experts to discuss rescue and repurposing drugs. The question was asked, “Are there drugs that failed to show benefit in their primary indication that could be used for other diseases?”

NCATS responded to the question by collaborating with eight pharma companies in a pilot program called “Discovering New Therapeutic Uses for Existing Drugs.” NCATS is providing funding, peer review, and research data for the project. The eight companies are offering 58 high-quality compounds to academia for further development. “These drugs have been proven safe but ineffective,” says Austin. The compounds have undergone extensive preclinical, and in some cases, Phase 1, studies. Austin says these products are like a football that’s been carried to the five-yard line and just needs a new offense to get it across the goal line.

Lilly is collaborating in the project by providing compounds and screening compounds with PD2. Bahl says, “It’s apparent that our compounds may have applications in therapeutic areas outside our strategic areas of expertise.” These compounds did not meet their original hypothesis, but they may have an application in an as yet unknown area, or they have shown promise in an area outside Lilly’s focus or expertise. Bahl says, “We felt it was very important to offer quality products to the project that have at least 10 years of patent life left.”

If a researcher’s proposal is selected to study a compound in the project, the pharma companies involved will supply the clinical materials and all the data on the compound an investigator will need to file an NDA. Any new IP developed by the academic is theirs. The company will retain the original patent on the compound and the original-use IP. The academic and the company may then collaborate to develop and market the product. Bahl says, “It’s about collaboration and new science, but it’s also about Big Pharma saying, ‘We’re not here to own everything.’”

Researchers may decide to collaborate directly with drug companies. Lilly has extended an open invitation to investigators to use PD2 to research possible therapeutic activity between compounds and cellular assays for diseases. Any discoveries belong to the investigator. They may choose to work independently, but Lilly invites investigators to collaborate with the company to develop the compound for clinical trials. Bahl says, “For discoveries in our own areas of expertise, we would pursue the collaboration ourselves. For discoveries on the fringes of what we’d do internally, we could enable small, project-focused companies sponsored by either venture capital or a public-private organization like NCATS.”

Be Observant, Be Curious
For repurposing, Coffee says, “There are two words of advice — be curious. Read, listen, talk to people, and be aware of nuances,” he says, “There is serendipity, but it’s a kind of mosaic. You need to be observant and put the pieces together.”

Lederman agrees. “Be observant,” he concludes. “As general advice, if you work on medically important problems, and you can add value from a medical and managed care point of view, you will be richly rewarded.”