A few weeks ago, Novartis became the latest Big Pharma company to depart the antibacterial field, joining Allergan and The Medicines Company, both of which — even though they manufacture the leading critical-need products — have soured on the lousy returns related to this therapeutic area. Sanofi even paid for another group to take their deep pipeline. Several other top-10 companies, including AstraZeneca, Johnson & Johnson, Eli Lilly, and Bristol Myers, threw in the towel a couple of years ago.

“The pullback revives concern about a world in which routine infections again become lethal as bugs develop resistance to existing drugs. Sales of new antibiotics are too low for Big Pharma to recoup its investments, and public measures to encourage more activity aren’t moving the needle,” lamented Business Day.

Duke University’s Margolis Center observed that only five of 16 brand-name antimicrobials approved since 2000 were able to generate sales of more than $100 million annually, and only when prescribed for outpatient use where reimbursement is better.

The market challenge for antibiotics is that there is a public health mandate to keep novel products in reserve as a last-in-line option in order to maintain their clinical utility and limit the development of resistance, and when they are used, it is for a discrete period of time, typically a week or two. Finally, reimbursement in inpatient settings is limited as antibiotics are paid under predetermined bundled payments where strong downward generic-pricing pressure exists.

Dr. John Rex, the former head of AstraZeneca’s infectious disease unit, analogized that “Antibiotics are the fire extinguishers of modern medicine. But, we don’t pay for fire extinguishers only when we use them — indeed, we much prefer to admire them and NOT use them, except in the knowledge that they are available.”

While the marketplace has failed, antimicrobial resistance (AMR) is, unfortunately, rocking. Leading U.K. government and World Health Organization data shows that the cost in lives from AMR over the next 40 years could go as high as 10 million per year; the cost to economic development could soar to as high as $3 trillion per year if current trends continue.

In the United States, 2 million people get serious antibiotic-resistant infections each year. The medical costs per patient range from approximately $18,500 to nearly $30,000, with hospital stays for patients with antibiotic-resistant infections extended by 6.4 to 12.7 days. In total, the economic burden created by antibiotic resistance in the U.S. is estimated at $55 billion, with $20 billion in medical costs and $35 billion in lost productivity/wages from excess hospital stays.

But it’s easier to attract investment for chronic diseases that require a lifetime of medications, or, alternatively, for acute conditions (even for orphan diseases) that can command premium pricing.

The limited ability to recoup extensive investment in the antimicrobials led CDC Director Tom Frieden to express grave fears about the future, “The end of the road isn’t very far away for antibiotics — that we may be in a situation where we have patients in our intensive care units, or patients getting urinary-tract infections for which we do not have antibiotics.”

Dr. Margaret Chan, Director General of the WHO, concluded, “The R&D pipeline for new antimicrobials has practically run dry. The implications are equally clear. In the absence of urgent corrective and protective actions, the world is heading toward a postantibiotic era.” 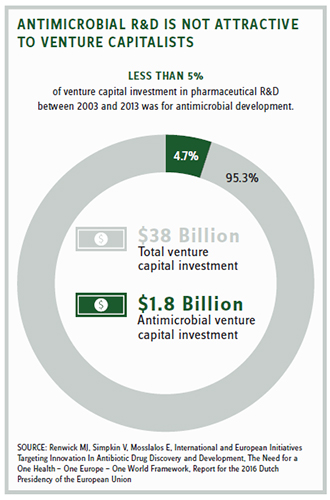 ANSWERING THE CALL
Congressmen John Shimkus (R-IL) and Tony Cardenas (D-CA) recently answered the call with introduction of the Re-Valuing Antimicrobial Products (REVAMP) Act of 2018 that provides a transferable conveyance award to a company that develops a novel antimicrobial product that treats a limited set of pathogens based on urgent medical needs. That list would be established by a task force composed of the FDA, CDC, and other public health officials and is expected to be more restrictive than the existing Qualifying Infectious Disease Product designation.

This conveyance award, worth 12 months of additional market exclusivity for another drug, can be sold to recoup economic loss of antimicrobial development. As such, it creates an innovative funding stream for antimicrobial developers by allowing profitable products in other therapeutic classes to cross-subsidize the development of antimicrobials that are unlikely to ever turn a profit. The program would initially establish a pilot for 10 products, and it includes guardrails to control unintended consequences and negative effects from prior “wildcard” exclusivity ideas.

To further assist early-stage R&D, the current REVAMP bill has an interesting feature that requires award winners to provide 5 percent of the total consideration to be provided to a nonprofit entity to work on new discovery. This giveback feature prompted support from front-line leaders, including Dr. Brad Spellberg, the chief medical officer of LA County-USC Medical Center, who stated: “The bill enables reinvestment of money into a public-private partnership that will align the interest of the public with market forces to ensure sustainability of the pipeline for these lifesaving medications.”

REVAMP’s advancement remains a challenge, particularly in the political environment where members of Congress are anxious about supporting any initiatives that appear to reward the pharmaceutical industry, regardless of the direness of the public health threat they are meant to address. But a pull incentive such as REVAMP may be one of the only options left to rescue a sector in desperate need of resuscitation.

As the executive director of the public-private CARB-X program, Dr. Kevin Outterson, stated, “Absent a pull incentive, I expect the last large company to exit antibiotics within the next year or two. No one will be left for the small research companies to partner with. A pull incentive is necessary to preserve a nationally strategic infrastructure.” Indeed.