Save Time And Money By Leveraging Pharma Shipping Regulations

When it comes to logistics, the life sciences industry may be too cautious, using dangerous goods labeling and other restrictive classification requirements unnecessarily. “Things are slipping through the cracks, and life sciences shippers are losing efficiency,” says Jay Johnson, regulatory compliance manager for Inmark and chairman of the Dangerous Goods Advisory Council. 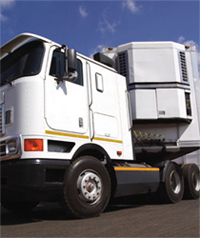 The problem often is that shippers don’t understand the fine points of the regulations’ exceptions and exemptions that can be used without sacrificing quality.

Regulations Make “Hazardous Materials” “NonHazardous” In transportation
“By knowing the regulations, you may not have to comply with all of the requirements when shipping dangerous goods,” Johnson says. “A nonregulated substance labeled with a radioactive isotope or shipped in a flammable liquid is considered a dangerous good for transport. However, infectious-substance regulations allow category A and B pathogenic materials to be shipped with up to 30 ml of flammable, corrosive, and miscellaneous materials in the tube with the pathogen without noting them. That’s one of the few examples where you can ignore subsidiary risks.”

When cell samples from a Pap smear, in contrast, are shipped in vials containing flammable liquid, the vials must be declared a flammable. “Once the lab draws the samples, capturing the potentially infectious biologic, the cells can be returned to the lab as a category B substance without recognizing the flammable liquid still present. The packaging must comply with the regulations, but only the marking has changed.” The benefit, Johnson says, is that some labs report speedier delivery of biologicsubstance, category B items than of flammable liquids, even when shipped as a “dangerous goods in excepted quantity.”

Shipping departments often depend upon MSDSs (material safety data sheets) to determine whether a substance must be shipped as a dangerous good. However, an MSDS may not include the information shippers need to make that determination. Using an MSDS to determine hazard, for example, could cause a substance containing minor amounts of phosphoric acid to ship as if it is 100% phosphoric acid. “An MSDS may be written to an active ingredient, but transportation should be based on the actual formulation,” Johnson says.

Use the New De Minimis Exception
The changes to the dangerous goods regulations include a new de minimis exception, contained within CFR Title 49 part 173.4b and in the international regulations. “The pharmaceutical industry will be one of the main users of this new de minimis regulation because of the thousands of samples shipped globally,” says Richard Lattimer, health, safety, and environmental compliance assurance consultant for Eli Lilly and Company. “Before the de minimis regulations, there was no minimum amount of hazardous material that was considered unworthy of regulation.”

The new de minimis exception allows certain types of hazardous materials, including division 6.1 toxins, to be shipped as nonregulated goods if the volume of the inner receptacle is less than 1 ml or weighs less than 1 gram, the package contains no more than 100 ml or 100 grams, and the packaging can withstand a 1.8 meter drop and a compression test.

“These substances may be uncharacterized components in compound libraries, for example, and thus lack LD50 [i.e. the amount of a material, given all at once, which causes the death of 50% of a group of test animals] data needed for proper classification,” Johnson elaborates. “Before January, the most restrictive classification of packing group 1 toxins (which some airlines won’t accept) was used to transport these items. Now they can be shipped as unregulated substances.”

Nonetheless, “It’s a good idea to put ‘De Minimis Quantities — Not Restricted’ on the paperwork,” adds Dave Murphy, VP and director of sales for the Americas at QuickSTAT, a global clinical trials logistics provider. 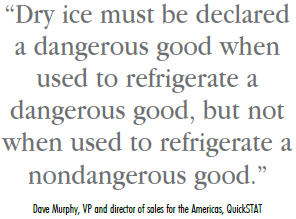 The recent planned removal of ORM-D (other regulated materials — domestic) includes expanding the limited-quantity (LTD QTY) exception for dangerous goods shipped domestically. “The new limited-quantity regulations give the power of ORM-D to all domestic limited-quantity shipments by ground. ORM-D only works domestically,” Johnson stresses, and neither air nor ocean shipping is included. With the new limited-quantity exception, packing group 3 flammables, for example, now can ship up to 1.3 gallons per bottle in a 30 kg container with virtually no other requirements except a marking,” Johnson explains. “This reduces paperwork and special packaging needs.” Increased use of the LTD QTY exception could lower shipping costs substantially — “from thousands to hundreds of dollars per shipment — if customers would accept slightly longer shipping times for ground transport,” Johnson speculates.

In the rush to keep things cool, shippers forget that items also can become too cold. Johnson gives an example from several years ago regarding a human heart shipped internationally for transplant with instructions to re-ice it at a specific airport. Airport workers, accustomed to dry-ice, used that. The heart was ruined. “Phase change occurs at 0°C, so packages specifying 2° to 8°C must be packed with enough gel pack to keep them cool without freezing. A gel pack frozen to -20°C could spike the temperature too low for products in the 2° to 8°C range,” Johnson cautions.

Collaborate with Carriers
Murphy says that, ultimately, the integrity of the shipment is far more important than the speed of shipping. He recommends sending all the documentation — including the commercial invoice, dangerous goods classification, and import or export permits — to the logistics provider for review before the product is packed. Dangerous goods should receive particular attention to ensure the shipper isn’t over or under declaring the danger, so that the shipment can move safely and expeditiously.

Close collaboration coupled with a document review before the item is shipped can reduce the number of shipments rejected by carriers and, therefore, speed door-todoor transit. “In the past year or two,” Johnson says, “the FAA gained the authority to demand a list of all dangerous goods shippers whose packages failed inspection within the past six months.” This implies that shippers appearing frequently on that list may be flagged for special attention. Additionally, the FAA now may open noncompliant dangerous goods.

Murphy also advises shippers to always use current forms. “The change between versions of forms may not be dramatic and, to the inexperienced eye, the forms may look alike. But, it only takes a subtle change to disrupt a shipment.”

The airlines have their own rules regarding what they will accept, and logistics providers know those rules. “Individual airlines won’t reduce IATA regulations, but may require more,” Murphy says. Dry ice is an example. “So, when reviewing documentation, we also look at flights to ensure that the carrier we choose won’t deviate from IATA rules.”

Ports of entry matter, too. “It’s good to evaluate the conditions of ports of origin, transit, and final destination,” says Verónica Rocio Piñón, global logistics consultant for Eli Lilly and Company. “Some countries have lower standards of infrastructure that don’t always provide ideal storage conditions. Therefore, robust packaging is vital to protect the product until it is released from customs to its final destination.”

In addition to infrastructure, also ascertain that ports have the necessary inspectors to minimize delays. In the U.S., this may include customs, FDA, the Department of Agriculture, and even the Department of Fish and Wildlife for some cell cultures, Murphy adds.

Overprotective shippers err on the side of caution. But shipments can be equally safe when shippers use the regulatory exceptions and exemptions applicable to their shipment, thereby saving time and money by reducing the paperwork and the number of reviews needed to move shipments throughout the world. Companies need a deep understanding of the rules and exceptions governing their shipments, either in-house or through their logistics provider.