New single-use technologies are seeing greater adoption beyond preclinical and clinical applications and into commercial-scale manufacturing. As biomanufacturers attempt to keep up with the steady increase in expression yields and improve the management of their processes, more — and better — sensors and control equipment are being demanded. The need for single-use bioprocessing sensors and probes is increasing, as process monitoring and automation pushes their adoption. Comparatively few of these single-use products are currently available, and there are often issues regarding utility, standardization, and connectivity. Even aspects like ports and how to pass disposable sensors through bioreactors and bag liners need improvement.

When we break down the responses, we find that disposable probes and sensors are much more desired this year by biotherapeutic developers (41.3%) than CMOs (27.8%). On a regional basis, U.S. respondents have become more interested in innovation in this area (46.5% this year vs. 41.3% last year), while Europeans are slightly less interested (31.4% this year). Respondents from other countries around the world, who last year displayed limited desire for innovation in disposable probes and sensors, are catching up this year, up 10% points to 26.1%. This could be another indication of developing countries’ need for bioproduction using single-use technologies.

Digging Deeper: Simple Sensors are Most Critical
To look further into the need for improved single-use sensors, we asked respondents to identify which, out of a list of 12, they would like to see introduced or improved. We found that the most critically needed device is for measuring pH in single-use applications, noted by 71% of respondents. A majority of respondents also indicated that they are seeking innovation in dissolved oxygen (61%) and cell density (52%) sensors.

Interest in innovation was fairly high across much of the list of sensors we provided. About 4 in 10 respondents indicated that they would like to see the introduction or improvement of the following sensors: CO2, glucose, in-line titer, cell viability, temperature, and conductivity. Although growing rapidly, relatively fewer users of TOC and flow sensors showed interest in greater innovation.

Looking at trends on a year-over-year basis, we see that interest in assays overall is growing at a rapid clip. Of the 12 sensors we identified, 9 saw increases in demand this year. CO2 topped the list in terms of growth in interest, 47% this year, up from 38% last year. The most notable increases include:

It’s worthwhile to note that some of the biggest gains came for sensors that were low on the list last year. With at least 50% of respondents already clamoring for sensors such as pH and dissolved oxygen, increased interest for such products are likely to be more muted. But the jumps for those on the lower rungs suggests that demand for improved sensors is broad, and innovations in a number of these might find ready markets.

What’s Next For Disposables In Biomanufacturing
Measuring and monitoring production processes is critical in biomanufacturing. Today, however, many of the common devices used to manufacture biologics in stainlesssteel, fixed facilities do not always translate well into singleuse systems. The need to avoid product contact and reduce the risk of product contamination is critical to designing a fully disposable operation.

We do see indications that the industry’s suppliers and innovators are investing in research to improve versions of sensors and assay devices. Separately in our report, when we asked vendors what new technologies or new product development areas they are working on, around one in five suppliers indicated sensors and probes to be an area of focus for their new product R&D. While that may appear to be a fairly small proportion, it was roughly in the top quintile of responses among the long list of areas that were evaluated. As the industry matures, we can expect to see several suppliers introducing technologies such as singleuse sensors and mixers to differentiate themselves from the competition.

It is indeed possible that the next step for increased use of disposables in biomanufacturing will concern implementation of disposable sensors (such as UV detectors and pH and DO [dissolved oxygen] probes), rather than disposable containers, filters, and chromatography columns. 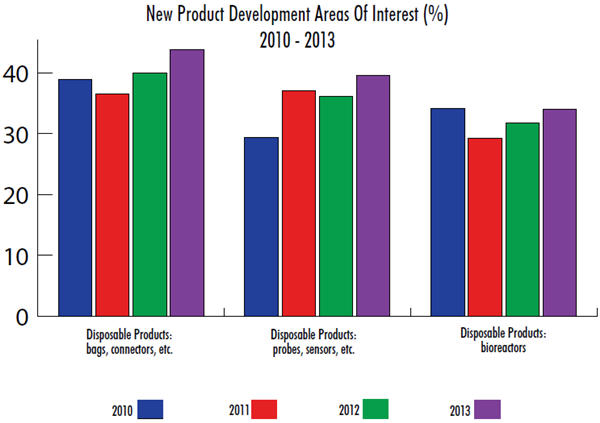 Survey Methodology: The 2013 10th Annual Report and Survey of Biopharmaceutical Manufacturing Capacity and Production is an evaluation by BioPlan Associates, Inc. that yields a composite view of and trend analysis from 300 to 400 responsible individuals at biopharmaceutical manufacturers and CMOs in 29 countries. The respondents also include more than 185 direct suppliers of materials, services, and equipment to this industry. Each year the study covers issues including new product needs, facility budget changes, current capacity, future capacity constraints, expansions, use of disposables, trends and budgets in disposables, trends in downstream purification, quality management and control, hiring, and employment. The quantitative trend analysis provides details and comparisons of production by biotherapeutic developers and CMOs. It also evaluates trends over time and assesses differences in the world’s major markets in the U.S. and Europe.