Following the Great Recession of 2007-09, leaders in Michigan came up with a plan for diversifying its industries. The state’s dependence on the automobile industry, the country’s largest, had threatened to cripple its entire economy until the federal government intervened. The state — and the companies — might not be so lucky next time. So, the plan for a more diversified Michigan of the future includes looking to one of its core industries of the past: the life sciences.

Few people know that the first pharmaceutical companies in the U.S. were founded in Michigan (see sidebar). In the past 100-plus years, the biopharma industry has become bicoastal, with most large companies headquartered in Massachusetts, New Jersey, and California. It has also become an industry dominated by large multinational corporations that began buying up Michigan’s larger companies in the early 2000s.

“We’ve largely recovered from that consolidation and have been growing at a nice clip,” says Stephen Rapundalo, Ph.D., a former pharmaceutical researcher who now heads the Michigan Biosciences Industry Association, known as MichBio.

The current growth in Michigan’s life sciences industry is largely due to efforts at the state level to fund innovation, provide affordable wet-lab space for fledgling companies, and offer incentives for established ones that are looking for a business-friendly place to relocate.

According to a 2016 Bio/TEConomy report, a total of 44,277 people are employed in the life sciences industries in Michigan, with an employment multiplier bringing that number to 248,348. Of those, 8,813 were employed in biopharma, ranking Michigan 11th in the country in terms of biopharma employment. The state is home to 105 life sciences companies, ranking it 13th in the U.S. with respect to such establishments. About 85 percent of the state’s companies are located in the southern part of the state. The Michigan Economic Development Corporation (MEDC), a quasi-government agency that is responsible for economic growth and attraction across the state, has made it a priority to make Michigan one of the top 10 states for biotech in the country. 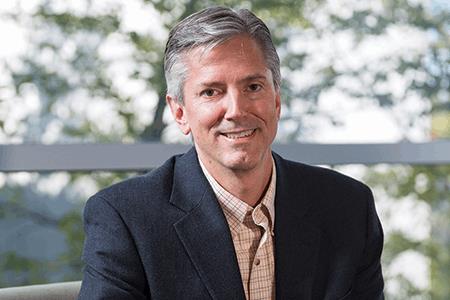 "About half of our funded companies are making exits now in one way or another, either through licensing of products or startups."

Published in 2016, MichBio’s Roadmap for Success will be updated every year to reflect any changes, challenges, or successes the state experiences. The current plan calls for the state to focus on “agri-biosciences, medical devices, biopharma, R&D/testing, and biologistics.” The document is essentially a “to-do” list that helps people like Rapundalo guide discussions with lawmakers and decision makers. He says MichBio looked at the list of other comparable-sized states and saw that top states all had published strategic plans.

“We now have our own guide that lets us say, ‘This is what we need to compete with other regions, domestically and globally.’”

EXPANDING FUNDING
MichBio’s road map calls for technology transfer and entrepreneurial activities between academic research centers and the bio-industry to be better integrated. To that end, state leaders decided recently to build upon the success of a five-year-old program at the University of Michigan’s Medical School called Fast Forward Medical Innovation (FFMI). Using funds from the Michigan Translational Research and Commercialization (MTRAC) statewide program, FFMI has awarded funding to 34 projects over four years, resulting in 10 new startups.

“About half of our funded companies are making exits now in one way or another, either through licensing of products or startups,” says Kevin Ward, M.D., FFMI’s executive director. The success of the program lies in mentorship. The program provides specialized education that includes mentorship and a team of venture capitalists, medical industry partners, and commercialization experts. “No matter where a research team is at on the innovation road map, we have something to offer,” Ward says.

In July 2016, the Michigan Strategic Fund extended FFMI by creating the Life Sciences Innovation Hub, focusing on innovation in four areas: devices, diagnostics, therapeutics, and healthcare IT. The statewide hub is co-managed by the FFMI program and the university’s Office of Tech Transfer. The hub opens up $3.5 million in MTRAC grants to researchers on and off-campus at any nonprofit, university, or health system that can apply for either early-stage Mi-Kickstart awards ($25,000 to $30,000) or midstage Mi-TRAC awards ($100,000 to $200,000).

The hub just completed its first round of funding and is working toward helping investigators reach their next milestones. “This is a partnership between the university and the state to get researchers that extra bit of money, and, most importantly, mentorship to turn ideas into products. This is something you see being implemented across the country,” Ward says. “What makes us unique is that we are integrating mentorship, business development, education on project funding, and commercialization.”

PROVIDING CRITICAL WET-LAB SPACE
Fostering the next generation of biopharma companies, as MichBio’s plan calls for, is not easy when buildings that contain wet-lab space are the most expensive per square foot in any real estate market. For those fledgling companies, Michigan offers several innovation centers across the state that include wet-lab space. One of the most successful innovation centers with wet-lab space is the 57,000-square-foot Michigan Life Sciences and Innovation Center (MLSIC) in Plymouth Township.

“This facility is developing many exciting and innovative products,” says Fredrick Molnar, MLSIC’s executive director and VP of entrepreneurism for MEDC. “We have some great ideas and some excellent companies here. It’s our job to support them and see that they make it past the idea stage and into the expansion phase where they can go out on their own and help diversify the Michigan economy.”

MLSIC is the fortunate result of one of the state’s pharmaceutical industry’s most dramatic job losses. In 2007, Pfizer closed R&D operations in Ann Arbor and Kalamazoo, leaving 2,400 people without jobs and cutting the biopharma workforce by 30 percent overnight. While the University of Michigan bought Pfizer’s main campus in Ann Arbor, a newly remodeled R&D facility in nearby Plymouth Township was eventually purchased from the company by a public-private partnership between MEDC and several private foundations. 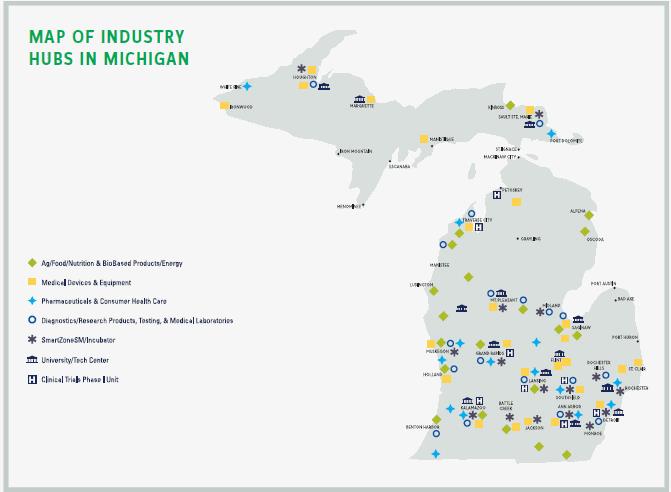 “We needed a space for those talented people who were thinking about leaving the state,” says Roger Newton, Ph.D., founder of Esperion Therapeutics. Newton is codiscoverer and product champion of Lipitor, the best-selling pharmaceutical ever. To help keep people in the state, Newton joined forces with Mike Finney, who was then the executive director of Ann Arbor SPARK, an entrepreneurial support group started in 2005. Together, they negotiated with Pfizer for the purchase of the Plymouth Township facility.

One of MLSIC’s first tenants was Newton’s Esperion. Newton sold Esperion to Pfizer in 2004 and, when Pfizer shut down R&D in Michigan, Newton bought back the Esperion name, also bringing with him senior talent and two patents from the original Esperion portfolio. Today, “Esperion 2.0” has a drug candidate, bempedoic acid (ETC-1002), in Phase 3 clinical trials that reduces LDL, the bad cholesterol, without an increased risk of muscle pain/weakness associated with statin use.

MLSIC is now home to a diverse group of startup companies run by new and serial entrepreneurs. These companies have a wide range of products in development. These include Tissue Regeneration Systems, which is developing skeletal reconstruction and bone regeneration technology; Celsee Diagnostics, a company making products in the emerging field of liquid biopsy; and Tespo, which has developed a Keurig-like countertop machine for dispensing vitamins that does away with excipients.

ATTRACTION & FUTURE OUTLOOK
In addition to fostering the growth of new companies, MichBio’s road map calls for establishing a business- friendly environment. “We have eliminated over 2,100 industry regulations for businesses over the past six years,” says Tino Breithaupt, MEDC’s senior vice president for national and global business development. Breithaupt is responsible for attracting existing companies to the state.

In order to simplify the tax code, Breithaupt explains, the state has implemented a flat 6 percent corporate tax. The state also passed legislation eliminating the personal property tax for manufacturing and technology businesses. “From a community perspective and a state perspective, this puts us in a better position to attract business.” Breithaupt also says MEDC supports companies once they have relocated. “We meet with these companies on a regular basis to see how things are going for them and see if there is anything we can do to assist in their growth short- and long-term.”

By the time the first automotive companies were setting up shop in the early 1900s, Michigan was already home to Parke-Davis (1871) and Upjohn (1886); both eventually were bought by Pfizer. Another company, Perrigo, was founded in 1887 and for many years was the world’s largest manufacturer of OTC drugs in the country. Its CEO is still based in the town in which it was founded, Allegan — a city of just under 5,000 residents.

That prominence continued into more recent times. The world’s largest-selling drug, Lipitor, was invented and developed by the Ann Arbor facilities owned and operated by Warner Lambert/Parke-Davis. Pfizer, which was co-marketing and distributing Lipitor when it was launched in 1997, bought Warner Lambert/Parke-Davis in 2000. Zantac, Motrin, and the anthrax vaccine — to name a few — were also developed in the state. Consolidation of companies in the 2000s, however, led to economic chaos in the state. The state was left without a large pharmaceutical company headquartered there. Upjohn and Parke-Davis were lost. Then, in January 2007, Pfizer announced it would be closing down R&D facilities in Kalamazoo and Ann Arbor, costing Michigan 30 percent of its biopharma jobs at the time. A part of that loss was later turned into a gain when a former Pfizer research facility in Plymouth Township was purchased by a public-private partnership and turned into the Michigan Life Sciences and Innovation Center (see main story).