The Art Of The Turnaround In Pharma

Insight From The Chairman Of The Board 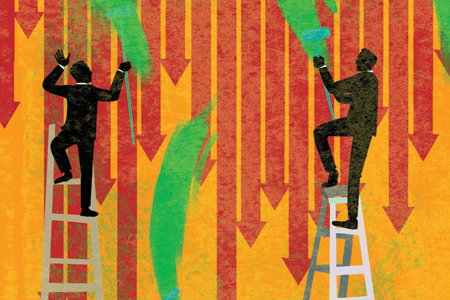 There are many reasons and motivations why business leaders decide to start a pharmaceutical company — make money, gain prestige, leave a legacy, etc. Or perhaps they do this simply because of a desire to fill a perceived market need and help people. For Leonard Jacob, M.D., Ph.D., it was the desire to link science to medicine and business. By the age of 34, Jacob had risen to the position of worldwide VP of pharmaceutical development at SmithKline & French Labs (now GlaxoSmithKline). A mere five years later, he had had enough of Big Pharma. “What you have is a bureaucracy where there is constant review, prioritization, and reprioritization, resulting in a management fiasco of private teams making decisions without the line authority to fund them,” he states. To realize his desire to link science to medicine and business, he felt he would have to do so in an entrepreneurial venue and exit the security of Big Pharma. Since that day, the 35-year industry veteran has cofounded a pharmaceutical company that was eventually dissolved, founded another that was acquired for $190 million, and served as the chairman of the board of two publicly traded companies — Bradley Pharmaceuticals (acquired by Nycomed and subsequently acquired by Takeda) and Antares Pharma (NASDAQ: ATRS), a specialty pharmaceutical company created through the merger of Permatec and Medi-Ject Pharmaceuticals. What he has learned through these experiences is how to go about assessing and fixing a troubled company.

Assess The Product First – Then The Leadership
Shortly after leaving his position as chairman of the board for Bradley Pharmaceuticals in 2006, Jacob received a call from Jacques Gonella, Ph.D., then chairman of the board for Antares Pharma. “He was in Africa and called me in a panic, saying, ‘Len, I need you to be chairman, and I need you to be chairman now,’” Jacob recalls. Gonella had founded Permatec, which merged with Medi-Ject Pharmaceuticals to form Antares. Jacob joined the company officially in 2007 and took over as chairman of the board in 2008. When he received that phone call from Gonella, the company’s market value was around $29 million.

Jacob believes that when assessing a company for growth, although the management team and financials are two common factors to consider, the most important is product opportunity. “If you look at the core principles — good technology, good products, good patents — you can’t take those away. If companies have good products, they should generate revenue. If they aren’t generating revenue, 9 times out of 10, it’s people performance.”

According to Jacob, commercial failure is often the result of a breakdown between linking the bench to the bedside. To build value in a company, you need the commercial element that comes not only from having good products being developed at the bench, but from understanding how to link that science to how a patient will actually use the product. “In order to do so, you can’t hire physicians who are merely clinicians and don’t understand the science,” he states. “Conversely, you can’t have scientists developing products who have no experience with how the patient will actually use it.”

If a company has good products (which Jacob determined Antares had), you next need to look at the leadership. To do this, Jacob tapped into his past experience as a CEO of InKine, a company he founded in 1997 but eventually sold since he realized he didn’t have the commercial skillset to make it successful in the GI space. He says learning those types of tough lessons about his own capabilities as a leader (see sidebar, “Lessons Learned From Failure”) has helped when he has to assess if a company’s executives can grow the business.

One of the biggest problems Jacob sees when he evaluates a CEO is that many of them lack the vision to recognize problems that may occur in the next three to six months. “They are so immersed in meeting the revenue challenges of today they actually don’t pause to say, ‘Here are the things in the future that can end up biting me in the behind.’ When I come in as a chairman of the board to try to turn around a company, this is something I look for immediately.” When Jacob joined Antares, he determined the CEO at the time was too much of a financial person in a technology-driven company. “He was counting dollars while there was nobody really being a champion around some very impressive formulation and device-engineering work,” he attests. Jacob also quickly recognized there was a cultural disconnect throughout the organization. Eventually, the CEO and the company parted in an amicable way. “I elected, with our board, to appoint Paul Wotton, Ph.D., an actual board member, to be the new CEO. He had been the CEO of a Canadian company, Topigen Pharmaceuticals.” Prior to Wotton taking over in 2008, the company was replacing the top spot on an average of every 3.5 years. Having a CEO carousel is not the best approach to create a consistent culture, let alone fix the cultural disconnect he had uncovered, which became the next task on Jacob’s agenda of turning Antares around.

Integrating Cultures Necessitates Tough Decision Making
Because Antares was formed from the merger of two companies, the company had a device facility located in Minneapolis, a corporate office in Ewing, NJ, and a research arm in Allschwil, Switzerland. “When you have a market value of $29 million and you are running out of money, you had better start changing the culture of the enterprise,” Jacob states. “What that meant was Paul had to build a team and integrate the three locations so they were all stakeholders, working on one project, and that project was making Antares successful.” Jacob and the leadership team quickly recognized Switzerland was a problem in trying to bring the business together. “We elected very rapidly to close down the Swiss research center, a decision that was tough, economic, and strategic.” In a brilliant move, the company signed a simultaneous license-and-asset purchase agreement with Ferring on Nov. 11, 2009. In the deal, Ferring obtained the rights to certain IP relating to Antares’ proprietary transdermal gel delivery technology, agreed to purchase the research equipment, and assumed responsibility for the Antares leased development facility in Switzerland. In addition, a majority of the current employees of the facility became employees of Ferring. The agreement didn’t impact any of Antares’ current licenses, minimized the financial impact that results from closing a facility, minimized the loss of jobs, and allowed Antares to jettison a cultural integration challenge.

With that behind them, leadership could then focus on putting more support behind the Minnesota device area, which was producing patents around autoinjectors and needle-free injectors. To do this, the company needed more revenue and sought to develop some strategic partners, which required the chairman and CEO to work hand in glove. For example, Wotton and Jacob met with the CEO of Teva North America over dinner. In 2009, Teva (NYSE: TEVA) received FDA approval to market the Antares needle-free injector with the hGH product in the U.S. Antares also created partnerships with the biggest of Big Pharma, Pfizer (NYSE: PFE), in 2011, as well as another top 50 pharma company, Actavis (NYSE: ACT), formerly Watson Pharmaceuticals. Antares continues to expand its IP portfolio with 43 patents filed and 9 patents issued in the past 18 months. It also has two potential blockbusters in the works -- OTREXUP, a patented autoinjection system that works in combination with methotrexate to help rheumatoid arthritis (RA) sufferers, and a combination testosterone drug-delivery system for hypogonadism. OTREXUP is currently under FDA review with a potential approval as early as October; the second drug has entered clinical trials.

The Antares model is to take generic drugs and link them to a patentprotected device system with a clear safety or efficacy benefit. This model builds extensions through a product’s life cycle, creating additional exclusivity. With a market cap of just over half a billion dollars, Antares has analysts like The Motley Fool taking notice of its successful turnaround -- something Chairman of the Board Jacob describes as less of a science and more of an art.

According to Business Week, the average life expectancy of a multinational corporation is between 40 and 50 years. Research conducted by Bradley University and the University of Tennessee this past July revealed 25 percent of U.S. start-ups will fail in the first year, and 71 percent will have failed by their tenth year of operation. Leonard Jacob, M.D., Ph.D., knows firsthand the pain of creating a business only to watch it fail. In 1989, he cofounded Magainin Pharmaceuticals and served as the COO until 1996. “The company was focused on isolating antibiotics and anticancer agents from frog skin,” he recalls. In 1999, the FDA rejected the company’s small antibacterial peptide it had been working on for the treatment of diabetic foot ulcers. The bad news resulted in its cofounder and discoverer of the peptide, Michael Zasloff, M.D., to leave the company and return to an academic position at Georgetown University. Two years later, the company changed its name to Genaera Corporation. In 2009, the company filed a certificate of dissolution having never brought a drug to market.

Though the experience was financially successful for Jacob personally, the fact that he left the company, which eventually went belly up, places it in the failure category. The role being played by the company founder is a valuable lesson he learned from this experience and something he applies when evaluating companies as to their potential success as a turnaround. “I will support founding scientists in their labs and universities,” he affirms. “However, I want no founding scientists in my building.” According to Jacob, the brilliance of founding scientists functioning as the CEO of a company can be a problem. “They’re brilliant. This causes them to think they are smart in every aspect of our business, such as drug development and marketing, even though they may have had no experience in these areas.” Founding scientists have powerful personalities, which can destroy the culture of a company. “To truly have a successful company, the CEO has to build a culture within the company that is motivating, rewarding, and kind, so people don’t look at their watch and say, ‘It’s 5 o’clock. It’s time to leave’,” Jacob says.

Though Jacob experienced butting heads with a company founder in his own business, he also experienced it when he became chairman of the board at Bradley Pharmaceuticals, a public company being run as a private business by a very dynamic CEO who was also the company founder and chairman of the board — the late Dan Glassman. When Jacob joined the company, Glassman had to give up some power. “Giving up authority is very difficult for a company founder to do,” he states. “However, as a public company, you are ultimately responsible to the shareholders.” According to Jacob, when you have a founder who is not willing to do what is necessary to turn around a company in decline, the only way out for shareholders is to find a company willing to purchase it at a premium. This is what happened in the case of Bradley. When Jacob had joined the company and was subsequently named the chairman of the board, the stock was trading around $6 to $7 a share. In 2007, Nycomed purchased the company for $20 a share. Jacob describes the process of supplanting a founder to be a difficult situation from a governance perspective. To maintain the best interest of the shareholders, Jacob believes company founders of publicly traded companies should not hold the positions of both CEO and chairman of the board.