The Biosimilars Opportunity: 4 Years Of Waiting

Biosimilars have been approvable in the U.S. since the 2010 passage of biosimilars-enabling legislation. However, no product applications have been approved. A few have been filed, but the industry largely remains on hold as the FDA waits to release needed guidance. Now, even the U.S. Senate is pushing the FDA to release guidance documents on biosimilar drug approvals. A group of senators in August wrote the HHS (Department of Health and Human Services) about the implementation of the Biologics Price Competition and Innovation Act (BPCIA), enacted to push the FDA to develop a framework to review and approve biosimilars. This delay has heightened concerns about just exactly how biosimilars will affect patients, insurers, drug companies, and even suppliers.

BioPlan has evaluated this industry for over 25 years, and out of the roughly 4,500 biopharmaceutical candidate products in the pipeline, around 20 percent (approximately 900) are follow-on biopharmaceuticals, mostly biosimilars (>500), but also biobetters. In our studies, we outline that only a percentage of these will make it to the market.

Of interest are questions about how expensive biosimilars will be, how they will be marketed, and whether more efficient (cheaper) manufacturing for biosimilars could ultimately improve biomanufacturing for all products. Other unanswered questions include concerns regarding the extent of competition. As new industry entrants emerge, some will be more concerned with getting U.S. approvals than with actual revenues and profits. This may result in disruptive pricing that could affect other areas of biologics as well.

EXPECT MORE SMALLER PLAYERS TO ENTER THE MARKET
There are some undisputed trends accompanying the growth of biosimilars. We can expect many new companies to this industry of all sizes and types — including generic drug and foreign companies. We will find emerging geographies seeking to establish themselves in the mainstream biopharmaceutical industry via a biosimilars route. This will continue as the industry matures and more products come off patent.

For many biosimilar/biobetter developers, profits or capturing market share in major markets such as the U.S. and EU might not be a primary goal. Instead, it’s likely that they’ll view U.S. product approval — even if just for a biosimilar — as validation, and regulatory acceptance of that product for sales in lesserregulated markets around the world. These entrants may also see gains in company valuations, after U.S. or EU product approval.

THE U.S. MARKET TAKES SHAPE
The U.S. will most likely still be the dominant biosimilar consumer market. Even compared to the EU, the U.S. has a large population and an insurer base motivated by cheaper biosimilars. It’s therefore likely that the U.S. will become very competitive and perhaps overcrowded, as dozens of new and established companies jockey for market share. Profit margins may be driven down as a result. Despite this, the U.S. biosimilars opportunity is attractive. Indeed, as the chart on page 22 shows, biosimilars will soon be able to compete with reference products that boast cumulative annual revenue of roughly $100 billion.

SUMMARY
These trends toward production efficiency will also affect manufacturers of future reference products. As better production technologies emerge, they will first improve new biological product manufacturing. That is, advanced bioprocessing technologies will first provide advantages to makers of these newer follow-on products, As such, we can expect biosimilars and biobetters to be factors in the pioneering of many new technologies, such as better analytical methods, improved expression systems, single-use systems, alternatives to Protein A, and other conventional chromatography processing.

In a recent survey among BioPlan’s Biotechnology Industry Council™, our 425 global subject matter experts identified the following micro-trends in the biosimilars market:

To those trends we also add that many current developers face challenges in the short term. Many companies are already far ahead, and the competition will be fierce as many seek to market the same product to a limited pool. Overall, the coming wave of biosimilars and biobetters will bring big changes to the market, enhancing the role of the CMO, expanding the number of players in the global market, and spurring breakthrough new technologies. Our upcoming studies will provide global subject matter review of these trends and their impact on global biopharmaceutical markets. 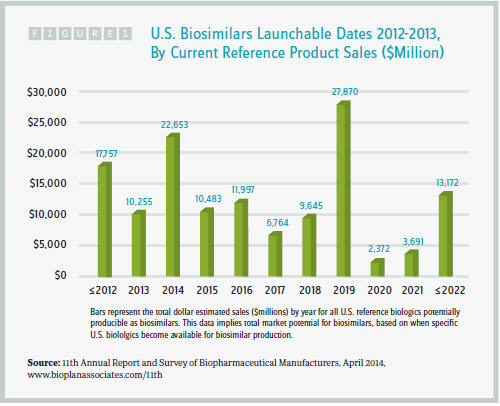 Survey Methodology: The 2014 Eleventh Annual Report and Survey of Biopharmaceutical Manufacturing Capacity and Production yields a composite view and trend analysis from 238 responsible individuals at biopharmaceutical manufacturers and contract manufacturing organizations (CMOs) in 31 countries. The methodology also included over 173 direct suppliers of materials, services, and equipment to this industry. This year’s study covers such issues as: new product needs, facility budget changes, current capacity, future capacity constraints, expansions, use of disposables, trends and budgets in disposables, trends in downstream purifi cation, quality management and control, hiring issues, and employment. The quantitative trend analysis provides details and comparisons of production by biotherapeutic developers and CMOs. It also evaluates trends over time and assesses differences in the world’s major markets in the U.S. and Europe.