Trends In Outsourcing – What's Going On In Big Pharma

It should come as no surprise that, when looking for new trends in pharmaceutical development and outsourcing, the industry giants often referred to as Big Pharma are the most popular topic of interest. Big Pharma has been a leader in identifying ways to maintain or improve profitability while simultaneously making efforts to speed up the process of bringing new drugs to the market. While these giants receive their share of flak (oftentimes from the media inciting the general population), they are also a source of inspiration and guidance for the biopharmaceutical industry and a signal of what’s to come.

As such, Nice Insight reviewed the behaviors and preferences among Big Pharma respondents who participated in the pharmaceutical and biotechnology outsourcing survey over the past two years. Big Pharma comprised 29% of the respondent base in 2012 and 30% in 2013. Two key data points came from the profile information collected on Big Pharma that will benefit CROs and CMOs that offer drug development services. The first is that outsourcing expenditures increased from 2012 to 2013, with a 6% uptick in companies that spend in excess of $50 million per year — from 49% to 55%. The second is that the average number of unique services outsourced increased from 4 to 6*. Both of these factors indicate that Big Pharma is maintaining its stance on outsourcing as a cost-savings strategy.

OUTSOURCED SERVICES ARE INCREASING
Complementary to the rise in spending and increased number of services outsourced, 11 of 19 outsourced services tracked in the survey showed an increase of 5% or more among Big Pharma respondents. Seven more services showed an increase from 1% to 4%, and only one — fill finish — showed a slight decrease (-2%) in demand as compared to last year. Clinical research revealed the highest increase of 13%, up from 33% in 2012 to 46% in 2013. Clinical research was followed by analytical testing, which rose 9%, from 34% to 43%, and bioanalytical testing, which climbed 8% from 26% in 2012 to 34% in 2013. Process optimization and product characterization also showed an increase of 8%. However, despite this increase, fewer than one in five Big Pharma respondents will engage an outsourcing partner for process optimization or product characterization in the next 12 months.

Data collected through Nice Insight’s strategic partnering studies revealed the top motivations for outsourcing among Big Pharma respondents are improved quality (54%), improved time-to-market (49%), and decreased fixed costs (45%). While the annual research data reiterates Big Pharma’s continued reliance on outsourcing as a means for cost savings, there was a notable change in the way Big Pharma prioritized Nice Insight’s six outsourcing drivers: affordability dropped from third place in 2012 to fifth place in 2013, having fallen behind regulatory and productivity. It is doubtful that this change in rank means Big Pharma spending will be unleashed; rather, it is likely an indication that lower prices are not a substitute for imperfect regulatory compliance or reduced productivity.

In addition to the differences in outsourcing behaviors from 2012 to 2013, there were some differences in how Big Pharma engages CROs and CMOs. Most notably, Big Pharma respondents expressed a stronger interest in forming strategic partnerships with CROs — 9 out of 10 said they are interested as compared to 8 out of 10 expressing interest in a CMO strategic partnership. To further this notion, Big Pharma respondents admitted there is a greater likelihood for a CRO that started off as a tactical provider to become a preferred provider — 92% as compared to 72% for CMOs. This disparity continued when asked about the likelihood of a preferred provider becoming a strategic partner; 87% of Big Pharma respondents agreed it is likely for a CRO as compared to 69% who agreed it is likely for a CMO.

If your business is looking to partner with Big Pharma, understanding this customer group’s outsourcing motivations and needs will aid in creating customized communications that specifically address those needs. As a drug innovator, it may make sense to consider how the outsourcing strategies employed by Big Pharma would work for your business. 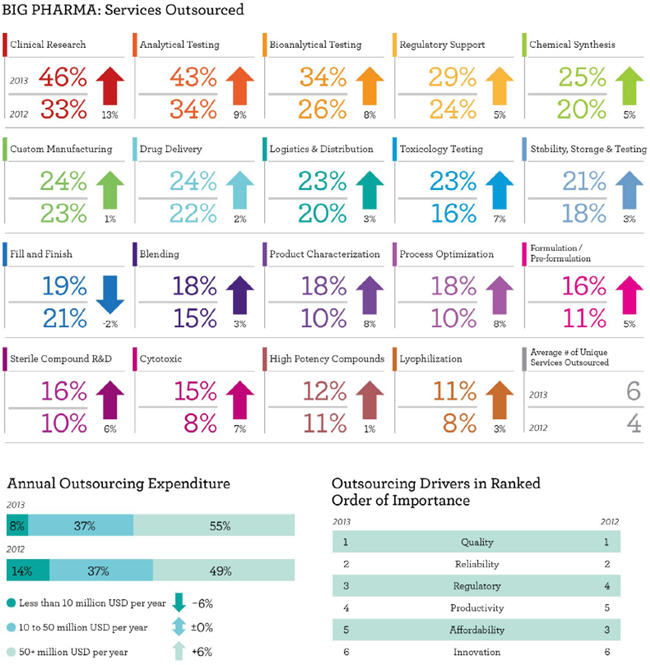 Survey Methodology: The Nice Insight Pharmaceutical and Biotechnology Survey is deployed to outsourcing-facing pharmaceutical and biotechnology executives on an annual basis. The 2012 sample size is 10,036 respondents. The survey is composed of 500+ questions and randomly presents ~30 questions to each respondent in order to collect baseline information with respect to customer awareness and customer perceptions on 170 companies that service the drug development cycle. More than 800 marketing communications, including branding, websites, print advertisements, corporate literature, and trade show booths, are reviewed by our panel of respondents. Five levels of awareness from “I’ve never heard of them” to “I’ve worked with them” factor into the overall customer-awareness score. The customerperception score is based on six drivers in outsourcing: Quality, Innovation, Regulatory Track Record, Affordability, Productivity, and Reliability.

If you want to learn more about the report or about how to participate, please contact Nigel Walker, managing director, or Salvatore Fazzolari, director of client services, at Nice Insight by sending an email to niceinsight.survey@thatsnice.com.