2020 Trends In Pharma Asset Licensing And Deal Terms: A Survey Of Key Decision-Makers 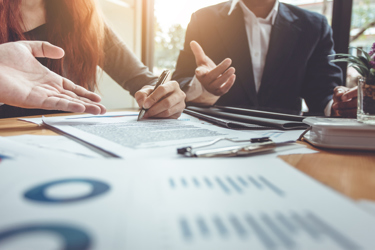 Across biopharma, asset licensing has increasingly been leveraged as a means to build on existing disease area leadership and/or diversify portfolios, be that in new disease areas, mechanisms of action (MoAs), modalities or geographies. Alignment of buy- and sell-side expectations is vital for deal execution. Parties broadly agree on the importance to asset value of development stage, revenue potential, target proof-of-concept (POC), competitive landscape and other factors. However, defining appropriate expectations of total asset value and component deal terms can be challenging, given the lack of transparency and detail in publicly available deal term data.

L.E.K. Consulting conducted a survey of 80+ biopharma business development (BD) professionals experienced in deal-making to gain insight into deal terms, provide more visibility into key factors driving deal value and structure, and identify forward-looking trends. In this article, we describe some key drivers of asset value, as well as areas of alignment and divergence between parties on deal expectations. We extract insights to level-set deal expectations and inform a more strategic approach to deal term negotiations for both buyers and sellers. Survey respondents represent a cross section of senior business development (BD) professionals with varied deal-making experience and company characteristics (see Figure 1).

As expected, therapeutic areas with high unmet need, market exclusivity and differentiated efficacy over the standard of care (SOC) are among the most important attributes for BD teams considering asset in-licensing. In a sign of the synergy licensing brings, companies that are out-licensing assets rate commercialization capabilities and disease area expertise as key determinants of suitable acquirers. Encouragingly, these complementary expertise areas converge to increase the probability of bringing treatments to patients in need. Factors of greatest importance to buyers during asset evaluation and deal negotiation ― differentiation, high unmet need and exclusive rights outweigh other considerations (see Figure 2).

“What exactly impacts deal negotiations can be imprecise. At the core is the asset data package … do I believe there is a sufficient therapeutic margin (over SOC) for a commercial product.” 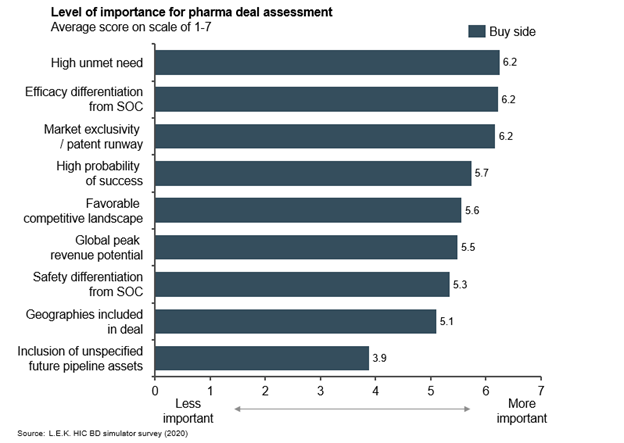 Despite some minor differences, buyers and sellers largely agree on how to structure deal payments. When deals fall through, misaligned assessment of asset value, structure of deal terms and distribution of future asset value between parties are the most common reasons.

The total deal value and proportion attributed to up-front, milestone and royalty payments form the crux of licensing deal negotiations. Parties agree that milestone payments represent the majority of deal value, and also agree on the value assigned to royalty payments. Not surprisingly, sellers expect higher up-front payments than buyers, who in turn apportion more deal value to longer-term R&D and commercial milestones. However, overall, the buy and sell sides are surprisingly well aligned on the structure of deal terms, setting up reliable benchmark expectations for initial deal term offerings. 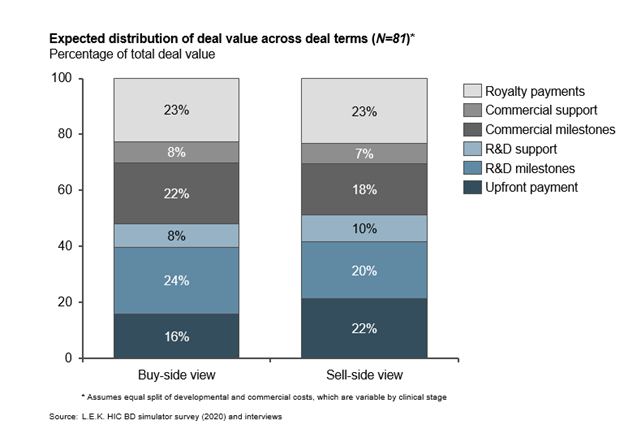 Out-licensers may be underselling late-stage assets

Possibly more important than deal structure is the value split between negotiating parties — i.e., of the total value realized by an asset, what percentage sellers realize through deal term payments and buyers retain through revenue.

Development stage at licensing strongly influences the percentage of value sellers realize. As a molecule becomes de-risked and closer to market, developers can expect a higher proportion of asset value on licensing. Parties strongly align on this for early-stage assets. Strikingly, for late-stage assets — Phase 3 and beyond — out-licensing companies may be underselling their assets, with buyers willing to attribute higher value for development they have completed. In other words, sellers may not be extracting as much value as they could for taking assets further in development. 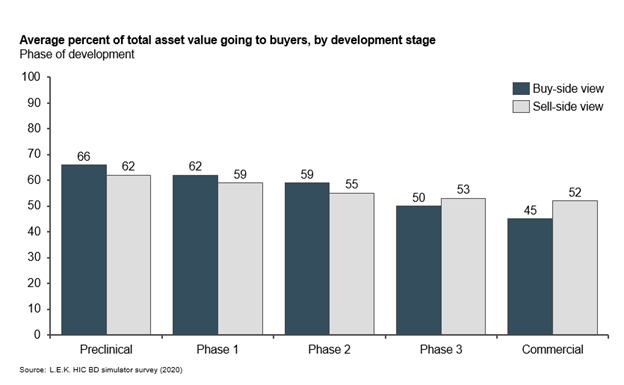 This data also points to buyers’ desire to acquire de-risked assets. It is striking that development phase is a bigger factor than asset revenue potential in determining asset value split. Buyers want to mitigate risk of development failure, and they consider alignment with company corporate strategy and portfolio as important as revenue potential.

Degree of novelty can be a double-edged sword during asset assessment. Novel modalities and MoAs are sought after, particularly in oncology and rare disease, where personalized treatments for targeted patient populations have become the norm. Buyers expect an increasing number of deals licensing novel modalities and MoAs over the next five years. However, buyers attribute less value than sellers to novel modalities; sellers expect earlier and higher premiums relative to assets with known MoAs. Both parties agree that demonstrating clinical POC is a key inflection point in achieving greater asset value. Phase 2 data is viewed as the key inflection point for clinical POC for most assets; however, oncology studies may have POC readouts earlier in development that allow for an earlier realization of increased deal value. 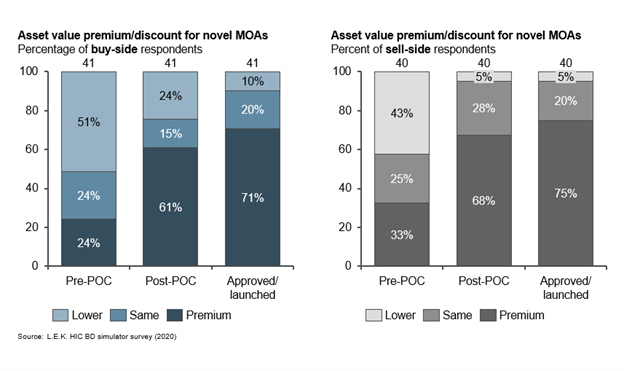 The general view is that the number of deals will increase in coming years. Traditional licensing deals will continue to dominate, though this increase is also expected for co-development, joint venture and early commercialization option deals. Buyers predict the biggest increase in traditional licensing deals, while sellers expect joint ventures to increase, communicating their desire to become partners in development.

BD professionals expect net increases in the number of deals across archetypes in the next 5 years. Buyers expect traditional licensing to dominate, while sellers expect more joint ventures (see Figure 6).

There is also a shared view that the total value of licensing deals may increase. Buyers expect a higher proportion of asset value in R&D support and commercial milestones, while sellers expect the largest increase in milestones with nearer-term payouts.

“‘Cash now’ is better than ‘cash later,’ so the focus of out-licensing terms are usually up-front and near-term payouts, which also helps the asset get viewed more significantly by the market.”

“Significant milestones are often overlooked but may become more important in the future; there is real value if the milestones can cover future development costs so you don’t have to go to other investors.”

Buyers and sellers agree that total deal value may increase over the next 5 years but differ on what will drive the lift (see Figure 7).. 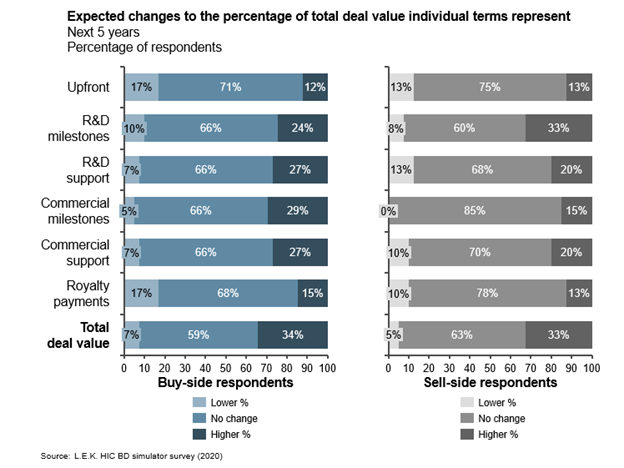 Some of the global, TA-agnostic findings emerging from L.E.K.’s survey of 81 BD professionals suggest healthy interest in continued deal-making and encouraging alignment between buyers and sellers on deal term expectations. Depending on the specific asset attributes and stage of development, the data establishes reliable expectations for initial deal term sheets. 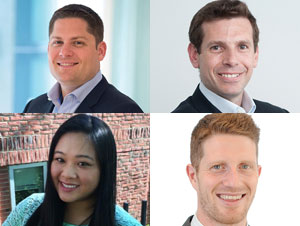