After witnessing a steady decline in the polls due to his handling of the COVID pandemic and racial unrest, President Trump lashed out at the pharmaceutical industry, a bipartisan punching bag.

The orders merely call for future action on the issues and are not self-executing. Yet the most-favored-nation order sent shivers through the pharmaceutical industry, in part because a paper explaining the order was not released. At the press conference announcing the orders, President Trump declared he was holding off on that EO for a month, pending a deal he hoped to strike with the pharmaceutical industry.

The president referenced a meeting with pharmaceutical executives for the following week, yet that never materialized. “I don’t think there is a need right now for White House meetings,” declared Pfizer CEO Albert Bourla on Pfizer’s earnings call. He added the orders “pose enormous distraction” to the biopharma industry as it fights COVID-19.

The table on the following page shows why the industry believes it has no basis to find common ground with a president who believes the U.S. should be entitled to the lowest price in the developed world. Prices in the U.S. would be slashed between 48 and 90 percent for the top-selling Part B drugs.

Instead, the pharmaceutical industry launched an advertising campaign criticizing the president in key battleground states. That elicited three tweets from President Trump in a week calling them “nasty ads” that lied about the impact of his executive orders.

The practical concern of the industry is that Congress ceded much of its authority to the Center for Medicare and Medicaid Innovation (CMMI) — a new agency established by Democrats in the Affordable Care Act.  CMMI can override, disregard, and ignore long-standing statutory and regulatory policy, so long as it is “testing a model.” Nothing in the statute limits the scope or duration of the model; therefore, the model can become de facto Medicare policy.

In October 2018, CMMI issued an “advanced notice of proposed rulemaking” on its intention to test a model that would tie prices of Part B drugs in half the country to an IPI.” Under that proposal, Medicare would pay 120 percent of the index, which would result in substantial cuts, though not as egregious as the most-favored-nation concept now being floated.

Rulemaking on the IPI never went forward, as the Trump administration deferred to Congress to develop prescription drug proposals. But those stalled after the House of Representatives passed partisan legislation and bipartisan legislation stalled in the Senate after initial approval from the Finance Committee last summer.  Democrats walked away from similar legislation Finance Chairman Chuck Grassley (R-IA) introduced last month.

The EO related to most-favored-nation pricing raises the possibility that a CMMI proposed rule, or worse, an interim final rule implementing the policy, may be issued at any time. Even more troubling, the CMMI statute explicitly prohibits “administrative or judicial review,” thereby limiting the industry’s ability to stymie the proposals through the courts.

The other EOs, while not as damaging as international reference pricing, could still be impactful. The order related to Canada importation calls for the completion of the December 2019 rule that would allow states, wholesalers, and pharmacies to import pharmaceuticals from Canada. The comment period for this rule closed March 2020 and the rule has yet to be sent to the Office of Management and Budget for regulatory review. Because the comment period has closed, the final rule can be issued at any time. 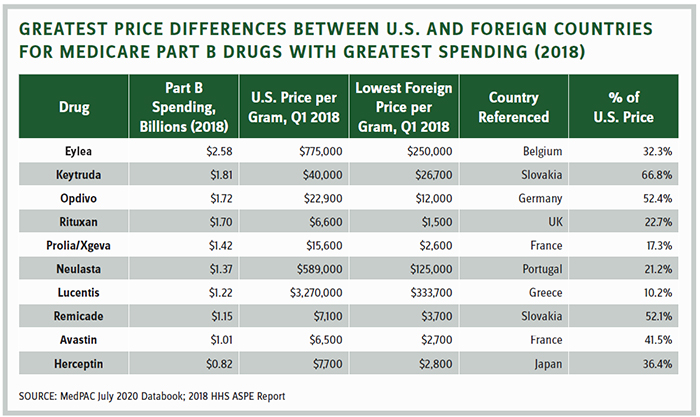 This EO also calls for the completion of the rebate rule released at the end of January 2019, which would eliminate the current safe harbor from the anti-kickback statute for retrospective rebates negotiated by PBMs and plans and replace it with a safe harbor for drug rebates to be passed through to patients at the point of sale. The rule was withdrawn in June 2019.

Those staggering cost estimates were based on the theory that between 15 and 25 percent of negotiated retrospective rebates would not be passed on to the consumer as point-of-sale discounts. Neither OACT nor CBO provided the basis for this assumption, which is perplexing because plans and PBMs would still have all the tools to negotiate price concessions from manufacturers: step therapy, prior authorization, tiering, etc.

It is conceivable that these assumptions may be revisited, but that’s unlikely. The Pharmaceutical Care
Management Association, which represents PBMs, is not taking any chances. It launched its own advertising campaign on Fox News and other outlets hammering the idea that the safe harbor rule could rise from its shallow grave.

The only executive order that seemed to escape pushback was the one that would make insulin and EpiPens more affordable.

As Trump’s one-month deadline for a deal with PhRMA ticks away, nervous pharmaceutical executives are equally dismissive and anxious about the next actions of an often-impulsive president. White-shoe law firms are quietly preparing litigation to attempt to halt implementation of policies that could be devastating to the industry. Meanwhile, industry policy experts are brainstorming policies that could assist patients with their out-of-pocket costs before the election without upending the supply chain or ingrained business models.

Will the president move on to more tempting political targets? Will he realize that the best chance to defeat the global pandemic, return to normalcy, and grow the economy is to work with the industry on vaccines and therapies?