As 2013 draws to a close, many of us are wondering what surprises 2014 may bring in the drug development industry. Having a look back at some trends from the past year offers insight into potential changes to come. An important trend demonstrated by buyers of outsourced services was an increase in anticipated spending on outsourcing over the prior year illustrated by the 7 percent upturn among respondents with expenditure between $10M and $50M per year and a corresponding drop in the percentage of respondents whose outsourcing expenditure was under $10M. This increase in expenditure also occurred without a corresponding increase in the overall number of projects or services outsourced. Nice Insight anticipates outsourcing spending to continue to rise modestly in 2014, chiefly because it translates to reduced internal costs.

For the past two years, research data has shown that quality (1) and reliability (2) consistently rank highest among the six key drivers of partner selection. This ranking isn’t likely to change in 2014, even though there has been some shuffling in the rankings of other attributes — namely a rise in the importance placed on regulatory track record and a decrease in prioritization of affordability. The CRO and CMO benchmarks for quality and reliability increased by 1 percent and 3 percent respectively from 2012 to 2013, suggesting that these groups recognized the importance of the key drivers in the eyes of buyers and are making an effort to improve accordingly. It will be interesting to see whether there’s another increase in these benchmarks in 2014.

The decline in the perceived importance of affordability when selecting an outsourcing partner to fourth position in 2013 was mirrored by findings from several customresearch projects focused specifically on pricing. It reflects the broader value that a good relationship with a CRO or CMO can bring beyond cost savings, such as the ability to focus on core competencies, access to scientific expertise, and increased productivity. Respondents expressed some pitfalls that occur when too much emphasis is placed on price up front — namely, the frequency of add-on charges or change orders that result in delays. In light of this, it is likely that affordability will continue to decline in priority. The question is, will innovation or productivity take its place?

Regulatory Importance Rises
Over the past year there has been an increase in the importance placed on a company’s regulatory track record, climbing from fifth position in 2012 to third in 2013. During both 2012 and 2013, a quarter of survey respondents confirmed that their company would engage a CRO or CMO for regulatory support, making this service the fifth most popular in 2012, rising to fourth in 2013. This escalation came shortly after a few well-respected companies received FDA warnings, or worse, product recalls. Nice Insight anticipates regulatory compliance remaining in the top three partner selection drivers in 2014, alongside quality and reliability. The question will be whether sponsors continue to engage CROs and CMOs for regulatory support at such a high rate, or if the challenges of the past few years will prompt innovators to rely more on internal regulatory expertise.

The consistent prioritization of quality and reliability and the escalation in demand for regulatory expertise undoubtedly relate to some well-publicized issues over the last few years, and perhaps some increased scrutiny. As ever, this creates opportunity for companies that approach the circumstances proactively. Drug innovators should seek out the contract service providers that are able to position themselves accordingly for a winning partnership in the year ahead. 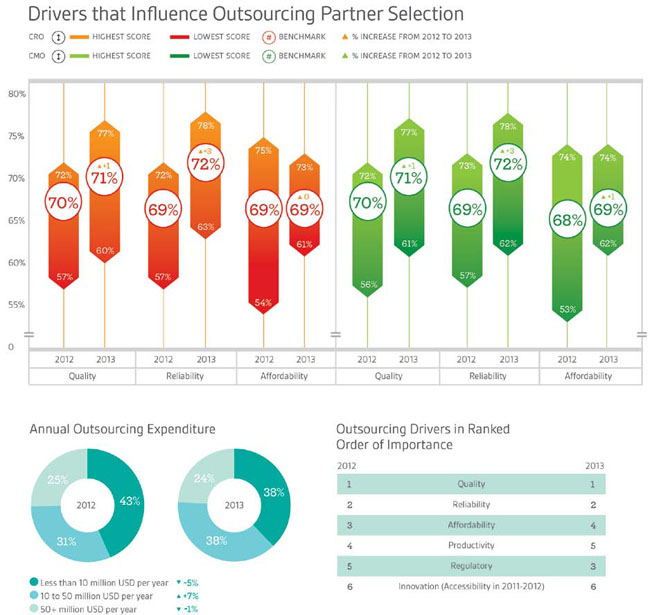 Survey Methodology: The Nice Insight Pharmaceutical and Biotechnology Survey is deployed to outsourcing-facing pharmaceutical and biotechnology executives. The 2012-2013 report includes responses from 10,036 participants. The survey is composed of 500+ questions and randomly presents ~30 questions to each respondent in order to collect baseline information with respect to customer awareness and customer perceptions on the top 100+ CMOs and top 50+ CROs servicing the drug development cycle. Over 900 marketing communications, including branding, websites, print advertisements, corporate literature, and trade show booths are reviewed by our panel of respondents. Five levels of awareness from “I’ve never heard of them” to “I’ve worked with them” factor into the overall customer awareness score. The customer perception score is based on six drivers in outsourcing: Quality, Innovation, Regulatory Track Record, Affordability, Productivity, and Reliability.