Will Protagonist Be The Hero In Making Stable Oral Peptides To Replace Injectables?

SNAPSHOT
Protagonist Therapeutics has created a technology for making stable oral peptides capable of replacing injectable-only drugs and is developing entirely new oral-peptide therapeutics  or GI patients. Its initial development areas are irritable bowel diseases (IBD) and irritable bowel syndrome (IBS). Two compounds, one an injectable peptide to block IL-6, and another, an oral peptide to block integrins, will enter clinical trials in 2015.

WHAT’S AT STAKE
Protagonist, like many originator companies, took years to develop a platform, but all along it intended to develop its own drug treatments with its oral-peptide technology rather than become a CMO. So its contributions could be earthshaking in two ways — offering a long-sought alternative to existing injectable antibodies and peptides, as well as unleashing a new breed of oral medicines with superior potency and safety — and in the company’s words, convenience, compliance, and affordability.

In between the world of small molecules and proteins is the realm of peptides: essentially strings of amino acids with unique therapeutic potential, but, in the traditional oral formulations, peptides have serious drawbacks in stability and pharmacokinetic properties. “Our intent is to create novel chemical entities that will capture the best of both worlds, meaning the convenience and PK (pharmacokinetics) characteristics of small molecules including oral delivery and oral stability, and the important potency characteristics of big biologics, meaning the ability to work with large protein-to-protein interaction targets,” says Protagonist President and CEO Dinesh Patel. In the company’s research, such targets include IL-6, IL-23, TNF, and integrins.

The GI areas — IBD and IBS — are natural candidates for drug development, considering that the first hurdle for oral peptides is the gut. “For us, IBD is not like a secondary application; it is the primary application, and we have chosen it on purpose so that we can capture the full advantages of an orally delivered peptide drug,” Patel says.

Protagonist is not alone in this field, nor even the furthest ahead in oral-peptide drug development. Roche is partnering with Chiasma on an oral somatostatin analog using the smaller company’s Transient Permeability Enhancer (TPE) platform. Enteris BioPharma recently resurrected the Peptelligence platform acquired from Unigene. And Ironwood Pharmaceuticals, which has partnered with Protagonist since 2011, has already launched linaclotide, a once-daily oral peptide GCC agonist for constipation-dominated IBS. Others have sought the oral-peptide answer in protease inhibitors, permeation enhancers, nanoparticles, liquid emulsions, water-oil microemulsions, and liposomes.

Patel has this to say about his company’s position in the field: “Healthy competition is not a bad thing, and we are glad to see a strong interest in the field of oral peptides. While almost all of our competition has embarked on various formulation strategies, Protagonist has leveraged its proprietary technology platform to uncover peptidic new chemical entities (NCEs) that are both potent and orally stable.”

Patel adds that both of Protagonist’s partners, Ironwood and Zealand Pharma, saw his company’s platform as “complementary and synergistic” to their own expertise and experience. “These collaborations are the first important validation of Protagonist’s technology. The next step is funneling peptidic assets into all of our companies’ internal clinical pipelines.” 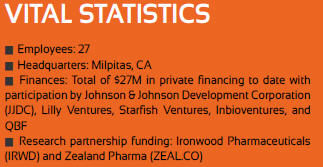 Regardless of who wins the race to the top of a future oral-peptide pack, some reports in the press have been unjustifiably blasé about the new technologies. One recent analysis regards the Protagonist platform as offering just another alternative in drug delivery, apparently missing the plain fact that the world has eagerly waited for the oral solution to injectable peptide limitations. Oral-peptide delivery will be a major breakthrough, not an incremental improvement.