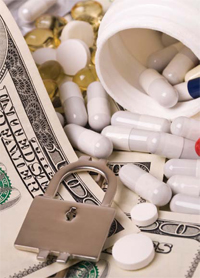 The security and integrity of drugs and medical devices are a growing concern to supply chain and logistics executives in the life sciences industry, according to a 2012 survey of 375 pharmaceutical, biotech, and medical device company officials. In 2008, when the annual survey began, only 13% of the life science executives who were questioned identified the protection of their products during transit, storage, distribution, delivery, and sale as a top supply chain concern.

During the past five years, the respondents who said that they were worried about product protection have more than quadrupled to 57%, according to the latest survey, which was conducted in April and May 2012. Product protection, which covers damage and spoilage as well as security, is one of the fastest growing concerns of respondents in the blind, in-depth “Pain in the (Supply) Chain” survey, which is sponsored by UPS, the international delivery and logistics company. The market research company TNS conducted the survey for UPS. The UPS survey also revealed that a related topic, IP protection, is receiving more attention from supply chain decision makers. Over the past three years, the respondents ranking IP as a top general business issue have grown from 40% in 2010 to 48% in 2012.

“Globalization has made IP more important to biopharmaceutical companies,” said Craig Audet, senior VP, operations and head of global regulatory affairs at San Diego-based Arena Pharmaceuticals, whose weight-loss drug BELVIQ was approved by the FDA in 2012. To safeguard the IP on BELVIQ, Audet said that in the years preceding the submission of the NDA for the drug, Arena “was very focused on obtaining compositionof- matter patents in 98% of the world’s countries.”

According to the 2012 UPS survey, supply chain leaders in Asia are the most worried about product damage and spoilage, while their counterparts in the U.S. and Western Europe are more concerned with regulatory compliance and cost containment. However, leaders in all areas said protection of their products in emerging markets was a major focus.

The rising importance of product protection, like IP, is due in large part to both globalization and the increasing sensitivity of healthcare products, said Scott Szwast, healthcare segment director at UPS. Other contributors include a larger and more diversified customer base and the increased number of controlled substances and higher value drugs and medical devices now in the supply chain. “The longer supply chains of the global market create more situations where product can be at risk, both for temperature excursion and for thieves seeking to sell healthcare products, particularly controlled substances,” said Szwast. And with the growth of outpatient surgical centers and other alternate care locations, more controlled substances are in the supply chain, he added. “In the last decade, product theft and counterfeiting have increased by 34%.”

According to news reports, an estimated $80 million in drugs were stolen in the largest pharmaceutical heist in U.S. history, which occurred in 2010 at an Eli Lilly and Company warehouse in Connecticut.

Global Supply Chain Created Higher Risk for Product Damage
In the survey, Asian and Latin American leaders ranked product damage and spoilage as one of the top three supply chain issues. For their counterparts in North America and Europe, damage and spoilage are among the top five issues. The likelihood that products will be damaged or spoiled has increased because globalization has created longer supply chains and thereby more opportunities for reducing product integrity, and the products have become more sensitive, according to UPS.

According to the survey, only 41% of the supply chain leaders said they successfully managed their supply chain costs. “Concerns around regulatory compliance and cost management have been constants for healthcare supply chain decision makers over the past five years, while we’ve seen growth in concern around areas such as product security and product protection,” said Szwast. 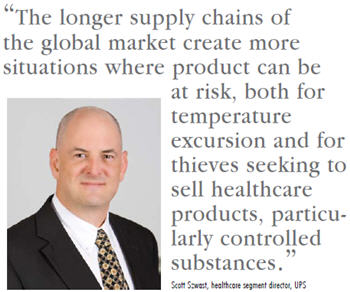 When the executives were asked to identify the number one barrier to global expansion, the regulatory landscape received the most votes. A total of 46% of the 2012 survey respondents ranked country regulations as the number one barrier. However, 77% of the executives reported their companies had tapped into new global markets in the past 18 months, and 83% said their companies planned to invest over the next three to five years in expanding their markets, particularly in China, Brazil, India, and the U.S.

The survey also revealed that the executives planned to invest in advanced technologies to improve the management of their supply chains. A total of 83% of the respondents said that they would invest in technologies including order management, Web ordering, serialization/e-pedigree or track-and-trace, and security-specific and temperature-sensitive technologies. Such technologies have become essential to managing a supply chain because the customer base is no longer primarily hospitals and pharmacies, but also nursing homes, doctors’ offices, outpatient medical and surgical clinics, and even patients’ homes, Szwast noted.

“The customer base is a larger and more diversified market,” he explained and added that it’s also more global, with countries outside the U.S. now responsible for almost 60% of today’s demand for healthcare products. That means supply chain executives are under pressure to serve customers worldwide, while complying with a growing number of regulatory requirements in the U.S. and other countries and keeping their costs down, Szwast pointed out.

Supply Chain Should Be Tailored to Each "Patient Universe"
To cope with these pressures, supply chain decision makers should be more collaborative, adopt segment-based supply chains, and leverage new innovative models and technologies such as order management software. “They should work with suppliers as well as their customers to exchange information,” Szwast said and added that the supply chain should be tailored to the “patient universe” for each product.

“The healthcare supply chain too often has been one-size-fits-all,” said Szwast, despite “an expanding patient universe,” which now ranges from senior citizens with chronic diseases treated with mass-market prescription and generic drugs to patients with cancers that depend on biologics, many of which are temperature-sensitive and thus require constant temperature control from manufacturing to administration.

Industry leaders are realizing that their supply chains can affect their companies’ bottom lines. “Companies that are regarded by their industry peers as having best-in-class supply chains outperform by 7% to 26% their peer groups in terms of market capitalization,” said Szwast. “And, studies have shown that supply chain management directly impacts 75% of a company’s business operating costs.”

Since BELVIQ is Arena’s first product to receive FDA approval, the company had the opportunity to create a new supply chain from the ground up. However, Arena decided to partner with another biopharmaceutical company, Eisai Inc., with an established system and substantial experience in shipping, storage, distribution, and delivery of drugs.

Eisai will pick up the boxes of BELVIQ in containers from the dock of the Arena manufacturing plant in Switzerland. “In the future when we have more products, we may develop our own supply chain,” Audet added. “But for now, we’re pleased to collaborate with a pharmaceutical company with expertise in this area.”