After a six-week recess (ahem, “district work period”), Congress is finally reconvening to commence work on drug-pricing legislation. A combination of populist ire over rising out-of-pocket drug costs and left-wing antipathy for for-profit healthcare has fueled legislation that would fundamentally rewrite the Medicare and Medicaid prescription drug programs.

But stepping back from the political hyperbole driving the prescription-drug debate, one finds that American taxpayers, patients, and employers spend far more on hospitals than pharmaceuticals. Yet hospitals receive very little scrutiny of their escalating costs and increasing number of mergers and acquisitions that have been shown to drive costs still higher.

One reason is that patients pay a much greater portion of the cost for their prescription drugs than for their hospital care. National Health Expenditure data from 2017 showed that of the $1.143 trillion of spending on hospitals just $34 billion, or 2.9 percent, was paid out-of-pocket by the patient. In contrast, patients spent more out-of-pocket on their prescription drugs in absolute terms ($47 billion) even though hospital spending dwarfed the $333 billion spent on pharmaceuticals, because they are picking up 14 percent of the tab.

This means most Americans have a distorted view of what is driving costs in the healthcare system. 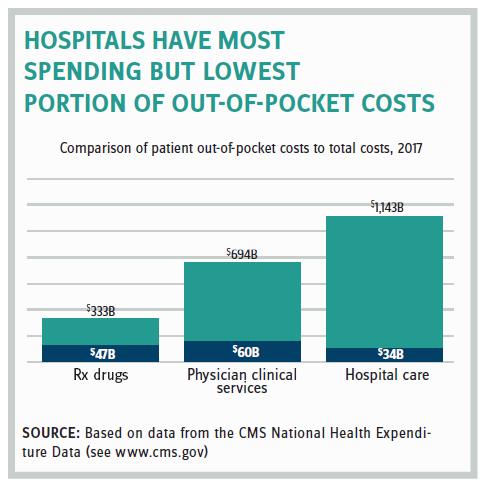 In politics, perceptions are often more important than facts, particularly when they can be easily demagogued. It is much easier for politicians to vilify distant drug companies that are concentrated in a select few geographic areas than the local hospital that is seen as providing essential care as well as a critical job infrastructure for the community.

It does not matter that hospitals are 33 percent of the healthcare spend and retail prescription drugs are around 10 percent.

Indeed, the Democratic presidential candidates spent much of the summer bashing the drug and insurance industries, while generally staying mum on the sector that generates far more costs and whose recent consolidations should be a cause of concern.

Of course, it is one thing to observe that hospitals are a large share of the total spend. But policymakers are rightfully more concerned about the trajectory of that spend and cost drivers propelling spending up or down.

The study concludes, “Because hospital prices accounted for a larger share of total cost of services and grew more quickly over time compared to physician prices, the majority of the growth in total price of care was driven by growth in facility prices.”

Hospitals have focused on acquiring physician practices because that strategy simultaneously quashes competition in the local market (for services such as colonoscopies, cataract removal, imaging, and radiation therapy) and creates downstream revenue through referrals on surgery and ancillary services. The revenue physicians generate far surpasses the cost of the employed physician’s salary as documented in Merritt Hawkins’ 2019 Physician Inpatient/Outpatient Revenue Survey.

We may have hit a tipping point as the proportion of independent physicians has steadily dropped from 48.5 percent in 2012 to 31.4 percent in 2018.

The Trump administration has advanced policies that increase healthcare cost transparency and could help drive care into more efficient settings than hospitals. The latest initiative would require hospitals to post online in a consumer-friendly manner standard charges for items and services as well as their negotiated rates with insurance companies.  The policy would apply to 300 shoppable services (70 are defined by CMS including blood tests, MRIs, and ultrasounds while 230 are hospital-selected). If a hospital fails to disclose, the penalties can be up to $300 per day and $109,500 per year.

Hospitals and insurers are likely to sue if the final rule goes into effect. The American Hospital Association (AHA) already released a statement that this proposed rule “exceeds the administration’s legal authority and should be abandoned.” The insurance industry also has weighed in against the proposal, claiming that disclosing privately negotiated rates will make it harder for them to bargain for lower rates.

This policy comes at the heels of the Trump administration advancing site-neutral payment policies, further putting pressure on the hospitals. Last fall, CMS finalized its proposal to pay clinical visits at the hospital at the lower physician fee schedule rate, saving Medicare $380 million annually. This spring, CMS proposed continuing this site-neutral phase-in, which will save the Medicare program $650 million in 2020 and beneficiaries $160 million in lower copayments. Hospital associations also have  pursued legal action to block implementation.

Reform Of Fraud And Abuse Laws That Stifle Competition

Earlier this year Health and Human Services issued a request for information seeking ideas to reform the Anti-Kickback Statute as well as the Stark self-referral law, citing its antiquated approach to coordinated care. The law currently prohibits physician practices from remunerating their physicians based on “volume or value,” which clearly undermines incentivizing adherence to treatment pathways by paying based on “value.”

A proposed rule is now pending at the Office of Management and Budget and expected to be released this fall that would reportedly flex up implementation of those statutes to permit value-based arrangements in the context of alternative payment models. That would be a lifeline to independent practices that were shut out of accountable care organizations, which were provided such waivers under the Affordable Care Act and now have more than 10 million Medicare beneficiaries enrolled. This may flex things up at the agency and encourage them to start approving the dozens of alternative payment models that have been submitted for review and testing.

An invigorated counterbalance to hospitals is needed that would allow independent practices to compete on a level playing field and offer more and better services at less cost to an informed consumer. Congress is unlikely to cut reimbursement to hospitals because of their lobbying might. But improving competition and educating consumers on less-expensive treatment options are great ways to generate savings over the long term.