In an incredible show of profligacy, Republicans forsook any notion of fiscal conservatism by substantially increasing discretionary spending by over $2 trillion over the next decade, less than two months after cutting taxes by $1.5 trillion over that same time period.

The Bipartisan Budget Act of 2018 busts the budget caps negotiated by then Speaker John Boehner (R-OH) in 2011 when the Republicans retook Congress and declared war on excessive spending. Republicans agreed to $150 billion in extra domestic discretionary spending for the next two years that Democrats demanded, in order to secure that same amount for the military.  But this $300 billion of higher spending will establish a new baseline that will create demands for sustained spending at the level leading to an extra $1.8 trillion over the next 10 years or over $2 trillion when factoring in the increased interest payments for this debt.

The Congressional Budget Office (CBO) reports that the deal will increase next year’s deficit to $1.2 trillion and annual deficits over $1 trillion will remain indefinitely. If the spending is made permanent, deficits will rise to $1.7 trillion annually. This is at a time of 4.1 percent unemployment — a 19-year low — and GDP growth of a healthy, though not spectacular, 2.6 percent. What happens if the country falls into a recession where tax revenue would collapse and automatic spending on programs for the uninsured and indigent would increase?

It is hard to understand how Speaker Paul Ryan (R-Wisc.), whose acumen and experience on the federal budget through his chairmanship of the Budget and Ways & Means committees agreed to the deal. More troubling is why 167 House Republicans voted yes with only 67 no, and in the Senate, 34 Republicans voted for it with only 16 against. Trump has transformed the party in less than a year!

Rx Provision Undermines Part D
The budget deal also included a last-minute provision that caught the pharmaceutical industry off-guard, which raises the 50 percent required discount (read: price control) to 70 percent on name brand drugs in the Medicare Part D coverage gap. The discount applies after a beneficiary’s total costs exceed $3,750 and until the catastrophic benefit applies. In essence, the provision transfers risk from the Medicare Part D plans that are on track to cover 25 percent of costs in the coverage gap to the pharmaceutical industry. (The 50 percent discount was added by Obamacare along with a gradual ramping up of plan coverage to 25 percent.)

It was a curious and vexing provision for Republicans to add to an already fundamentally flawed bill. A couple years after Obamacare’s enactment, President Obama had proposed supplanting plan coverage entirely in the coverage gap by hiking brand-name discounts to 75 percent. But that proposal went nowhere (particularly when Senator Bernie Sanders championed it) under Republican Congresses, who were unwilling to open up Medicare Part D, a cherished item of market-based pride for the party.

However, that philosophical defense of private delivery appeared to be thrown out the window along with any notion of fiscal restraint when Congress enacted the 2018 Budget Act.

The provision produced $10 billion of savings to the federal government over 10 years, but industry analysts are still assessing the full implications of the new law, and initial estimates peg the true impact as perhaps four times that amount due to complicated pricing interactions and ripple effects.

A silver lining, small as it may be, is that the new law will reduce the catastrophic threshold, where 95 percent of costs are covered, by $741 because manufacturer discounts are counted toward the catastrophic threshold but plan coverage is not. Premiums are also expected to go down because the Part D plans will be covering a scant 5 percent of costs in the coverage gap. But it begs the question, what is the role of private plans in Part D if the government is ever-more reliant on arbitrary price controls?

Trump FY 2019 Budget Rx Drug Proposals
That premium reduction may give the Trump administration room to implement a recently accounted proposal to require one-third of retrospective manufacturer rebates in Part D to be passed on to beneficiaries at the point of sale.

Last fall, CMS had requested stakeholder feedback to the point-of-sale proposal, citing troubling evidence that the retrospective manufacturer rebates that had grown rapidly in recent years were distorting the market and leaving patients with inflated out-of-pocket costs at the pharmacy counter. The primary substantive concern raised in opposition to such a reform was the potential impact on plan premiums from the removal of these back-end resources. With the unexpected premium reduction in 2019 that results from the reduced plan liability, CMS has greater flexibility to initiate the point-of-sale reform with little disruption to beneficiaries’ premiums.

The Trump budget, released just a couple days after enactment of the Budget Act, represents a mixed bag for the pharmaceutical industry. Of most concern is a proposal to exclude manufacturer discounts (now pegged at 70 percent) from counting toward the catastrophic, saving the federal government $47 billion over 10 years and more than doubling the catastrophic threshold. That proposal has been circulated by the Medicare Payment Advisory Commission (MedPAC) for several years and has failed to get traction due to unified beneficiary and pharmaceutical industry opposition. The administration also recommends a related MedPAC proposal of eliminating the 5 percent beneficiary copay in catastrophic and shifting responsibility of coverage for that benefit from Medicare to the Part D plans that administer the benefit.

The Trump budget also would provide plans with greater leverage to negotiate formularies by reducing the number of drugs in a therapeutic class from two to one, which is projected to save $5.5 billion over 10 years.

But the president’s budget does not suggest any fundamental reforms to the entitlements driving federal spending growth and certainly shows no concern with the ballooning debt from the tax and budget bills recently signed into law.

It is unclear if Republicans will ever return to the more predictable views of fiscal restraint and a market-based approach to healthcare. 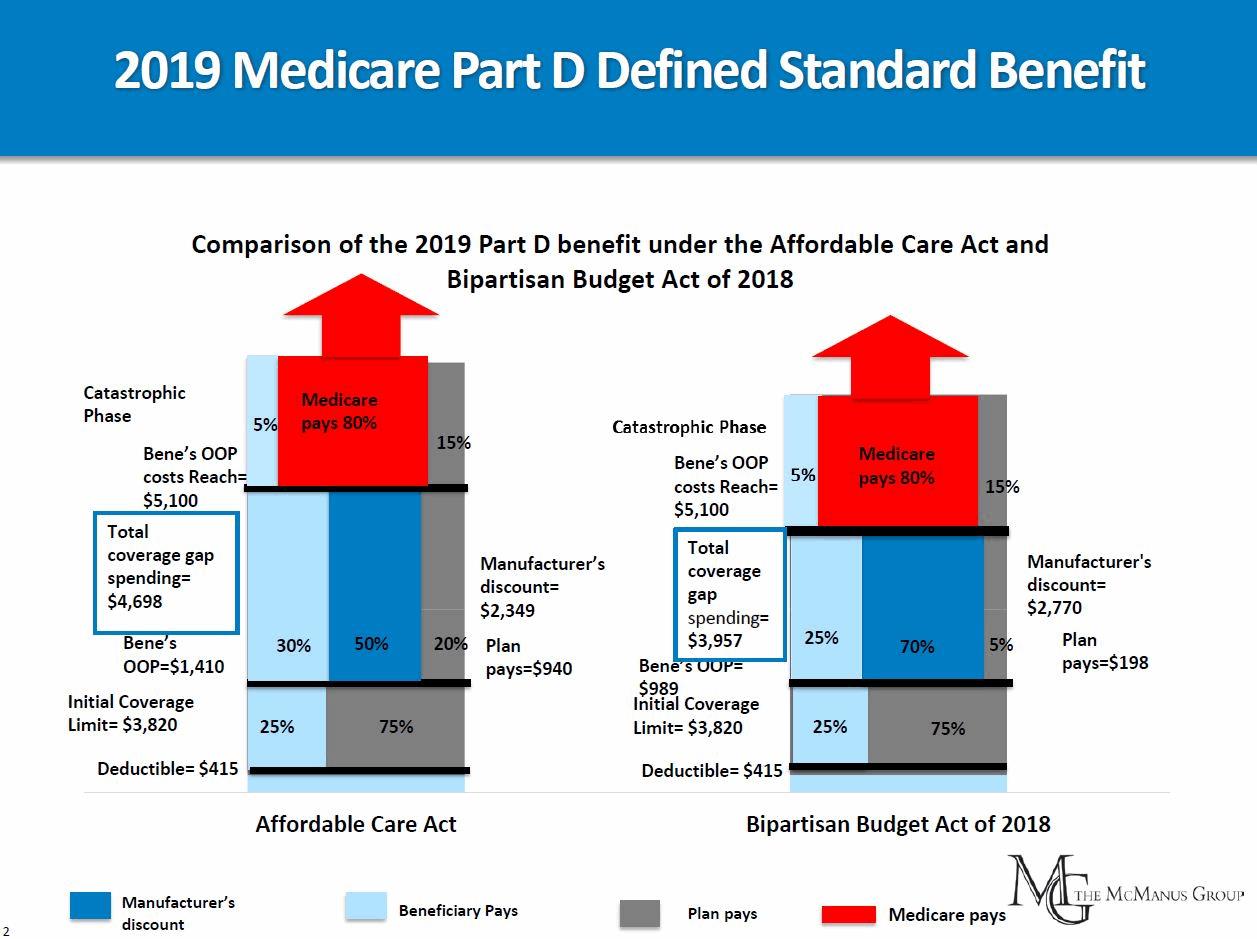