The 340B Discount Program is In Dire Need Of Reform

How does a program created to assist low-income, uninsured patients with their drug costs become a boondoggle worth millions of dollars to wellfinanced university hospitals that serve few indigent or uninsured patients? That’s what a congressional investigation led by Senator Chuck Grassley (R-IA), ranking member of the Judiciary Committee, wants to know.

Senator Grassley discovered that, last year, under the socalled “340B program,” Duke University Hospital was able to pocket a $48.3 million profit from outpatient drugs it sold to primarily privately insured patients. Two-thirds of Duke’s patients are privately insured, and only 5% are uninsured. Yet Duke received statutorily mandated discounts on all the outpatient drugs it provided to all of its patients regardless of whether they were insured or not. In other words, it then sells those drugs to insured patients at a substantial markup. Interestingly, Duke provided just $35 million in charity care —- or substantially less than the revenue it amassed under the 340B program, even though it is characterized as a nonprofit and exempt from taxes.

Duke University hospital’s exploitation of the 340B program is not an isolated incident. It represents the norm. And it is perfectly legal, though clearly not at all appropriate.

A little more than two decades ago, Congress enacted a program called 340B to require pharmaceutical manufacturers to provide discounted drugs to “safety-net” public health clinics serving uninsured and low-income patients and certain not-for-profit, disproportionate share hospitals (DSHs). Ironically, the DSH formula doesn’t measure charity care but instead measures how many Medicaid- and Medicare-insured in-patients the hospital treats. Manufacturers are required to provide discounts equal to the Medicaid rebate to these qualified entities. These discounts vary across products but average about 45%, and for some products they are so substantial that the hospital actually acquires the drug for a penny!

For years the program garnered little attention, but its recent explosive growth has sparked congressional interest. A Government Accountability Office (GAO) report issued in 2011 found that the Health Resources Service Administration (HRSA), which administers the program, provided little oversight. GAO discovered that HRSA had never performed an audit, relied on self-policing by 340B participants, and failed to periodically confirm eligibility for all covered entities or even inquire whether they have a system in place to prevent diversion.

With the help of private vendors seeking to exploit the price delta between the statutorily mandated discount prices and market prices of expensive new chemotherapy drugs, the 340B program exploded in the last half of the last decade. Indeed, between 2005 and 2011, the number of qualified entities tripled from 591 to 1,673, and the number of hospital sites quadrupled. Today, about one-third of all hospitals participate.

Healthcare reform will result in even greater expansion of the program because the number of Medicaid patients a hospital serves is a key criterion for triggering 340B eligibility. As health reform is projected to increase Medicaid enrollment by about 50%, the number of hospitals that can qualify for 340B status will multiply. This raises a curious question: If healthcare reform produces more insured patients, shouldn’t a program intended to assist the uninsured shrink commensurately, not grow commensurately?

In addition, hospitals and other entities that had already received the 340B designation also benefited from an unrelated negotiation in the bill. When the pharmaceutical industry agreed to a 53% hike of the minimum Medicaid rebate to help finance health reform (increasing it from 15.1% to 23.1%), 340B hospitals enjoyed a windfall in steeper discounts because those discounts are tied to the size of the Medicaid rebate.

In addition, 340B hospitals have stretched the definition of “patient.” GAO expressed concern that many 340B hospitals were determining individuals eligible for 340B discounts who were only loosely affiliated with the institution and not actually receiving care there. Certain 340B hospitals have even argued that their own employees should qualify as eligible patients.

It should be no surprise that the Berkeley Research Group, which conducted an in-depth analysis of the program, projects drug purchases under the 340B program will double from $6 billion in 2010 to $12 billion in 2016, and the estimated discounts will escalate from $2.2 billion to $4.4 billion in the same period. Keep in mind: The discounts were just $1 billion in 2005. 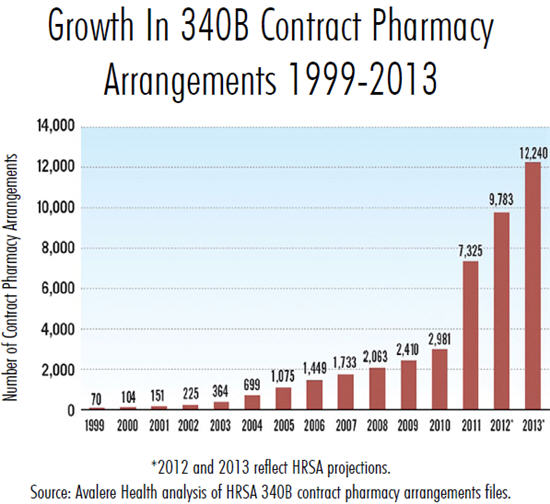 Of course, program expansion of this magnitude will have substantial economic and policy ramifications. Community oncology clinics are finding it increasingly challenging to compete with 340B hospitals and their multiple contract pharmacies. This is particularly troubling, because as documented in Steven Brill’s insightful Time magazine piece, “Why Medical Bills are Killing Us,” hospitals have already consolidated market share in many communities, allowing them to demand huge markups from commercial insurers. The 340B program exacerbates this consolidation and anticompetitive behavior.

Certain Medicare Advantage plans now require their patients to obtain their prescriptions at select 340B hospitals that may require hours of driving even though community clinics are available in their area. Nondiscrimination rules under the 340B program prohibit manufacturers from withholding product from 340B entities, and their stockpiling of product has often resulted in drug shortages to community clinics.

What Should Be Done?
First, greater transparency is required. The 340B hospitals and other participants should be required to disclose the extent of the discounts they receive and what patients (privately insured, Medicare beneficiaries, and the uninsured) are receiving those drugs. The disclosure should include whether the discounts were passed on to the consumer and how hospitals are using the resources they’ve garnered ostensibly to assist poor and uninsured patients. Senator Grassley’s investigation is just the tip of the iceberg.

Second, Congress should return the program to its original intent. Discounts should not flow to all patients of eligible 340B entities. Rather, the discounts should flow to the patients who need assistance —- the poor and uninsured who receive care at those entities. There simply is no justifiable policy argument for a government program that enables hospitals to produce massive profits on the backs of Medicare beneficiaries for care financed by the taxpayers and our seniors.

This will require real inventory management by hospitals to parse discounted drugs for eligible patients from marketpriced drugs for those with healthcare coverage. It will also require greater accountability of 340B hospitals. But if they are going to claim they are nonprofit and forgo paying taxes because they service the community, Congress should ensure that the indigent uninsured patients in the community actually benefit from this drug-discount program.