A Bullish Season At The Time BIO Investors Forum

To tweet or take notes — that was the question at this fast-paced, multitracked round of company pitches and plenary sessions that filled two whole days in the City by the Bay during October. As it happened, my tweets at #BIF13, along with selected input from others in the “hashtag” group for the BIO Investor Forum (BIF), yielded all the notes I needed. 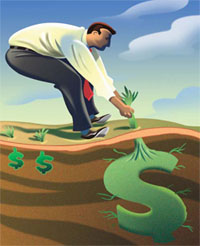 Those notes play out some general themes, along with specific company details that, all together, reflect the unique mood and makeup of this year’s forum. Enthusiasm ran high, in sharp contrast to the past half decade of down times in angel/VC funding and IPO action for the life sciences industry. Yet caution remained on everyone’s mind, and many people’s lips, amidst the celebratory feelings.

Although partnering still held primary importance at BIF, a subtle but palpable shift back to investor funding appeared in the content of plenary sessions and types of companies in the lineup. Perhaps the shift at least partly accounted for the reduced proportion of targeted cancer drugs presented, with noticeably more time given to noncancer conditions and new cancertreatment modes such as RNA-based (ribonucleic acid) and immunological therapies. In fact, the RNA and immunology approaches spilled over into other areas such as anti-infectives.

INVOKING CANCER IMMUNITY
Cancer immunotherapy combinations gained support in a related panel discussion by executives and scientists from Bavarian Nordic, Inovio, immatics biotechnologies, and the UCSF Medical Center. Panelists answered some sophisticated technical questions regarding the side effects, variety of approaches, and need for carefully managed combinations of immunotherapies to rally all the right forces in the immune system. Including the still-elusive multipatient cancer vaccine, such “mass immunotherapy” — moving immunotherapy away from patientcustomized treatment to something more like the normal drug or vaccine supply chain — is likely the wave of the future.

A number of presenting companies are developing immune-based therapies, including therapeutic vaccines. Alas, I could not cover them all, but I managed to hit a somewhat random half dozen that suggest the range of approaches and areas companies are exploring.

Immune Design threw me off at first by using the term “tumor-specific” to describe the MOA (mechanism of action) of its cancer vax technology. Rather than a patient-specific vaccination like Provenge, however, Immune Design’s vaccines target dermal dendritic cells (DCs) in vivo to stimulate production of cytotoxic T lymphocytes (CTLs) that home in on antigens commonly expressed in certain tumor types. Thus, they would be deployed as any conventional vaccine.

MabVax Therapeutics has produced polyvalent vaccines from monovalent forms in-licensed from the Livingston research team at MSKCC (Memorial Sloan- Kettering Cancer Center). The vaccines are based on pooled samples to identify antigens typically expressed in adjuvant (postsurgical or chemo) settings, which is where the vaccinations will occur. Another MabVax program is mining antigens from successfully immunized patients as targets for future therapeutic antibodies.

Similarly, Galena Biopharma aims to vaccinate patients against circulating cancer cells to prevent recurrence, but using a peptide to induce immune response, starting in breast-cancer patients with the HER2 (human epidermal growth factor receptor 2) mutation but not indicated for Herceptin. Galena has also hedged its bets by licensing and marketing a sublingual cancer-pain drug. I got the impression both MabVax and Galena are lone wolves operating outside the emerging comboimmunotherapy consensus.

On the other hand, Lion Biopharmaceuticals and its now-parent Genesis Biopharma believe patientspecific T-cell stimulation and enhancement — “autologous cell therapy” or “adoptive T-cell therapy” — are the only viable solutions for tumor heterogeneity and immune suppression, considering the relatively weak response to ipilumimab and other CTLA (cytotoxic T-lymphocyte antigen) or PD-1 (programmed death) inhibitors that “take the brakes” off T-cell production (also the rationale for combination therapies). But it remains to be seen if such a complex “regenerative medicine” model can translate to a practical business proposition.

But of course the RNA crowd is not alone. I offered this tweet in the midst of the cancerrelated presentations: “All new cancer drugs invoke the same sad memory of this: ‘We’ve cured cancer thousands of times — in mice!’”

DISEASE-AREA DIVERSITY
Another notable trend at BIF this year was the greater representation of non-cancer-niche orphan drugs. Cancer and cancer niches have dominated past events because of the dominant interest of Big Pharma in oncology partnerships. In fact, orphan drugs or not, it was refreshing to see a more diverse lineup of companies in general this year.

Oxthera is developing its lead product Oxabact for hyperoxaluria, which creates stones and damages liver cells, possibly to prevent dialysis or transplant. It is seeking FDA accelerated-review status for the drug, now in Phase 2, because there is no other treatment option for patients.

ContraFect, which like many VC-founded start-ups that sport a board and management full of ex-Big Pharma execs, is going for the (blockbuster) gold with a lead drug to fight blood-borne infections.

Labrys Biologics is going up against Amgen, Alder, and Arteus in chronic migraine with a mAb to block binding of human CGRP (calcitonin gene-related peptide) to the CGRP receptor, which causes vasodilation — saying the more than four million chronic patients represent the major unmet need in migraine. Toxicology is a big issue in chronic care, and Labrys’ LBR-101 looks good in preclinical tox studies; now, on to Phase 1.

Zafgen’s beloranid, having yielded supporting data from a Phase 2 study in obesity, uses the MOA of reducing weight, inflammation, and cardiovascular disease by changing how the body processes fat. Weight loss and cardiometabolic data served as biomarkers to make a strong, if early, case for the drug. Zafgen plans to launch beloranid with narrow labeling for severe obesity, then expand to cardiometabolic disease — a classic case of an orphan- or niche-drug’s potential to open up a blockbuster space.

Aquinox seeks to correct disorders in the blood and immune systems by activating or inhibiting the SHIP-1 (SH2-containing inositol 5-phosphatase) enzyme, which regulates a key blood-cell pathway. The company wants to first introduce its lead drug with an indication for the rare bladder inflammation, Cystitis/Bladder Pain Syndrome, then expand the labeling to COPD. Small beauty to big bonanza — a start-up’s dream.

Proteon Therapeutics is addressing a common problem; disease mortality and morbidity are often related to secondary conditions rather than the primary disease that often gets the blame. In this case, the condition is dialysis access-site failure, one of the most harmful and potentially deadly complications of kidney disease. Proteon’s drug PRT-201 prevents or delays decay of the tissue in the surgically prepared dialysis entry site.

The world has long awaited stable oral peptides as a potential replacement for many injected drugs. Will Protagonist Therapeutics be the hero? The company is aiming for the first logical target of opportunity, the GI tract, with one of its new-generation peptides capable of storage and oral delivery.

PLENARIES IN PLENTITUDE
Besides the cancer immunotherapy panel, I attended several of the many plenary sessions, workshops, and roundtables at BIF that got people talking about the wider context and major influences on the business they are there to develop. Particularly topical were the funding-related sessions described in the following:

“IPO Frenzy: Are the GoGo Markets Here to Stay?” gave a roundup by an expert panel of venture-fund partners. In the past year, the panel agreed, although life sciences funding continued to decline as a whole, the small-cap sector did fairly well, sparking an influx of large funds and first-time individual investors, while many dedicated investors in the sector remained active. But BIO’s Dave Thomas warned initial financing of U.S. biotech start-ups is on a downward track to reach a 15-year low in 2013.

None of the IPO panelists were willing to predict a sustained flow of small-cap VC or IPO financing in 2014. But the high-profile flush of cash has some companies asking for money they don’t really need yet, some of the panel agreed. Meanwhile, all investors will keep a close eye on further evidence that the companies receiving major infusions, especially on the stock market, can continue to prove their case. Too much negative news in the sector could derail the train of bullish generosity.

“Crowdfunding in Healthcare & Biotech: Will It Bridge the Valley of Death?” had a small-company exec from Novita heading a panel representing traditional funders Knobbe Martens and Delphi, together with innovative funds Poliwogg and Breakout Labs. The panel agreed on one characteristic of early crowdfunding advocates: an idealistic commitment to making investment available to nonelite investors using the increased freedom to communicate opportunities under the JOBS (Jumpstart Our Business Start-ups) Act.

One thing crowdfunders share in common with all investment funds, however, is the challenge of raising money from people they don’t know. Companies must be ready to spend time communicating their case, as Andrew Merikel of Knobbe Martens suggested: “If you want people to invest in your company, you must invest in them!”

“Early Stage Venture Financing: Will Current Trends Continue in 2014?” was moderated by Luke Timmerman, the well-known columnist and vice president of life sciences initiatives at Xconomy. The panel covered a diverse lineup of VCs — Sofinnova, Versant, Third Rock, AbbVie, and 5AM. One common theme: VCs are still unhappy, despite the IPO boom. Even with some top performers in bio, returns for the venture crowd have not been great. Early-stage funding still depends on risk takers with rich pockets, but the multiple mid-stage failures are sinking in; there are fewer dreams, more sobering knowledge.

Another problem VCs have these days is with life science entrepreneurs who use the current bull climate for early-stage investment to drive a hard bargain in exchange for funding. “It’s actually better for VCs when the market sucks,” quipped one of the panelists.

Timmerman was brave enough to bring up a political threat to earlystage research and investment, and to life sciences R&D in general: the Congressional shutdown and near default of the U.S. government, on top of a sharp downward trend in research spending led by the same faction. In a nutshell, what I heard at BIF suggests a message the shutdown faction should heed: The life sciences industry hates politics in general, but it loves the NIH and the industry/government partnership the institutes represent.

BIF is a world where large pharma companies come as guests and are mentioned only in passing. On the West Coast, far from the old pharma centers of New Jersey, and now on the East Coast, but with Boston leading, Biopharma dominates all discussion of the industry’s future. Still, I believe it’s a mistake to count Big Pharma out, as some observers would like to do. People should remember that, in financial terms alone, Biopharma is still spare change in Big Pharma’s hip pocket. Although they weren’t talking much about big-company money at this year’s BIF, it may well be top of the agenda at next year’s forum.