A Global Biotech Player From Down Under

As more industry companies pop up and move outside the major biopharma hubs, they are developing ways to overcome time and distance and to participate globally by linking with leading research centers, other companies, and Big Pharma.

Relatively small Imugene in Australia has a big-league leadership team that includes world-class figures and scientists such as Professor Yuman Fong of the City of Hope, who heads its oncolytic-virus scientific advisory board, and Genentech veteran Leslie Chong, managing director and CEO. Adding top-tier talent like this into its top management is a conscious strategy employed by Imugene to ensure the company’s effective participation in the global biopharma industry.

Chong arrived at Imugene’s Sydney headquarters in September 2015 and immediately went to work. “You must have a real agenda from day one,” she says. “One of the things that drives me is this feeling of urgency — that things need to be done and I want things to be done.” She pored over all of the available data and talked to everyone on-site, but “not in a relaxed way as I would have at a Big Pharma or Big Biotech company. I just knew this little biotech company, where I had become the CEO, required me to learn everything about it from the start. And that’s actually paid off.”

As a clinical developer for the past 21 years, Chong’s primary focus was on developing a product. At the time, however, the question was still, “What is the product?” Any drug candidate would face certain questions: Is it scalable in terms of manufacturing? What sort of patients will the drug target in development? “Understanding the mechanism of action, the manufacturing, and how to put the drug into humans to see how it works so we can develop it effectively — those were my priorities,” says Chong.

Yet she also knew the CEO job would demand more than development expertise. It was a matter of minding the business. “The other part of being a CEO of a listed company is all about investors, and that was an uphill learning curve for me because I’d never dealt with that aspect. Luckily, I had my executive chairman, Paul Hopper, who is highly experienced at capital, investment, and managing the shareholders. He mentored me because learning to handle those areas took a lot longer for me than understanding development of a compound.”

Finding the right compound to develop was an exercise propelled and shaped mainly by the company’s origins. Imugene began with Hopper’s introduction to Professor Ursula Wiedermann at the Medical University of Vienna in Austria, who was researching a new approach to B-cell immunotherapy. He was greatly impressed with the science and the potential he saw for its application in oncology. Hopper, a well-known Australian “bio-entrepreneur,” had also chaired Viralytics, eventually sold to Merck & Co. for $500 million. He secured the license to Wiedermann’s B-cell technology and listed its developer Imugene on the Australian Securities Exchange (ASX) at the end of 2013.

With its science born in Europe and its founding in Australia, Imugene was global from the start. Soon it would begin to expand that presence by building a web of people, resources, and alliances that now spans across the equator and international dateline. Top management includes executives from numerous global biopharma companies and world-leading markets. Scientific advisors hail from major research and treatment centers in the United States, Europe, and the U.K.

Imugene recently obtained its oncolytic (tumor-killing) virus, CF33, from the City of Hope in Duarte, CA, along with its acquisition of Australia-based Vaxinia. Fong invented CF33 and is head of surgery and research at City of Hope. Several key scientists now associated with Imugene are Viralytics vets who helped form Vaxinia after the Merck-Viralytics merger. One of those is Dr. Fong. Imugene also has enlisted a large manufacturing facility at the Center for Biomedicine & Genetics (CBG) located inside the City of Hope, for supplying Phase 1 and 2 clinical trials of its cancer vaccines. 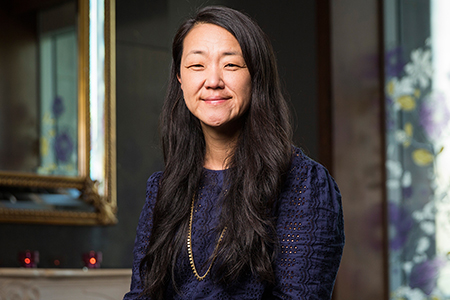 “The other part of being a CEO of a listed company is all about investors, and that was an uphill learning curve for me.”

Why Australia? Some will still ask. The obvious first answer is Hopper and his access to capital in that country. But Australia has another attraction; namely, the R&D rebate, in which the government gives back bio companies about 46 percent of all money they spend on research and development, including clinical trials. In Imugene’s case, the rebate even applies to Chong’s salary because of her chief responsibility for the company’s R&D.

But Imugene needed to have a global presence because it was entering the extremely crowded area in immuno-oncology. It was and is important for the company to distinguish itself in that field as reflected in the world-sourced science and technology it assembled in its products. “We have a limited amount of resources, so we have to design the smartest studies with the best experts in the field. We’ve hired or have consulting with us people who have developed oncolytic viruses before, and our scientific advisory board also consists of people focused on oncolytic viruses.”

Chong says the same rules apply to the company’s B-cell immunotherapy: “Because there’s nothing else like it out there, we make sure that we have people on board and consulting with us who have done B-cell immunotherapy cancer vaccines before and understand them. A small company like ours has to be nimble; we have to make quick decisions, but we have to do so with the experts in the field.”

Business development often falls under the general heading of investment, and partnering is a form of investment, but in practical terms, dealing with large prospective partners presents its own set of challenges. Big companies tend to wave off small companies with products that fail to fit into the larger one’s “oncology strategy.” The smaller company must establish how its products fit into the larger company’s strategic puzzle.

“Pharmaceutical companies don’t know what they need sometimes until they see it,” says Chong. “That is why clinical data is so important. Scientists are naturally curious about how the product works and how they can apply it in their puzzle, and that is what I focus on. I’ve also got to figure out my own puzzle before I can figure out how it fits into the bigger puzzle of a pharmaceutical company.”

A wider understanding brings more value into the equation. “First, you have data to show that you need to develop better tools to even know what you’re looking at, so you can understand exactly what’s happening. This is evolving. Innovation isn’t just inventing something new, it’s making things better, safer, and faster; that’s where innovation is going,” Chong concludes, expressing a thought that applies everywhere in the modern world, and certainly within this global company, which is taking innovation to the whole world from down under.