SNAPSHOT
Serina Therapeutics has billed its POZ (polyoxazoline) platform as the next generation of polymer-aided drug delivery, following logically from PEG (polyethylene glycol) and PEGylation, the drug delivery platform Serina’s founders first helped commercialize. POZ is designed for a wide variety of applications and therapeutic areas and may offer substantial advantages in terms of drug safety and efficacy. Serina has three drug-POZ conjugates in preclinical development, with the lead candidate, POZ-rotigotine (SER-214), a weekly injection for Parkinson’s disease and restless leg syndrome, headed to the clinic in late 2013 or early 2014 ahead of the other two candidates, both in cancer.

WHAT’S AT STAKE
The now-familiar method, PEGylation, attaches polymer filaments of PEG on therapeutic molecules to slow their elimination from the body, avoid immunogenicity, and eliminate receptor binding in certain parts of the body (e.g. brain). With some exceptions — enough to make room for a next-generation improvement — the technology has worked ideally for proteins, and there are 12 products in the market today that are PEGylated drugs. But its use has been limited largely to proteins. That is the cue for Serina’s entrance.

Serina’s POZ platform adds the advantages of low viscosity, high drug loading, and active targeting of drugs to the disease site. The precise targeting ability and large drug-carrying capacity of the POZ molecule is meant to optimize dosing and reduce side effects, especially with the famously toxic class of oncolytics. But POZ’s first application will likely be in an entirely different area where drug delivery is critical: Parkinson’s disease.

That points to one of Serina’s more unique and interesting characteristics: It is not waiting for other companies to license and use the POZ platform. Instead, it is pushing its own pipeline while it looks for partners. Its lead candidate, SER-214, went through IND (investigational new drug)-enabling toxicology studies in fourth quarter 2012, and results of a rat study in Parkinson’s disease will be published in early 2013. Serina will initiate a monkey efficacy study in late 2012, with results in mid-2013, “to confirm that repeat-dose administrations of SER-214 once a week for up to three months fully rescue Parkinsonism in the most relevant model available and will provide compelling evidence of being able to do the same in humans,” says its president and CEO Randall Moreadith, M.D., Ph.D. After formal GLP (good laboratory practices) toxicology is completed in mid-2013, a pre-IND meeting is planned for the third quarter of 2013, perhaps leading to the first human dosing in late 2013 or early 2014. “This is particularly exciting as this drug candidate may be advanced for several very important unmet medical needs — Parkinson’s disease, restless leg syndrome, levo-dopa induced dyskinesias, and impulse control disorder,” Moreadith says. The drug will be administered once a week with a standard insulin syringe and provide continuous dopaminergic stimulation (CDS). “A long-sought clinical strategy for these patients,” Moreadith adds.

The company may also be contributing to innovation in another area — financing. Moreadith recommends that more companies look at Serina’s $9.5 million “direct public offering,” completed in June 2011. “While the usual vehicle for this type of financing is VC funding, we elected to try something new. We approached several local business people in the Huntsville community and were elated at their enthusiasm for funding our programs at such an early stage. We brought in an additional two dozen new shareholders and closed the $9.5 million round within a few months.” 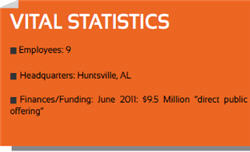 Moreadith says the company has sufficient capital to carry it through the next two years. After winning key patents for POZ earlier in 2012, it has been reaching out to potential partners for nondilutive capital to sustain company growth for another few years. Despite VC interest, “We don’t foresee a VC round in the near future,” he says. “Many of our existing shareholders have indicated they recognize the needs of a small company like ours and can step in with additional resources if the need arises.” Patient shareholders with an understanding of the challenges a small company faces in drug development? What a concept.