SNAPSHOT
Acetylon Pharmaceuticals calls itself an “epigenetics” company developing gene and protein modulating drugs — mainly selective histone deacetylase (HDAC) enzyme inhibitors for treatment of hematologic and solid tumor cancers and inflammatory, neurodegenerative, genetic, and parasitic infectious diseases. The company licensed its core technology from Harvard University and the Dana-Farber Cancer Institute. It completed lead optimization and preclinical development of its lead pipeline candidate, ACY-1215, in late 2010, and following successful completion of Phase 1a, it is now in two Phase 1b clinical trials, in combination with Revlimid (Celgene) and Velcade (Takeda/Millennium), for the treatment of multiple myeloma.

WHAT’S AT STAKE
I spoke with Acetylon President and CEO Walter Ogier at the BIO Investor Forum last October and then again more recently. There was already a trend noticeable at the event: therapeutic platforms for cancer, often alternatives to current “hot” approaches like targeted therapy, being developed for other disease areas. Acetylon is an exceptional but also exemplary case in point; its highly selective HDAC inhibitor platform seems to bridge several approaches in targeting a broad pathway in cancer cells by aiming at a specific HDAC which enables protein degradation to boost response rates and cut side effects. In comparison, the multi-HDAC inhibitors now on the market have notably traded only moderate response for major safety issues. Proteasome inhibitors successfully blocked the first route of protein degradation, but tumors are often resistant by utilizing the other main pathway: aggresomes, whose production depends on HDAC6.

Acetylon chose HDAC6 as its target based on the scientific founders’ pivotal work to determine the critical HDAC that promotes degradation and disposal of waste proteins, versus current inhibitors that target multiple HDACs, leading to substantial side effects: suppression of blood platelets, major GI symptoms, and fatigue (usually on top of other chemo and disease complications such as cachexia). The early clinical trials of the company’s lead candidate, ACY-1215, take the cautious approach of testing the drug’s action in combination with two standard drugs for multiple myeloma — a wise choice considering how difficult it is to design trials of new cancer drugs that can show a significant OS or even PFS benefit used alone. 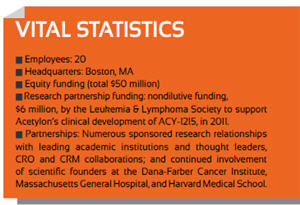 When I interviewed Ogier, we began by speaking of cancer immunotherapy, and I noted that quite a few companies pursuing that approach were also using their platforms to address other diseases as well. “In general, cancer has a lot to do with immune response and inflammation,” he said. “That’s where we got started down the path moving outside of cancer.” He added that one of the potential modes of action of HDAC inhibitors, and particularly HDAC6 inhibitors, is to raise the immunogenic profile of cells which may have evaded immune system surveillance. HDAC6 inhibitors are thus being considered for augmenting treatment of cancers dependent on cell surface antigen immune recognition. HDAC inhibitors have also been proposed as a means for clearing the body of latent HIV viral reserves in combination with a standard anti-HIV treatment regimen. “Our research has now taken us quite a bit further in elucidating mechanisms of action for HDAC6 beyond inflammation,” Ogier said.