Arsanis Biosciences Is Fighting The Nastiest Bacteria With Monoclonal Antibodies

A pioneer and crusader in the almost-abandoned field of antibiotics is out to show the world how to fight the nastiest bacteria with monoclonal antibodies.

SNAPSHOT
Arsanis is one of a few small companies pioneering the use of monoclonal antibodies in antibiotic therapies. Now on the cusp of transition from preclinical to clinical development, the company’s lead program is with a cocktail of antibodies directed against Staphylococcus aureus, the cause of severe hospital-acquired infections. Additional programs follow in gramnegative bacteria, Streptococcus pneumonia, and other infection areas. 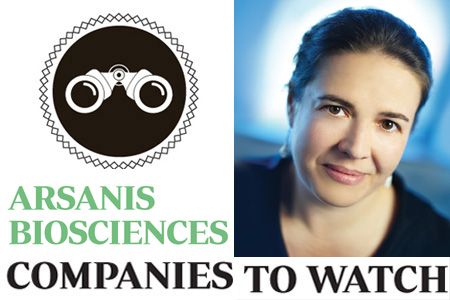 There is a good, if anthropic, reason why you have probably never heard of Arsanis: It qualifies under one of the natural selection criteria for “Companies to Watch” — obscurity. From its research origins in Vienna to its choice of the nearly deserted anti-infective area, the company has designed itself to fly under the radar of journalists prowling the halls of the recent BIO meeting to cover the hotter areas of biopharma innovation — cancer, diabetes, and senility. Its cofounder and scientific leader is similarly soft-spoken and understated in her description of the company’s founding premise.

“I developed the idea of using monoclonal antibodies, which are very successful in the cancer and in the autoimmunity areas, in the new field of infectious diseases,” says Eszter Nagy, MD, Ph.D., president and CSO. “It is a pioneering idea, but because of all my research and experience, I was convinced the antibodies are augmentative to antibacterial therapy.” Dr. Nagy points to the obvious gap in the current priorities of biopharma R&D. “The infectious disease field is in a crisis. It is the only field of medicine where we are actually going backwards, and some fear we will soon reexperience the pre-antibiotic era, when we cannot really treat certain infectious diseases.”

Companies have stepped away from developing new antibiotics partly because they are much less profitable than, say, cancer drugs, but also because they are used only for acute, not chronic conditions and face short product life cycles due to bacteria’s ability to develop drug resistance quickly. The Arsanis strategy addresses the latter set of challenges — extending use to prevention and life cycle by avoiding resistance. Many of its products combine several mAbs (monoclonal antibodies) in a single treatment, targeting the most virulent and resistant strains of bacteria. Unlike vaccines, the mAbs are likely to work even in immuno-compromised patients, and they avoid another weakness of current antibiotics, which “do not support immune defense or prevent damaging inflammatory responses,” according to the company.

Dr. Nagy worked for 12 years as an R&D leader at Intercell in Vienna and then moved on to join forces with Arsanis co-founder Tillman Gerngross, who is also the founding CEO of her company’s main partner, Adimab. Vienna, the base for her continuing research, has spawned its own biotech community, belying the creative vein that runs beneath the city’s conservative façade. With its corporate home in New Hampshire, however, Arsanis competes in the U.S. biotech sector, where its novel approach may have more opportunity but must also survive in the world’s toughest life science industry environment.

Arsanis has a broad pipeline targeting various bacteria species and strains. “We think our technology is applicable to all or many infectious diseases, and every bacterium is different so we cannot apply the same approach to every one. First, there’s a need to show that these antibodies work in various types of bacteria, and the first successes, not only clinical successes, but also when you publish your data for how they work in different disease models, can really help the field grow and encourage others to use this augumentative approach.” With sufficient arrays of mAbs and mAb cocktails, physicians will have a choice of tools based on each patient’s needs, in some cases guided by companion diagnostics.