One company is atypical in the industry for its use of patient and caregiver input to guide its drug-development journey. That shows in the program for its lead drug entering later-stage trials in treating Alzheimer’s disease. Insights into patients’ mental, physical, and even financial needs drive all aspects of the program, from discovery to clinical development to drug administration. Athira integrates such information beginning with compound formulation and ultimately in considerations for the care setting and institutional costs.

The company selected an economical small molecule compound over a hyperexpensive biologic, plans to use an adaptive Phase 2/3 trial design to transition from studying the drug’s short-term effect to its long-term effect, and seeks to achieve real-world patient monitoring and improved care through an app-driven drug-delivery system. This is a case of a company planning for the end market from the earliest possible stages of drug development onward, taking the whole patient into account.

The daily injectable drug appears to promote synapse growth over time, but with an almost immediate and dramatic effect on synaptic activity on first treatment. Through downstream pathways, the drug also interacts with an NMDA (N-methyl-D-aspartate) receptor in a neurotransmitter system central to long-term cognition, memory, and general brain function. The mechanistic approach of NDX-1017 is “agnostic” to the cause or type of the underlying pathology, and the company sees the basic principle of activating the HGF/MET pathway as applicable more generally to neurodegenerative diseases and conditions.

Athira’s lead drug is a frank departure from the still-dominant but troubled amyloid-beta approach to Alzheimer’s, which looks at a biomarker as the cause of disease. Athira’s drug does not directly target an underlying disease cause, but a common consequence of neurodegeneration leading to impaired cognition and memory. It has both symptom- and disease-modifying potential. It may also introduce a different view of patients and the healthcare market.

Leen Kawas, president and CEO, says her company configured the drug with a ground-level view of practicality and cost. It would be a small molecule compound with a potential for both fast-action “procognitive” and long-term synaptic benefits. Market analysis and clinical studies would address market and medical needs. An adaptive trial would potentially branch into two separate arms with symptomatic and disease-altering endpoints, adjusting the sample size to power the study and demonstrate statistical effects. A high-tech, patient-friendly approach to drug administration could supercharge patient monitoring and data-gathering. And all along, Athira would apply patient, caregiver, and physician input to the drug’s development.

“Our market-analysis study actually showed benefits in the way that we’re developing our drug,” Kawas says. “We are not doing ultra-expensive biologics. Small molecules are time- and cost-efficient to manufacture. We’re keeping the patients and their families up front in our thoughts and planning. We can’t deliver a therapy that is $100K per year because they need to afford it, and how would Medicare and Medicaid actually respond to these expensive approaches? We would have to run a half-dozen studies to show the economic benefit to justify the reimbursement.”

Although the chemical entity is well-characterized — simplifying its current development — Athira selected it for a particular profile. At the top of the list was the molecule’s fast-acting, symptomatic action, the result of how and where it interacts with its target receptor. “This molecule activates the HGF downstream in the pathway,” Kawas explains. “That is why it causes immediate effects. We also expect regeneration and protection against inflammation, and we expect this to produce long-term changes, improving connectivity and brain circuitry that truly alter the disease course.”

To reconcile two short- and long-term benefits in a single program, Athira’s solution was an adaptive Phase 2/3 study on two parallel paths — one for the immediate symptomatic indication, the other for long-term disease modification. The symptomatic path normally requires only a six-month trial, and if the studies demonstrate clinical benefits, Athira will fast-track the regulatory approval process for the symptom-altering indication. The Phase 2/3 trial would then transition to a postmarket Phase 3 trial, completing the disease-modifying program for a subsequent NDA submission.

“Disease-altering is a more challenging endpoint, but it’s where the true long-term value for the patients lies,” Kawas says. “Our goal is to deliver effective, accessible therapies as quickly as possible to patients, and the most efficient, de-risked way that we can do that is take the information we have right now, optimize the next phase for a disease-altering approval, and get the symptomatic therapy approved initially.”

Biomarker development and measurement are also built into the trials. Rather than imaging a plaque or other substances in the brain, Athira’s trials primarily rely on an EEG to measure changes in brain-wave activity, especially gamma waves, which reflect synaptic activity, a strong sign of memory formation, executive function, and working memory. 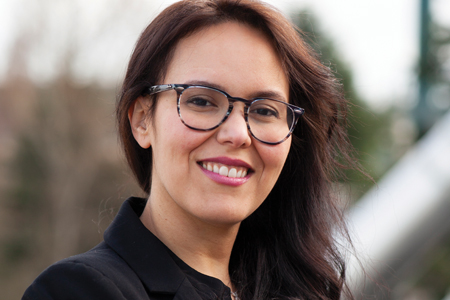 "Disease-altering is a more challenging endpoint, but it's where the true long-term value for the patients lies."

Kawas points to an early-in-development signal of the drug’s long-term effects: “In our Phase 1b trial, we used EEG, essentially a brain echo of electrostimulation as a measure of brain activity, or the speed by which the brain responds to stimulation. And we’ve proven preclinically that we’re able to reverse the pathology and increase the speed by which our brain responds to stimulation. We believe we will show similar results in the clinical trials as well.”

The Phase 2/3 trial will include patients with mild to moderate stages of the disease, for a specific reason, according to Kawas: “We’re enrolling patients with moderate Alzheimer’s disease because we are pursuing a symptomatic endpoint. It is a placebo-controlled trial. After we complete the treatment, we will watch the subjects for six additional weeks without active treatment to start looking at disease-modifying activity in the brain reflecting the changes that we are introducing in neuronal growth. That will set us apart.”

ALL IN THE DELIVERY

With NDX-1017, the envisioned marketed product would be administered with a pen injector to promote compliance by patients typically prone to swallowing and memory problems. Again, the choice followed from discussions with neurologists, caregivers, and early-stage patients about the product profile. The injector could link to a smartphone app that prompts administration, collects patient data, and provides real-world evidence. The Phase 2/3 and 3 trials may also use the injector with app to collect clinical data.

Athira also uses some soft methods to improve patients’ clinical-trial experience, participation, and completion rates. A simple agenda for the days they report to the clinic eliminates the confusion that commonly happens when patients and caregivers wait unattended for hours, often in the same room with patients from other trials. Athira also tries to avoid computer entry and tests for patients to ease their stress.

Such considerations again reflect the company’s overall focus on whole-patient drug development — from molecule to market reality. “If you bankrupt the person or the family to deliver a therapy, that doesn’t make sense. We’re focused on improving the quality of life overall,” says Kawas. In this small company, such foresight and commitment is impressive, but at the same time, likely to prove eminently practical.