Strong federal support and a unique model centered on biodefense therapeutics and vaccines drive this company — and our interest in it.

SNAPSHOT
Soligenix is a public, biopharma company primarily focused on developing new vaccines and “BioDefense” treatments for public threats such as ricin and radiation, as well as “BioTherapeutics” in cancer and other conditions — with strong federal support. Its product of most current interest is RiVax, a vaccine to protect against ricin poisoning, now entering Phase 2. RiVax has received U.S. federal funding and, if approved, would likely be purchased under government contract. OrbeShield, a therapeutic for GI Acute Radiation Syndrome (GIARS), was also largely funded by the government, which will be its primary customer. In the bigger picture, the company is developing the ThermoVax platform, which could eliminate the cold chain for many vaccines.

Unmet medical need goes beyond specific conditions or diseases. One significant but more general need in the vaccine area is for greater stability. Like many biologics, vaccines have traditionally faced the hurdle of temperature and, thus, required an expensive and often impractical cold chain, hindering distribution to areas without reliable, or any, refrigeration. Schaber says its ThermoVax-based vaccines can be stored for more than six months at up to 40 degrees Celsius. “With this technology, we can now pursue partnerships with other vaccine companies and nonprofit groups that are looking to take their already marketed or development vaccines out of the refrigerator and stabilize them for room temperature storage.” 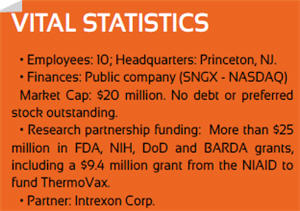 Soligenix is still in the early stages of partnerships. “A small biotech company like ours must remain opportunistic, looking at all avenues to move the company and our programs forward while maximizing shareholder value,” Schaber says. The recently announced alliance with Intrexon adds yet another area to its disease focus — codeveloping a therapy for the potentially fatal infection melioidosis, caused by the gram-negative bacteria burkholderia pseudomallei. He feels confident in the management talent as well as the science Intrexon brings to the table, citing its chairman and CEO, R.J. Kirk, as “a well regarded figure in the life sciences industry for his many successes.”

For its unique funding and business model, its novel technologies and products, and for its partnering potential, Soligenix will remain a company to watch well into the future. Whether it remains in the headlines once the ricin scare fades is yet to be determined. But considering the company’s orientation toward some of society’s greatest recurring terrors and threats, it will not likely stay in the shadows for long.