An entrepreneurial venture grows up inside Janssen R&D.

SNAPSHOT
Centyrex is a start-up platform and development company that originated inside J&J’s biopharma R&D organization in 2008. Its platform consists of “alternative scaffolds” (AS), small simple proteins usually associated with monoclonal antibodies but engineered for superior stability. The company’s AS molecules are called “Centyrins.” Although the technology is still in its infancy, AS combined with modern protein engineering allows the design of exceptionally stable proteins that can be administered to patients in new ways. One of the original aims of Centyrex was to develop a normally oral asthma drug delivered directly to the lungs with an inhaler, a device formerly used only for small-molecule drugs. The company has since demonstrated successful inhaler delivery of the drug with its AS technology.

LATEST UPDATES
With the worldwide research collaboration and licensing agreement between Amunix, Inc. and Janssen, Amunix will combine its XTEN half-life extension technology with protein and/or peptide therapeutics selected by Janssen. The Amunix technology is expected to provide a half-life extension strategy for the small-protein scaffolds (Centyrins) created by Centyrex.

WHAT’S AT STAKE
Try googling Centyrex — go ahead, try it — and you will not find even the minimum press release-driven media coverage afforded most other life sciences start-ups with public announcements of funding and development progress. For, although the company operates and survives on its own merits like any other company, it does so as an entrepreneurial unit tucked away inside the great onion-layered edifice of Johnson & Johnson. Centyrex CEO and “Venture Leader” Robert Hayes and CSO Karyn O’Neil formed a team and presented a business plan for the “alternative scaffold” start-up, and they have run the company since they won initial funding from the Johnson & Johnson Development Corporation five years ago. Hayes’s and O’Neil’s background in protein engineering and previous work with mAbs and peptides had sparked their interest in AS development.

“Developing our own AS platform gives us the freedom to move alternative scaffolds into areas that are not being explored by other companies,” Hayes says. “We have the luxury as a venture within Janssen and with broader J&J support.” In the beginning, Centyrex focused on pulmonary drug candidates. Since then, it has steadily increased the number of new therapeutic applications of its proprietary Centyrin scaffolds.

“Recently we have been using alternative scaffolds in quite different ways, such as nanoparticle technology,” he says. “We are combining material sciences and alternative scaffolds together to form novel drugs in therapeutic areas of interest. For example, scaffolds allow nanoparticles to be targeted to different tissue types or different organs, perhaps even including across the blood-brain barrier. Where biologics and material science meet is the future for drug development; it is truly innovative science that will provide translational drugs to patients in the future.”

The application of Centyrins to nanoparticles is due to their simplicity — they can be easily attached to particles, and they have an exceptionally high tolerance of harsh manufacturing conditions. Centyrins can be “labeled” to bind to specific tissues and cell receptors, so they may be useful for imaging, specimen selection, and tumor analysis during surgery. AS technology may also offer advantages in formulation and stability, for example, eliminating the need for a cold chain for protein-based drugs.

Hayes is realistic about the potential of this platform as therapeutics: “The competitive barrier in AS development is the inherent technical challenge of creating scaffolds that don’t fall apart when the proteins are tweaked for particular applications and ensuring that these molecules have the half-lives that allow convenient dosing to patients. Some AS proteins have also proved to be immunogenic or prone to aggregation, or cannot be manufactured in a cost-effective manner.” He believes the promise of a superior AS platform was “something clearly appreciated by Janssen’s senior management when it agreed to support the creation of Centyrex.” 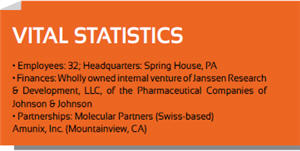 If Hayes is right, the advantages of alternative scaffolds will inevitably win over a large segment of the industry, and AS will become a dominant platform for many new drugs, devices, imaging technologies, and various hybrids of those categories. Centyrex is worth watching, both as a leader in the space and as an interesting hybrid in its own right — the venture inside the corporation.