Stay small, pick your target, and prove your concept — the simple game plan of this tiny but tough player in the rough-and-tumble neurology area.

SNAPSHOT
A tough cookie in a tough area — a good way to describe Cognition Therapeutics (CogRx) and its quest for innovation in neuroscience. CogRx is a small, early-stage developer of new drugs intended to treat Alzheimer’s disease and possibly other conditions such as Parkinson’s and ALS. The company believes it has a novel, potentially effective mechanism for blocking beta-amyloids and other misfolded, neurotoxic proteins. It is built on a lean-staffed but scientifically heavy model, focused on funding proof-of-concept studies in a Phase 1 trial of a novel small-molecule Alzheimer’s drug, with a targeted launch of 2014.

WHAT’S AT STAKE
CogRx is especially interesting for three reasons: its tiny size and scaled-down funding model, dense concentration of scientific expertise, and ambitious agenda in neuroscience, a field where much larger players have met with defeat. And the backdrop to the company’s courageous quest is the cruel environment for early-stage contenders. Its singular survival strength is simple but amazingly overlooked by many start-ups: Take your science from bench to human as quickly as possible, understand the disease mechanism and pick your therapeutic target, define and refine your drug modality, and pursue proof-of-concept with maximum speed and efficiency.

“The discovery and development program has delivered first-in-class receptor antagonists against the toxic forms of the Abeta protein. No other company has this asset at this time. And while the science has gone very well, the funding remains our biggest challenge,” says CEO Hank Safferstein, Ph.D.

CogRx has placed its chips on the beta-amyloid theory of Alzheimer’s and on similar protein-folding mechanisms for other CNS conditions such as Parkinson’s. The Abeta protein consists of “oligomers,” a specific shape of accumulated beta-amyloid that binds with and destroys neurons in the brain. The company has developed several small molecules that block abeta at a particular spot in the binding site its scientists have identified as critical to toxicity. It has developed and used its own novel screening and chemistry platforms to select candidates based not only on binding ability but also on resulting improvement in neural function. “We have been able to achieve this with approximately 70 percent less funding than our venture-backed peer groups,” Safferstein says.

So far, CogRx has raised only about $8 million and estimates it needs another $14 million “to advance the IND (investigational new drug) candidate from our lead series to clinical proof of concept, complete optimization of the backup series to IND candidate stage, and further define the signaling pathway’s downstream from receptor binding,” says Safferstein. “We believe these pathways may be implicated in other CNS proteopathies. The company is putting together a Series B to cover that amount by Phase 1 launch and eagerly seeking a commercial partner.” With a large field of potential competitors in Alzheimer’s and other neurodisorders (more than a half-dozen already have signed with major companies), CogRx must surely be getting Big Pharma’s attention. 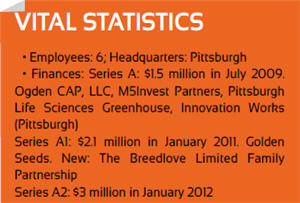 As large pharmas “externalize” their R&D, Safferstein suggests the picture can get even more challenging for companies with novel approaches. “Without people within R&D to vet the technology, it becomes increasingly hard to foster innovation using this partnered external development model,” he says. He believes pharma venture funds can help bridge the “funding and diligence gap” to position companies such as CogRx as external development partners.

It may also help to have a simple plan — the company’s next move is to fund the advancement of its Alzheimer’s program to proof-of-concept in the clinic. “We can discuss preclinical validation until we are blue in the face, but the only validation that counts is clinical validation,” Safferstein concludes. It’s a big jump to make.