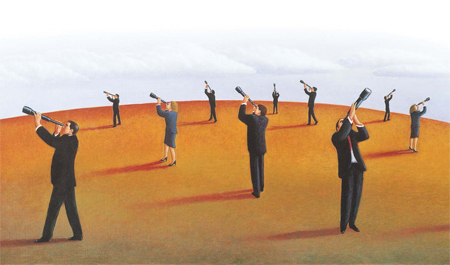 The "Companies to Watch" column appears in these pages every month, each time giving a brief but analytical look at a company with its own products in development, relatively little press coverage to date, and a recent milestone accomplished. Most important, the company must have an interesting and instructive story to tell, highlighting the key lessons it has learned in starting, scaling up, and steering the company toward its ultimate goal. This month, for the second year in a row, we share updates from the companies featured in the previous year. We rounded up the statements that follow from the leaders of our Companies to Watch 2014 lineup.

We asked each company executive to answer a single question: What have been the most important developments for your company since it was featured in Life Science Leader’s "Companies to Watch," and what developments or milestones do you anticipate in 2015? Naturally, CtW companies covered later in the year tend to report less progress and more forward- looking objectives for the new year. Reflecting shifting priorities common in startups, a couple of companies chose not to respond at all, whether because they had no news or perhaps too much disruption, such as a turnover in management, to address in this context. Where public information was available, we supply updates about the nonresponding companies.

Almost all of our 2014 Companies to Watch did respond, however, and their comments reveal much about how they assess their own state of being in the new year. Their stories continue to unfold — blazing new trails, creating new models, and supplying new lessons for life science leaders.

Protagonist Therapeutics
The world has long awaited stable oral peptides as a potential replacement for many injectable drugs. Will this company be the hero?

“Over the past year, Protagonist has made significant advances in progressing its ‘oral peptide-based targeted therapy for inflammatory bowel diseases’ from research to development. We have nominated our first development candidate, PTG-100, and expect to file an IND (investigational new drug) and initiate Phase 1 clinical studies in 2015. We also successfully secured the second tranche of our Series B financing, and are using these funds to progress PN-884 into clinical trials, expand our pipeline with other oral peptide assets, and build out a strong R&D and executive team.”

The Companies-to-Watch Roundup for 2013 took the place of a monthly CtW column in this month. This year, in addition to the CtW Roundup 2014, the regular monthly column for February is back in place, featuring Tetra Discovery Partners.

Otonomy
Not to build a platform, but to create new, FDA-approved therapeutics for unserved indications in the ear, this developer focuses on novel delivery.

“We have made considerable progress in advancing our product pipeline, and significantly strengthened our balance sheet. In July, we announced the successful completion of Phase 3 trials for our lead product candidate, AuriPro, in the treatment of pediatric patients undergoing tympanostomy tube placement surgery and intend to file the NDA in the first half of 2015. We also recently announced the achievement of the patient enrollment target in the first of two pivotal studies for OTO-104 in patients with Meniere's disease, and expect to have results in 2Q 2015. We continue to advance our third product candidate, OTO-311 for tinnitus, toward an IND filing in 2015 and recently announced the licensing of nonclinical and clinical data for the molecule that will support our development and regulatory filing efforts. With regard to financing, we completed an oversubscribed Series D financing in April that totaled $49 million and included a number of well-respected public investors and then completed a successful IPO in August that raised net proceeds for the company of $104 million. The IPO was completed at the top end of the price range, and we increased the size of the offering in response to strong investor demand. We expect that the funds raised during 2014 will support the company through AuriPro's approval and commercial launch in the U.S. in 2016.”

Synthetic Biologics
Following a failed drug, a company retrenches and reinvents itself as a developer of new biologics with novel mechanisms focused on serious infections and other diseases.

“Synthetic Biologics made exceptional progress during 2014. By mid-2015 we plan to have two potential multibillion dollar pathogen-specific drug candidates in Phase 2 trials and expect topline cognition data from our Phase 2 multiple sclerosis drug (another potential multibillion dollar market). SYN-004 may be the first potential point-of-care therapy to protect the gut microbiome, thereby preventing C. difficile infection, an urgent public health threat for hospital patients receiving commonly used antibiotics. We initiated a Phase 1A clinical trial of SYN-004 in December 2014, with topline data expected by year end 2015, and a Phase 2 trial is planned for 2015. Another pathogen-specific candidate, SYN-010, is intended to reduce the impact of methane-producing organisms on constipation-predominant IBS (C-IBS). This groundbreaking approach targets the underlying cause of C-IBS, not just the symptoms, with potential application to obesity and diabetes. We plan to initiate a Phase 2 trial of SYN-010 in mid-2015.”

Savant HWP
Industry experience and sound business principles guided the start-up and widened the portfolio options for this knowledgerich company.

“Savant HWP made outstanding progress in 2014, validating our business model, advancing and de-risking our addiction medicine and neglected disease programs, and acquiring yet another clinical- stage program, this one in headache pain. By completing the first-in-human phase of the 18-MC project without incident and in under two years from program initiation, the Savant team successfully demonstrated the strength of our leveraged approach to developing novel, high-impact products and the success of the 18-MC rational drug design program by eliminating in humans the dangerous side effects of the parent compound, ibogaine. The new clinical-stage program in headache pain positions Savant on the front lines of central nervous system drug development — medicines that address brain disease by altering the brain’s regulation of neurotransmitters. The coming year will be marked by the advance of our programs into patients as well as healthy volunteers, the acquisition of additional clinical-stage opportunities, expansion of our operations in Europe, and our first significant equity financing.”

Protalix BioTherapeutics
Using plant cells instead of mammalian cells to produce protein drugs, plus a partnered product already on the market, possibly put this player in the lead.

[No response from company. The following updates are public information.]
Late last year, in September 2014, Protalix replaced then-president and CEO David Aviezer with the current president and CEO, Moshe Manor, who did not respond to our request for an update in the CtW Roundup. In August, Pfizer and Protalix BioTherapeutics had announced FDA approval of a pediatric indication for Elelyso (taliglucerase alfa), for treatment of Type 1 Gaucher Disease.

Second Genome
Beyond the human genome lies the much vaster field of the microbiome, where this company is finding new disease mechanisms, biomarkers, and therapeutics.

“The biggest update is that the company has initiated a collaboration with Mayo Clinic to support research in up to eight disease areas. This includes metabolic disease and inflammatory bowel disease (disorders the company had previously discussed research in) and a new area — colorectal cancer. There will be up to five additional therapeutic areas disclosed at a later date. The company continues to move forward with its internal pipeline and existing partnerships.”

Arsanis Biosciences
A pioneer and crusader in the almost abandoned field of antibiotics is out to show the world how to fight the nastiest bacteria with monoclonal antibodies.

“As part of its mission to target severe infectious diseases that are not effectively controlled by currently available treatments, Arsanis has recently identified and published a potential novel clinical biomarker for ventilator-associated pneumonia in a leading scientific journal. A further high-profile publication is expected in early 2015 describing the unique mAb which cross-neutralizes five different S. aureus toxins, including alpha-hemolysin, which is part of the ASN100 product, Arsanis’ lead program targeting severe S. aureus infections. ASN100 is currently in development with a leading contract manufacturing company. During 2015, Arsanis will move closer to first clinical testing of ASN100 aimed at preventing S. aureus VAP and expects to nominate the lead candidate antibody for its E. coli program, targeting a globally spreading multi-drug-resistant E. coli clone.”

Ennaid Therapeutics
Inspiration and business sense combine in this enterprise dedicated to developing the first cure for dengue-virus infection and other global disease threats.

No updates. Company did not respond.

Nora Therapeutics
This company’s novel and lonely development of a new fertility drug belies the industry’s current lack of interest in the field.

“Nora Therapeutics’ RESPONSE Research Study has been progressing as planned. RESPONSE is a randomized, double-blind, placebo-controlled, multicenter clinical study in Europe to evaluate the efficacy, safety, and tolerability of NT100 (our lead product) in women with a history of unexplained recurrent miscarriage. Top-line results from the RESPONSE Research Study are expected in the fourth quarter of 2015. We are optimistic that NT100's mechanism of action may reduce the risk of miscarriage by optimizing maternal-fetal immune tolerance. If successful, NT100 could fill a significant unmet need, as there are currently no approved therapies for women with recurrent miscarriage.”

BEAT BioTherapeutics
With what it believes is a breakthrough gene-therapy approach, this early-stage company hopes to shake up the huge heart-failure space.

No updates. Company did not respond.

“Of course, we had little time for subsequent developments in 2014. But we are excited about the planning for next year. We also believe that we will see significant changes in our healthcare systems, as many people are determined to stay independent in old age. We see many technical innovations being implemented already, and it is very likely that pharmacotherapy will become more important to empower our elders to age independently. After many years of talking, I foresee that 2015 will be the year of real changes. And as 10,000 Americans turn 65 every day, these innovations will need to bring value-for-money to a group of very experienced consumers and critical healthcare payers. These are the challenges that we have put at the heart of our drug development program. With the promising results of the first clinical studies, we have come one step closer to making a difference in the lives of many. In 2015 we hope to make the next step!”

The following are some expectations the company has for 2015: