Flipping the off switch in rare, chronic inflammatory diseases. 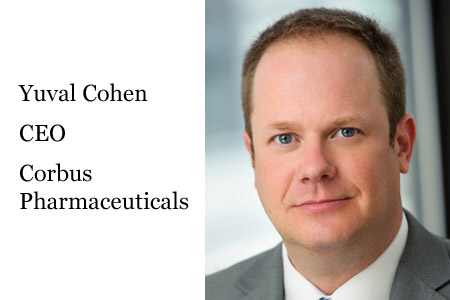 Corbus has the CB2-agonist Resunab (ajulemic acid) in development for three rare, chronic inflammatory indications: cystic fibrosis, systemic sclerosis, and dermatomyositis. The small-molecule compound is a “repurposed pharmaceutical.” The drug triggers the mechanism or pathway by which inflammation returns to homeostasis (resolution of inflammation), allowing damaged tissue to heal. Phase 2 studies have begun in the first two indications, and a Phase 2 trial in CF will begin soon.

WHAT’S AT STAKE
A flare, a flame, a fan of fire spreading over fields and forest — a fitting image for inflammation, the inevitable and most often indispensible condition of having an immune system. Inflammation burns through hostile microbial invaders, damaged cells, and substances, but at times, unfortunately, healthy tissue as well, sometimes setting the stage for subsequent disease processes to unfold. Among the most consequential of the possible morbidities are cystic fibrosis, systemic sclerosis (or “scleroderma”), and dermatomyositis. Corbus is staking its future on developing new agents to address those diseases through the mechanism underlying all of them — an inflammation “off switch” related to the CB2 receptor pathway.

“We are focused exclusively on rare orphan, serious, typically life-threatening inflammatory diseases, often associated with fibrosis,” says CEO Yuval Cohen. “Morbidity is typically severe, even terminal, as in cystic fibrosis, or very life-threatening as in scleroderma and dermatomyositis. There are about 8,000 orphan diseases, and more than half of them involve inflammation. What they all share in common is an immune system that basically won’t shut up. It is activated and unable to restore itself back to normal.”

Usually, of course, the immune system turns on in response to something like a pathogen, destroys the intruder, then turns itself off. By simple logic, then, immunity has an on switch and an off switch. Each one is different from the other, however, and both consist of extremely complex pathways. Anti-inflammatory drugs generally try to “jam” the on side of inflammation, which offers no single target for resolving the condition. But the Corbus approach is to trigger the off side — a step-by-step process called resolution — thereby restoring homeostasis and healing in the affected tissue. The trigger is CB2, a white-blood cell receptor that, when inflammation is involved, turns the “off” process on. Lead candidate Resunab binds with CB2 to initiate resolution. The FDA has given orphan designation to the compound in scleroderma, and Cohen expects the drug to receive orphan and fast-track status potentially for all three indications ultimately.

Most of the Corbus management team members have extensive drug-development experience and many have a Big-Pharma background, such as board Chairman Alan Holmer, the former president of PhRMA itself. By no coincidence, Cohen notes the “undisputed leader” of the inflammation-resolution field, Professor Charlie Serhan of Harvard Medical School, is on the company’s scientific advisory board.

The company plans to acquire more assets but is committed to targeting rare diseases only, according to Cohen. “We are building a conveyor belt. We will find new assets in pharma or biotech or academia, then modify them if necessary, direct their development, and thus build a clinical program in rare inflammatory diseases — which will give us the luxury of avoiding sale of the company and thus have a happy ending to the story.” The ending may include the company marketing and selling its own products, he says.

By Cohen’s estimate, Corbus might need only three to four dozen reps to cover the cystic fibrosis market or any of the others it will target in the U.S. Most states, he says, have only one or two major treatment centers for CF, scleroderma, or dermatomyositis. He does allow, however, that the CB2 mechanism could apply to diseases with much larger populations, on the scale of asthma or arthritis, possibly spelling the need for commercial partnerships in the company’s future.

NIH grant for dermatomyositis Phase 2 clinical trial at U. Penn