Esperion Therapeutics, Does Their Cholesterol-Reduction Drug Have "Blockbuster Potential"?

A small-cap company braves the new world of blockbusters.

SNAPSHOT
Esperion Therapeutics is a relatively young company and newcomer to the public stock market. As such, it provides us with an instructive picture of a life sciences start-up in transition, perhaps to something much bigger — or perhaps to the oblivion many small-cap companies enter when their late-stage trials fail to fulfill early-stage expectations. Esperion is about to begin a Phase 3 trial in the cholesterol-reduction area, a market currently dominated by the “statins,” which fail to work or cause serious muscle spasms in millions of patients. Esperion’s lead clinical candidate, ETC-1002, using a new mechanism, appears to lower LDL cholesterol (LDL-C) with relatively high tolerance. Could “blockbuster potential” be too strong a term?

WHAT’S AT STAKE
What could be in store for Esperion Therapeutics, one of the relative few midstage developers of new drugs with blockbuster potential in a sea of niche and specialty products now coming on the market? Esperion was also one of the companies to join the “Biopharma Spring” outpour of IPOs just as it was completing its key Phase 2 trials. At least a half-dozen of the most recent FDA approvals have gone to blockbuster candidates, a significant sea change from last year’s wave of niche drugs. Esperion could be headed for membership in that elite club — perhaps, with its drug ETC-1002 helping revive some of the sheer market energy that once made primary care the king of pharma. “Success for Esperion will be if ETC-1002 completes clinical development, is approved, and is prescribed by physicians for the millions of patients who can’t tolerate statins or can’t get to their LDL-C goal,” says the company’s CEO, Tim Mayleben.

Esperion has evidently prepared itself for Phase 3 with an extensive Phase 2 program of seven separate studies for proofof- concept, safety, and efficacy in a multitude of patient populations and ancillary conditions. The common theme, however, is LDL-C reduction in people who either fail to benefit or cannot tolerate statins. As Mayleben suggests, the pool of potential patients runs into the millions, opening up the prospect that Esperion’s drug could achieve blockbuster status alongside a continuing statin market. “We don’t intend to compete with statins,” he says. “We believe that statins are one of the most successful and important classes of drugs ever invented for lowering LDL-C and reducing cardiovascular disease risk. However, many patients with high LDL-C can’t tolerate statin therapy and remain at elevated risk for cardiovascular disease.” 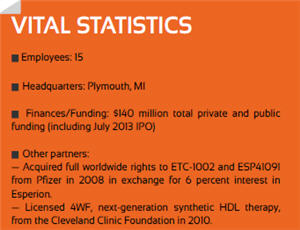 Esperion is focusing initially on those who never find a statin they can tolerate, about two million patients in the United States, but in the longer term, it will also focus on the statin-resistant population, about 11 million U.S. patients, who have no good treatment alternative. The company has done well in raising private equity financing through its Phase 2 trials, but Mayleben says public money was essential for its Phase 3 program. It has experienced no great hurdles in clinical trials and expects none ahead. Its confidence may stem partly from having company founder Roger Newton aboard as chairman and CSO. A former R&D head at Warner-Lambert and Pfizer, Newton codiscovered Lipitor. Newton’s legacy also proved useful in the company’s public offering, according to Mayleben.

“The IPO process was very straightforward — over the span of nine days, Roger and I visited several dozen investors across the U.S. and the EU, many of whom remembered us from the original Esperion and who were keen to support the new Esperion.”